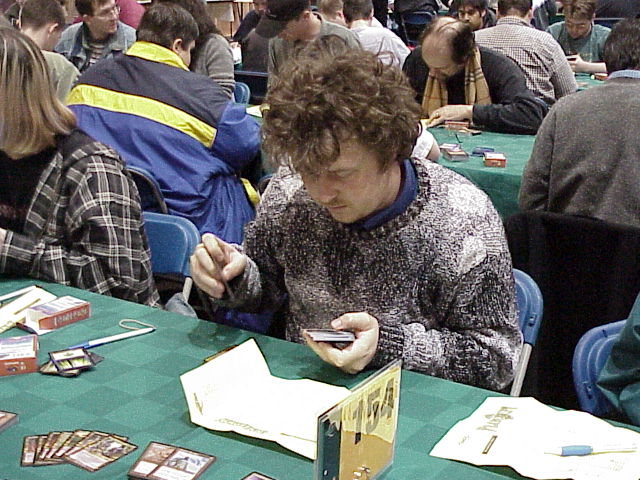 These two have 8 Pro Tour Top 8's between them. That's four apiece! Another thing they turned out to have in common is that they both drafted black/red decks. Comer showed why he went black/red on turn 4 of game 1: Blazing Specter. Rose didn't have an answer until he drew Fact or Fiction. Comer split the five revealed cards into Terminate, Swamp or Morgue Toad, Rogue Kavu, Caldera Kavu. Rose thought for a while (which is rare for him!) and took the three monsters, though he had to immediately discard Morgue Toad to the Specter.

Rose decided his plan for the game was "race." He dropped Caldera Kavu and Shivan Zombie and then had to discard his 4th card to the Specter - Rogue Kavu. With Lava Zombie also in play on his side, "race" looked like it might work. However, Comer played a Lava Zombie of his own, along with a Firebrand Ranger and a Mourning. The Caldera Kavu traded with Comer's Lava Zombie and Rose then Zapped away Firebrand Ranger. The race looked like it was swinging to Rose, but Comer unveiled his secret technology: Keldon Mantle! Now the Specter was hitting even harder. With Rose on 8, and Comer with Death Bomb in his hand, Comer found himself just one land short of winning. He couldn't attack, though, or he would die to the counter-attack (with Rose on 1). He therefore left the (regenerating) Specter back on D and Kyle couldn't attack effectively at all. Comer used his extra mana to cycle through a Stun and his two draws failed to produce the land he needed. What he did come up with was another blocker - Slingshot Goblin. He served with the Specter, setting himself up to win on the next turn whether he drew a land or not. The problem was that Rose had Agonizing Demise with kicker ready and pointed it at the Goblin. Comer could fizzle the Demise with his Death Bomb, but you can't Death Bomb a Lava Zombie so Comer lost. (It turns out a land wouldn't have actually won him the game because when he used Death Bomb for the last two points of damage, Rose would have Demised his own creature to fizzle the Bomb.

Kyle Rose is amazing. He got hit by Blazing Specter 6 times in that game and won anyway.

Rose killed Comer's first three decent creatures in game 2, but Comer had Demise for the only good one that Rose played. The players found themselves in a bizarre midgame situation where Comer's Phyrexian Battleflies with Keldon Mantle on them became a huge offensive and defensive threat. Rose sacrificed his Morgue Toad to play Fact or Fiction and this time Comer's split was Wash Out, Mountain or Caldera Kavu, Shivan Zombie, Island. Rose once again took the pile with three - he loves those 2/2 creatures and both came into play on his next turn. The Flies served for 5 and then 6 and then Kyle drew a card and couldn't hold in a chuckle saying "That may have been the only card I could have drawn." When Comer attacked for the last four damage Kyle played Crosis's Charm to return the flies to Alan's hand. Two old fashioned Battleflies attacks later, though, Kyle was dead anyway.

Kyle's deck, which even Comer admitted was probably better than his and definitely faster, came out quickly in game 3: Shivan Zombie, Morgue Toad, Morgue Toad. Comer had an excellent answer though: Urborg Shambler. Rose played a Lava Zombie in the hopes of trading with the Shambler, but Comer had Magma Burst ready. When Comer followed on his next turn with Blazing Specter, Rose knew he was in trouble. His pair of 1/1 Shivan Zombies just wasn't going to get it done. Soon he was in chump block mode and soon after that Comer had advanced to the semi-finals.