The inherent drama of a crucial topdeck has created some of Magic's most epicmoments, searing them into our collective memories. While being rewarded for having the heart of the cards in a moment of dire need can certainly result in an unparalleled rush of euphoria, being at the mercy of the deck also has its twisted dark side, as both Matej Zatlkej and Makihito Mihara found out in their thrilling, yet frustrating Quarterfinal match.

Makihito Mihara needed all five games to snag victory, but he was finally able to push through for the final points of damage in a very back-and-forth match that showed how powerful the top of the deck can actually be.

"Before we begin, I just want to say that I have a great amount of respect for you as a player, and no matter who wins, I will be happy," Zatlkaj offered, showing his reverence for Mihara's tremendous accomplishments. 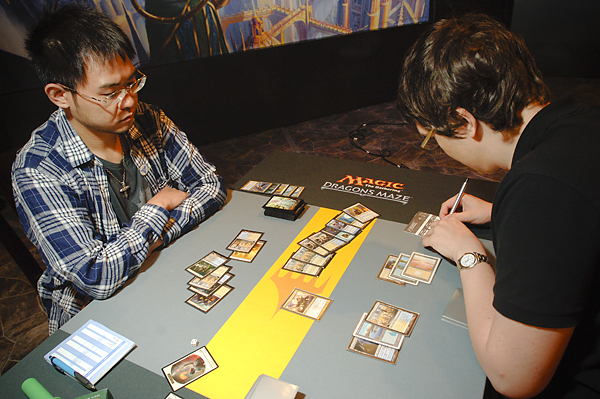 Makihito Mihara bested Matej Zatlkaj in the fifth game, after both players traded blows in the form of great top-decks in the fourth and fifth games.

Regardless of how happy he was, it was clear that he was frustrated when his deck prevented him from playing Magic in the first game of his second Pro Tour Top 8. Land after land flew from the top of his deck into his hand as Mihara steadily built up his own mana base. Eventually, Mihara dropped an Ætherling into play, finding a use for his ever-growing stack of lands. Zatlkaj found a pair of Sphinx's Revelations to use his plethora of lands, but rather than providing him with some solace, they merely stoked his annoyance. Revelations of four and five left him no closer to being in the game than he was before he cast them.

"Both Revelations had only one spell," Zatlkaj said before admitting that Mihara was experiencing similar troubles. The one difference was that he was able to actually productively use his with the Ætherling. After two hits from the Ætherling, Zatlkaj conceded, laying his hand on the table, one land at a time. Once hit hit ten, both he and Mihara shared a nervous laugh. This was certainly not the way he wanted the match to begin.

While mana flood defined the first game, mana screw would decide another. Zatlkaj had fought through Games 2 and 3 with no mana troubles to take a 2-1 lead in the match, but he was derailed once again by his deck's fickleness. Failing to find a fourth land drop, he stumbled for a turn before he was able to land a Jace, Architect of Thought. Unfortunately, he was already facing a Sin Collector and was forced to add a counter to Jace early. After Mihara added a second creature to the table on the following turn, Zatlkaj decided to make a move. He used Jace to draw some cards, but the piles Mihara split put an Azorius Guildgate in one pile and Psychic Strike and Azorius Charm in the other. Zatlkaj sighed as he picked up the pile of spells and returned the land to his deck.

"The Guildgate did nothing for me there," he admitted after the game. "If it had been a land that came into play untapped, I would have taken it since I would be able to cast both Detention Sphere and another removal spell to keep Jace alive."

Instead, he was forced to stay on only four lands and try and make do. Azorius Charm and Devour Flesh combined to offer the hope of Jace surviving the turn. but Mihara had Dispel to stop the Devour Flesh, keeping his Sin Collector alive and attacking Jace. The next turns continued their downward trend, as Zatlkaj continued to be mana deprived. Mihara slowly pulled away, eventually putting Zatlkaj away. 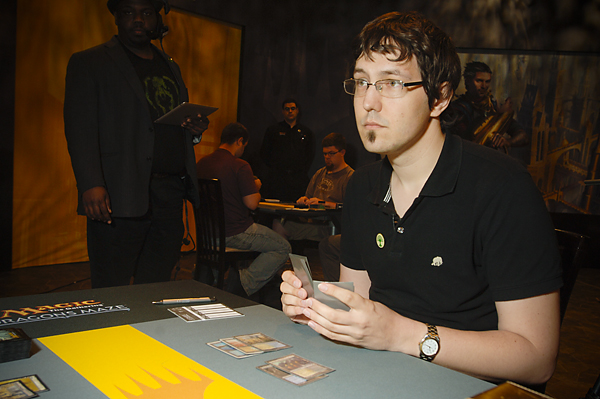 Zatlkaj tried to stay ahead in the first few games, but his deck refused to cough up the right ratio of lands and spells.

Interestingly, Mihara was experiencing mana troubles of his own that allowed the game to continue as long as it did. While Zatlkaj was unable to find a fifth land, Mihara managed to play the overwhelming majority of that game without a second blue source. This kept Ætherling, Sphnix's Revelation, and Jace, Architect of Thought, stranded in his hand until it was too late to matter. The fact that he was able to win the game considering his own significant handicap illustrates how behind Zatlkaj was.

The decks weren't always cruel. In Game 3, Zatlkaj found himself in a stall with Mihara. Mihara had just played a Sin Collector, revealing that Zatlkaj was sitting on absolutely nothing in his hand. Imagine then Mihara's surprise when Zatlkaj drew his card, tapped six mana, and dropped a Sphinx's Revelation onto the table.

"Hah, okay," was all Mihara could say as he watched Zatlkaj fill his hand up. It was the turning point in the game, giving Zatlkaj the Ætherling that he dropped onto the table two turns later, wininng him the game in short order. 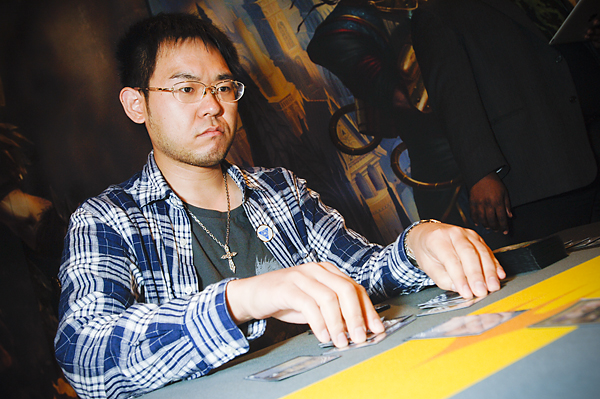 Mihara dropped a game to a fortunate Sphinx's Revelation draw in the fourth game from his opponent, but he returned the favor in the fifth game.

Mihara was the recipient of a bit of fortune himself. In the final game of the match, Mihara was slightly ahead, having just resolved a Jace and drawn a couple cards when Zatlkaj fired off a Reap Intellect for two. Looking into Mihara's six card hand, Zatlkaj was a little dismayed to see that he wasn't able to hit an Ætherling or Sphinx's Revelation with the lobotomizing effect, settling instead for a pair of Sin Collectors and Dispel. After untapping, Mihara smiled as he tapped out to cast a Sphinx's Revelation for three, drawing into absolute business. In addition to finding protection for his Jace, he also found an Obzedat, Ghost Council to seal the game, and the match, two turns later.

"I thought my draw was pretty good in that last game," Zatlkaj told me after the match. "I had a pair of Precinct Captains, which are amazing on the play in this matchup, as well as an Azorius Guildgate, but I didn't have a second white source."

Still, even with the many mana problems that plagued both players, there were some opporunities for great play. As is always present in high level control mirrors, both players took advatage of their Watery Graves and Hallowed Fountains to posture, often taking two damage to put them into play untapped with no actual use for the mana in hand. Zatlkaj was able to correctly put Mihara on a counterspell and removal spell in his two card hand at one point, showing great discipline in waiting another turn before casting an Ætherling with mana for both Dispel and protection available.

In the end, this matchup comes down to the tiniest of edges, and things happened to fall well for Mihara in this match. He played incredibly well, gave nothing away, and was rewarded for this with a victory over Matej Zatlkaj and a trip to the Semifinals.

Mihara kept his Blood Barons in the deck after Game 1, an unorthodox sideboard strategy. This strategy gave him a heavier threat density than Zatlkaj expected, forcing him to alter his sideboarding strategy, brining in additional creature removal at the expense of permission.

While this matchup usually comes down to landing the first Ætherling or Jace, this time around, the player who played a turn-two Precinct Captain went on to win the game. This happened in four games, including Game 5, where Mihara won on the draw.