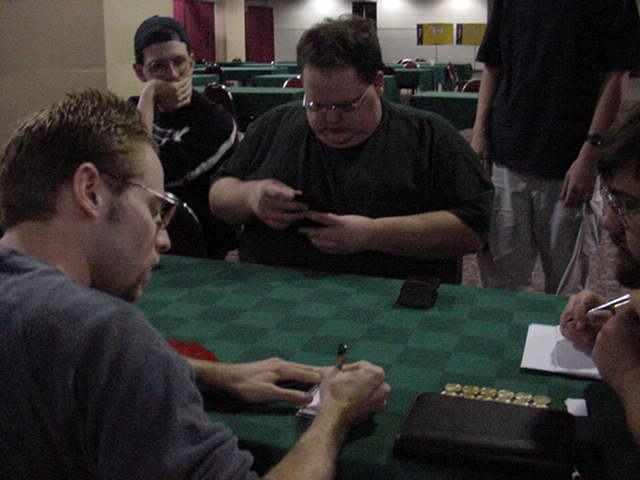 Andrew won the roll and chose to play first. He wasted no time tossing his hand away and going to six cards. Wolf's six-card hand had only two Islands, and with Prophetic Bolt and other multi-colored spells in his hand, he opts to try five. His five-card hand has Battlefield Forge, Mountain and Coastal Tower for lands with Skizzik and Meddling Mage. "That's a good five-card hand," Wolf said, and started the spells with a turn-two Meddling Mage naming "Blurred Mongoose."

Curtis is playing a G/R/u deck with Skyfolk, Blurred Mongoose, and other fast, efficient creatures modified from the earlier season "Liquid Tempo" deck that was only green and blue. Andrew Wolf is playing a R/W/U aggressive deck with bears of its own along with Lightning Angel and Skizzik.

Wolf makes his fifth land drop on time, but sits with only one card in hand. Meddling Mage meets a Fire, and last turn's cast, Galina's Knight gets in for two. Curtis passes the turn, opting to leave his Bobcat home forcing Wolf to leave his pro-red Knight back the following turn. 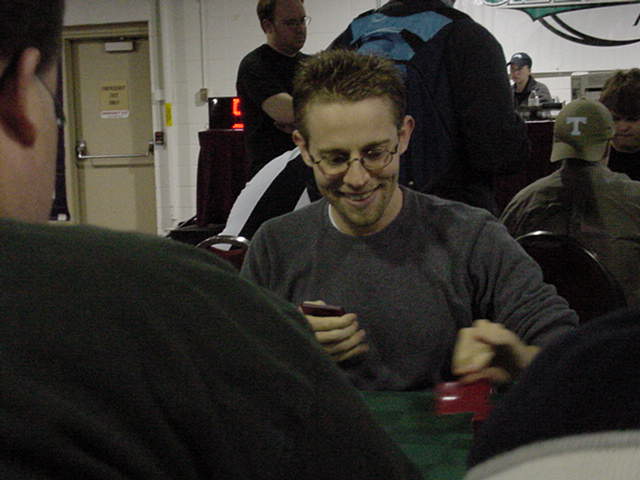 Curtis as missed several land drops, and the players just draw and say go for several turns, neither wanting to open himself up to the other's tempo cards. Curtis breaks the silence, casting a Mystic Snake at the end of Wolf's turn with no spell on the stack. Wolf makes short work of the Snake, Raging it during combat. Curtis finally attacks with the Bobcat, and casts a Skyfolk and a Blurred Mongoose with his four land. Wolf is poised to make a move, and does with a Flametongue Kavu killing the flying Elf. Wolf now has an FTK and a Galina's Knight to Curtis' Mongoose and Bobcat. In the next turn they trade all of their guys, and Lee Curtis ends up with a 2/1 black creature and summons another Bobcat.

Wolf has three cards, all beefy creatures and chooses the Lightning Angel because it doesn't tap to attack. Curtis swings in with both of the 2/1s and Wolf blocks the token which Curtis finishes off with an Urza's Rage. Curtis has a handful of defense with three of his four cards being Rushing River and a pair of Mystic Snakes. Wolf shows more offense, casting a Skizzik and attacking Curtis to 6. Skizzik comes through again, and after blocking with two 2/1s, Wolf assigns three to his opponent and finishes with a Rage to the dome.

This match being an offensive slugfest, Curtis chooses to play, hoping to get the jump on Andrew Wolf with an early Skyfolk or Mongoose. Both players appear to have slow draws this game, but Wolf has a potent card in this matchup; Lashknife Barrier. Curtis draws a Blurred Mongoose and puts it into play on turn two and it hits for two and Wolf's own guy, Galina's Knight decides not to get involved. Wolf drops the turn-three Lashknife Barrier, with a "Lashknife Barrier be good," from Andrew Wolf. 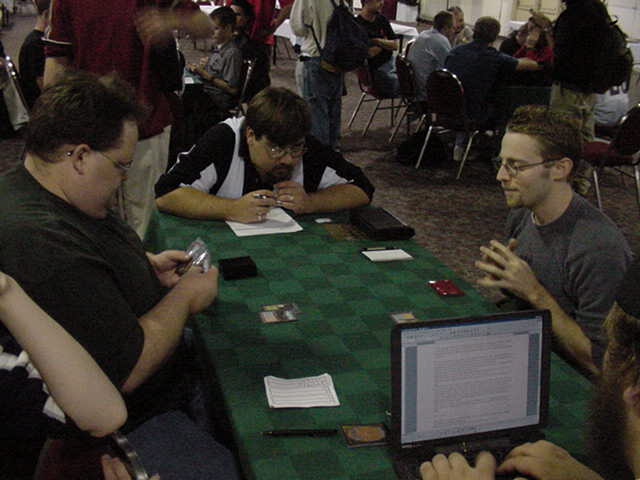 After turn five, the board has Curtis with a Mongoose and Bobcat with Wolf a Galina's Knight and Lashknife Barrier after a Lightning Angel from Wolf was countered by Curtis' Gainsay.

Curtis looks to go on the offensive with a kicked Kavu Titan, but Wolf has a Jilt ready, killing the Bobcat, leaving a black shadow of itself in place. On Wolf's turn he makes the most of his tempo and kicks a Skizzik to which Lee Curtis replies, "At least I qualified for Pro Tour!" getting laughs from the crowd. "This deck is bad," continued Curtis, "I prefer counterspells." Wolf is openly pleased with the way the match is going in his favor, as he should...he's holding a Ghitu Fire with his opponent at six. Wolf takes his turn, double-checks life totals, and tips his Fire.

Andrew Wolf moves on to the semi-finals of GP-Minneapolis facing Brian Davis playing Adrian Sullivan's Domain deck. Wolf likes his chances in this match seeing Sullivan's deck as too slow with Brian Davis forced to hurry his threats on to the table. Discussing this with Adrian, Sullivan says that while Wolf can Urza's Rage the Sunscape Familiar, it is imperative that he has to, making the Wall itself a threat to Wolf's beatdown strategy. "Andy Wolf has no maindeck answer to Collective Restraint, and should Brian [Davis] find one, [Andrew Wolf} is screwed. The only way Brian Davis can lose the first game is mana-screw or mana-flood."

The Davis and Wolf corners feel differently about the way this matchup will go, but one thing is for sure; these guys are both very capable with the decks they have in their hands and this should be an excellent match to watch and see who's predictions are right.