Though neither Japan’s Shinatro Ishimura or Belgium’s Vincent Lemoine have seen the Top 8 lights of a Pro Tour before, that doesn’t mean they don’t know what they’re doing. Ishimura finished in the Top 8 at Grand Prix Hamamatsu, and had an impressive showing at the 2010 Magic Online World Championships under the nom de plume rizer. Lemoine is no slouch himself. He was part of the 2004 Belgian National Team, who made it all the way to the finals, just like he did at Grand Prix Athens, and is a Belgian national champion. 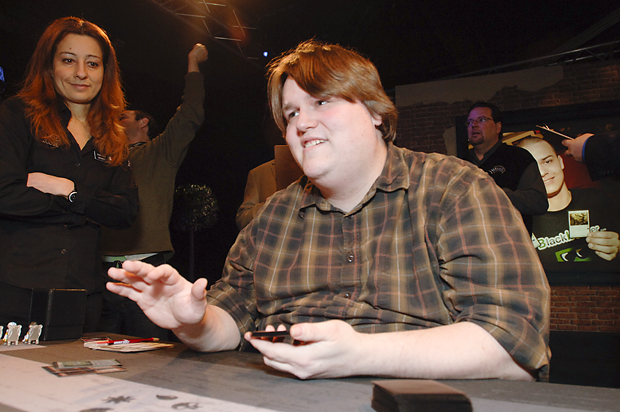 Lemoine comes to the match in the first seed, and feels confident his main deck has a favorable Game 1, especially with the important half-turn lead. “But I still have to get two more after that,” he told me—and Ishimura’s sideboard has some great tricks to swing the advantage in his favor for the later games. Ratchet Bombs and Baneslayer Angels could quickly end the Boros-fueled assault.

Lemoine had a solid opener. Goblin Guide, Squadron Hawk, Journey to Nowhere, and Stoneforge Mystic were all nice cards. Ishimura was sitting pretty on three Mana Leaks, an Oust and a Preordain, but going second was a severe disadvantage to such a hand. If he could last the initial onslaught, he would be sitting pretty into the midgame, but could he even get that far?

Lemoine led with his Goblin Guide, revealing a Preordain, and sunk his opponent to 18. Ishimura answered with a tapped Glacial Fortress, as the next Guide reveal showed a Sword of Feast and Famine. Ishimura passed his next turn with Mana Leak mana up.

Ishimura went to 13 on the attack step and countered Lemoine’s second Squadron Hawk. the Belgian laid a land and passed. Ishimura’s Preordain revealed Journey to Nowhere and Glacial Fortress, both of which were too slow to help. Ishimura drew blind off the top and thought about the state of the board and the all-but-useless counterspells in his hand.

“I concede this game,” Ishimura said, and we were on to Game 2.

“This game, I play first,” Ishimura chuckled as he swept up his cards.

Shintaro kept a hand with Baneslayer Angel, Ratchet Bomb and Jace, the Mind Sculptor—quite a different tone than his previous hand. However, he still had to face down the threat of a turn-one Goblin Guide. The red rascal netted him a land this time in the form of Scalding Tarn. He silently cast his Bomby artifact and dropped to 16 on Vincent’s next attack, while the Goblin showed everyone a Mana Leak.

The Belgian mirrored his first game (albeit a half-turn slower) with a turn-two Squadron Hawk searching up two more buddies. Counter number one on the Bomb and Celestial Colonnade number two for the Japan native, who groaned when the Goblin Guide revealed another Mana Leak as he went down to 11 (with the help of a Teetering Peaks).

The first counterspell did its job, stopping the second Squadron Hawk, but Ishimura really had to think how to worm of his opponent’s fast opening. He left the Ratchet Bomb at one counter, untapped, and cast Jace, the Mind Sculptor, whose +2 ability sent a land to the bottom of his library. 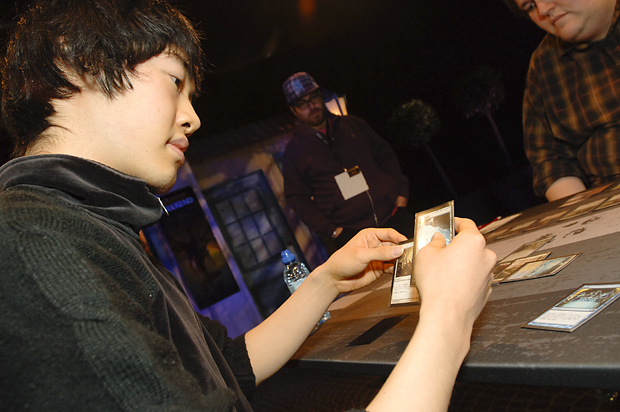 Thanks to Squadron Hawk, Lemoine had a hand brimming with cards and considered the best way to use his free turn. He simply attacked his creatures right past Jace and brought Ishimura down to single digits.

The score was 17-8 thanks to fetch lands, and Lemoine cast a Mirran Crusader. Its protection abilities wouldn’t be relevant, but its mana cost of three, different than either of his other two creatures, would. However, Ishimura bounced the Crusader with Jace and tapped out for a big, beefy Baneslayer Angel. Lemoine could only respond with a Steppe Lynx and a Sword of Body and Mind, and allowed Ishimura to untap with an Angel, a Bomb with two counters, and a Jace at four loyalty.

Ishimura Brainstormed and swung with the Baneslayer Angel. Ouch. And after the attack, he cast another one. Double ouch. Especially considering Ishimura only had two in his deck at all. Lemoine responded by equipping the Lynx with the Sword, dropping a Terramorphic Expanse, and taking Ishimura back down to 7. 12-7 were the totals, but two large, flying, lifelinking Angels were threatening, and Jace was still working his magic. A second Squadron Hawk blocker came down, but Ishimura knew better. He simply sacrificed his Ratchet Bomb to take out the Hawks and Lemoine conceded.

Lemoine was back on the play and cast a Steppe Lynx that was promptly Ousted. With no follow-up on turn two, he put down a Scalding Tarn and passed the turn back. Ratchet Bomb was right on time for Ishimura, and the Belgian replayed his Steppe Lynx and called in a Squadron of Hawks. The Bomb ticked up and a Mirran Crusader came down for Ishimura.

The first combat damage of the game sank Shintaro to 17, as one of the endless fetch lands from Vincent threatened to take down the Crusader if it blocked the Lynx. A buddy Hawk was cast after combat, and after a draw-go we were back into a red-white attack step, two lands were sacrificed and the life totals made 17-9, in favor of the Belgian.

The Bomb sat at two, looming. The Crusader double-struck Lemoine down to 13. Student of Warfare came down, and promptly turned into a 3/3. Lemoine untapped and Lightning Bolted the Student off its horse and took Ishimura to 5. It was getting close to the end. It was palpable. But the Ratchet Bomb still lingered, and the Mirran Crusader was doing a great job of keep Lemoine honest. It was 9-5. 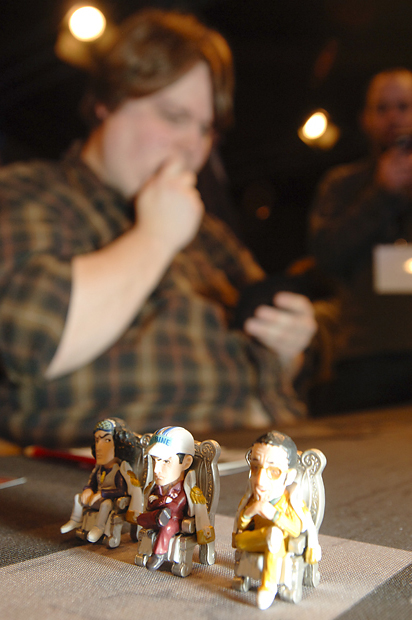 Both players still had cards in their hands when Ishimura blew up his Bomb main phase, then went back up to six cards with the aid of a three-card-drawing Squadron Hawk. Two more Hawks were cast before Ishimura passed his productive turn back to Lemoine who had six lands and a lonely Steppe Lynx.

Arc Trail from Lemoine took out the double-striker and the original Hawk, and his final Hawks came down evening up the board at two Hawks a piece, with the Belgian’s Lynx being the odd cat out. Celestial Colonnade finally had the mana to safely animate, and Ishimura leveled the life totals at 5, before dropping himself to 4 with an Arid Mesa and casting the final Hawk of the game with help from the 4/4 vigilant land. That’s three Hawks to two.

Sword of Body and Mind equipped to a flyer, but that was all Lemoine wanted to do with his turn. Ishimura agree that Swords were good for Hawks, so he cast a Stoneforge Mystic and searched up one of his own—this one of Feast and Famine. The Sworded Hawks traded, and the Lynx picked up the Sword, getting in to avenge his fallen Hawk friend. Ishimura sacrificed his Mystic to the vengeful cat. A Plated Geopede joined the fray and Lemoine played Journey to Nowhere to take out a Hawk, rather than using that two mana to equip the Sword to an untapped Bird. Lemoine was waiting for a land to make his Lynx (and now the Geopede) a more potent threat.

Left with only a Hawk, a Sword and a land that could animate, Ishimura pondered how to deal the last five damage before Lemoine could deal his four. The Hawk suited up, took down Lemoine’s last flyer and a Student of Warfare, who’d been observing from Ishimura’s hand, learned from the battle and leveled up twice to become 3/3 with a Ratchet Bomb following closely behind.

But it was for naught. Steppe Lynx finally found a fetch land to play with, like a ball of +4/+4-granting yarn, and there were too many threats for Ishimura to overcome.

When both players mulliganed, Lemoine said, “Like gentlemen. It’s better when we both mulligan in the same game.”

They both kept their sixes and were off to the races. Ishimura led with a Ratchet Bomb to blunt Lemoine’s Steppe Lynx and Squadron Hawk.

While searching for Hawk buddies, Lemoine said, “It’s like I never mulliganed.” Ishimura ratcheted up to one counter and cast a Sword of Feast and Famine. Next turn, he laid a naked Jace, the Mind Sculptor up against two Squadron Hawks and Steppe Lynx, but the planeswalkers +2-enhanced five loyalty would probably be enough. 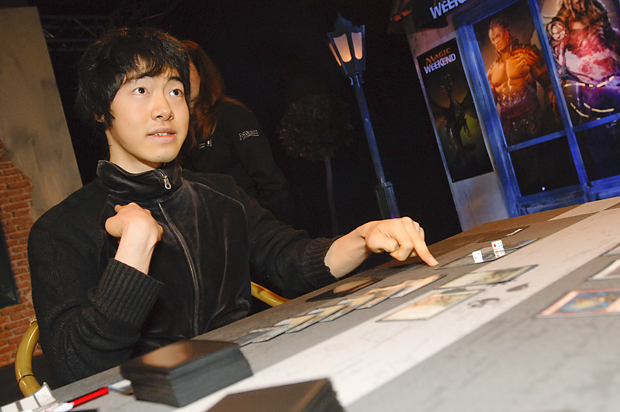 “Hmmphh,” Ishimura said as Lemoine laid yet another fetch land. Come on, Shintaro, the man has fourteen fetch lands! He tried to convince Lemoine to attack Jace but to no avail. The eighth seed went to 7, as a post combat Goblin Guide came down. The Ratchet Bomb went to two, Jace bounced the Lynx, and Ishimura confidently tapped out to lay the Baneslayer Angel.

Stoneforge Mystic searched up the Sword of Body and Mind, and another hasty Goblin entered the battlefield, uneager to attack for Lemoine. Ishimura drew an Oust off Preordain (while bottoming the land), then used Jace to dig further into his deck. Ishimura sat up, and continued what would be the most productive turn of the match: Baneslayer got a Sword, Ratchet Bomb took out the blockers and the Stoneforge Mystic, Tectonic Edge took out a Teetering Peaks, a Goblin was Ousted, and when Ishimura passed back his turn, with the life totals now 15-14, it looked like an entirely different game.

Goblin Guide valiantly took Ishimura back down to 12, and was joined by a Lynx and a Hawk. But Jace bounced the Hawk, Celestial Colonnade marched with the Angel into the red zone, and Lemoine sunk to 3 and then 0.

And that brings us to the last game. The first four have all been tense and evenly matched. Baneslayers and Ratchet Bombs have done their jobs, turning very difficult board states into wins. But Lemoine’s unforgiving, unending number of fetch lands have constantly kept Ishimura on the back foot. A match that looked a little lopsided on paper has turned into an incredible post-sideboard showdown.

And then it all went sour.

Ishimura kept a great-looking hand on the draw with only one problem—there was only one land. It was filled with early creatures to change the pace of the game, but he would need the mana to cast them. Lemoine’s unremarkable hand played turn-two Plated Geopede that was Ousted. Then for the first time in the match, Ishimura struck the opening salvo, leading with two of the same creature, Student of Warfare, and hitting for 1 damage. But he still didn’t find land number two. 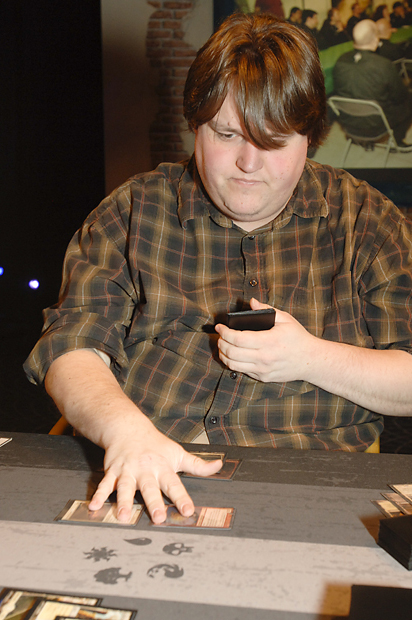 Ishimura groaned as he drew for his fourth turn. The recast Geopede, and together with Teetering Peaks, took Ishimura to 15. The next turn a Mark of Mutiny took the larger of the Students and made the totals 19-6. Broken combo, folks: Plated Geopede + fetch lands—blockers.

Ishimura finally found his second land on turn five. He had a 4/4 and a 1/1 Student of Warfare, and when Geopede took a Journey to Nowhere, Lemoine’s board was left only with land. However, he had the spells to finish the job anyway. After his end-of-turn Lightning Bolt, Lemoine untapped and played a second Mark of Mutiny, ended this very intense match-up.

Vincent Lemoine defeats Shintaro Ishimura 3-2 and advances to the semifinals!