Lenny and Dan are two of the Old-school icons of Sydney and Australian Magic. Both players made top 8 in the first ever Australian Grand Prix in Melbourne in 1998. Lenny also represented Australia at Worlds in the 1990s and made the finals of GP Brisbane in 2001. Dan has been one of the most consistent players on the local scene, regularly featuring in the top-16 players at Australian National Championships. 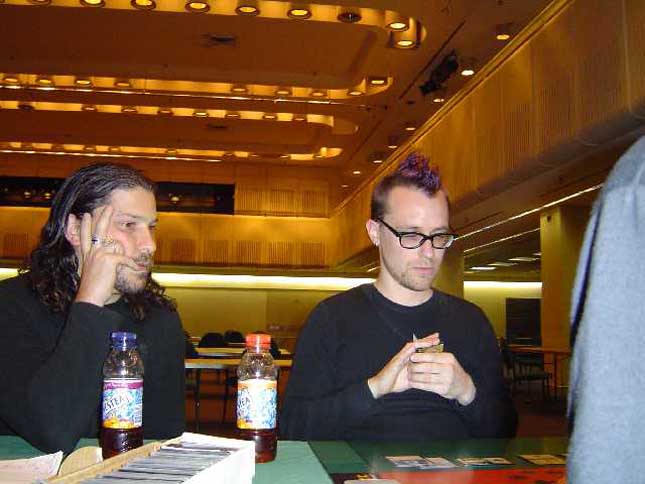 Lenny is playing a green white deck also with plenty of large creatures and artifact removal, as well as a large number of regenerators and creatures with protection from artifacts.

When asked whether they were happy with the draft, both players were a little circumspect. Dan blamed some parochial hate drafting on the part of others at the table from denying him some of the more powerful cards he would have liked. Lenny was unusually quiet.

After a few minutes wait for Lenny to sleeve his deck, Dan won the toss and elected to play. After pausing for some time deciding whether to mulligan, Lenny remarked "I've got a pretty good hand, Dan". Eventually Dan parised the first seven away and drew six. He parised a second hand of 6 land, but noted that the 5-card hand "looked good" and led with a forest.

The first action of the game was a second turn Tel-Jilad Chosen by Lenny. Dan played a 3rd turn battle gear and took the beats from the Chosen, whilst summoning an Omega Myr. Dan dropped some more equipment but no men and Lenny swung for 3 and dropped a Tel Jalid Exile.

After dropping another land before saying done, things were looking particularly grim for Dan, particularly as Lenny summoned another Exile, cast a Bonesplitter and swung for another 5.

Dan finally got a man down with a turn 6 Goblin Dirigible, but it was unable to stop Lenny's horde of 4 creatures, backed up with Predator Strike.

Lenny wins game one, a 10 minute affair in which shuffling and mulligans took longer than the game itself.

Dan elected to play and kept his hand. Lenny was decidedly happy with his hand and let everyone know about it. 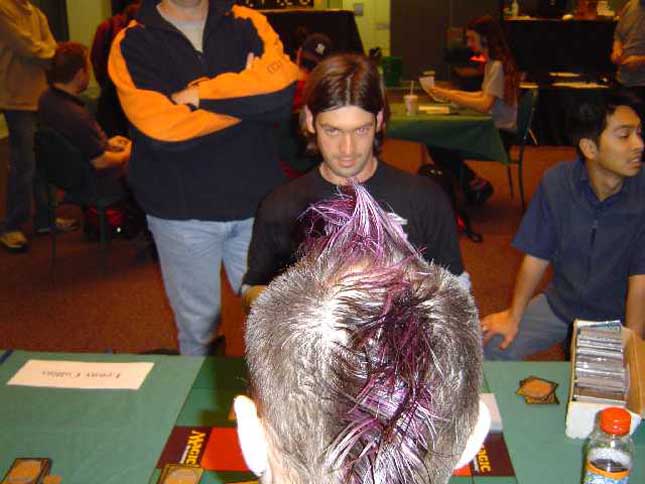 Dan led with an artifact land, Lenny with a plains and a Boneplitter. Dan's second turn Silver Myr was the sole body on the table after turn 2 and on turn 3, Dan equipped it with a newly cast Memory Mask and attacked for 1, drawing 2 cards and discarding an island.

On turn 3, Lenny hoped to steady the ship with a Yotian Soldier. Dan responded by dusting off the Bonesplitter and dropping a Myr Enforcer. Lenny arrested the Myr and swung for 1 damage.

The next turn Dan, Deconstructed the soldier, cast another Enforcer, attacked with his equipped Silver Myr and moved the Mask onto the free Enforcer.

Lenny played a Soldier Replica and passed priority. Dan responded with a Wizard Replica and masked it up, holding back with the Enforcer.

The wizard was taken down by the soldier, but was followed up with a Vulshok Battlegear and a Gold Myr.

Lenny stablised again with a Tel-Jilad Exile, and then a Dragon Blood, but Dan responded with a Fangren Hunter, which was equipped up.

Lenny used a Predator Strike to hold off the doubly equipped Hunter and looked as though he may again stabilize when Dan cast a Slagwurm.

Lenny was looking more and more landsome as he continued to rip land from his library and couldn't hold off the army of equipped myrs and 8/8 monsters.

Both players exchange classic Magic pleasantries about mana problems while Dan sides out a Brown Ouphe and an Alpha Myr for a turn to dust and a Lumengrid Warden.

Lenny elects to draw and both players keep their hands.

Both players start with equipment, lenny with the 'Splitter and Dan with the Greaves, but Lenny has the artifact Squire and starts the beats with a 'Split up Omega Myr. Dan turns the 'Splitter to dust and Lenny makes a Tel-Jilad Chosen. 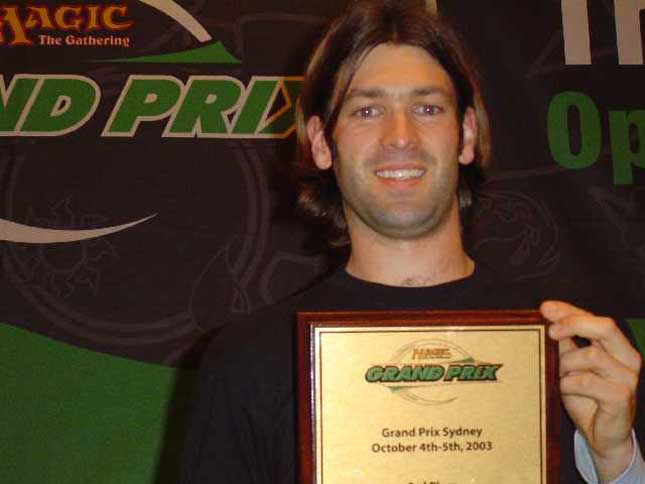 Lenny continued to attack and drop more creatures including an Exile and Yotian "the wannabe Serra" Soldier, whilst Dan was only able to respond with land.

Dan eventually cast a dirigible and a Duplicant removing Lenny's Exile, but the early damage combined with the unblockability of Lenny's Tel-Jilad Chosen proved too difficult for Dan to deal with as he continued to draw artifact creatures.

When Dan, needing to peel a coloured creature topdecked a mask, his face said it all. He vainly masked up the dirigible in the hope of drawing something useful, but when he didn't the long awaited scoop was quickly pre-empted by Lenny.