Utter-Leyton and his aggressive red creatures raced ahead in the first two games, where Shrout failed to produce Supreme Verdict quickly enough. "Supreme Verdict is the most important card in this matchup," Utter-Leyton said. "Most games are Verdict or bust."

Utter-Leyton lost the third game, where the destruction of his creatures from multiple copies was too much to recover from. "It's all about mitigating how much damage it's going to do to you," Utter-Leyton explained. "But if you play around it too much they'll punish you with their long game. Jace, Architect of Thought in particular will punish you the most." 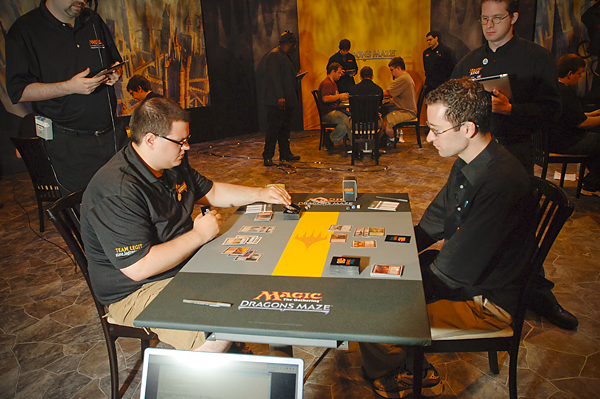 Andrew Shrout was rushed out by Josh Utter-Leyton's brutal Boros Blitz deck in the Quarterfinals.

It's possible to fight Supreme Verdict and Jace, Architect of Thought though. "Legion's Initiative and Boros Charm counteract both. Both Charm and Initiative counteract Supreme Verdict, and Initiative in particular counters Jace's ability to give creatures -1/-0. Boros Charm counters Jace also: If you leave up Charm mana they can play Jace and you can nudge it off the table with Charm's damage." Utter-Leyton explained.

The fourth and final game is where a Boros Charm from the top of the deck finished things up for him, but it was Utter-Leyton's approach to sideboarding that worked out. "I wasn't entirely sure what the mix of Legion Loyalists and Battlefield Medics should be. Loyalist is pretty bad in the matchup, but it's another one-drop and turns on battalion. Frontline Medic normally comes out against Sphinx's Revelation decks. You don't want that many three-drops, but against Shrout I went to wanting all of the Medics on the draw. All of his burn spells are just 2 damage, and he's leaning pretty hard on Revelation. Medic was particularly good against his deck."

Shrout was playing in his first Pro Tour Top 8. In fact, this was his first Pro Tour and first time earning Pro Points. While the excitement of winning a Pro Tour is enough for any player, his victory in the event would also net him 2013 Rookie of the Year -- just a little extra icing on the cake.

Utter-Leyton had locked up 2013 Player of the Year with his Top 8 appearance, overtaking season Professional Points leader Yuuya Watanabe. Piloting one of the two aggressive decks of the day, Utter-Leyton felt that "It's a favorable matchup. Not extremely favorable, but definitely in my favor." 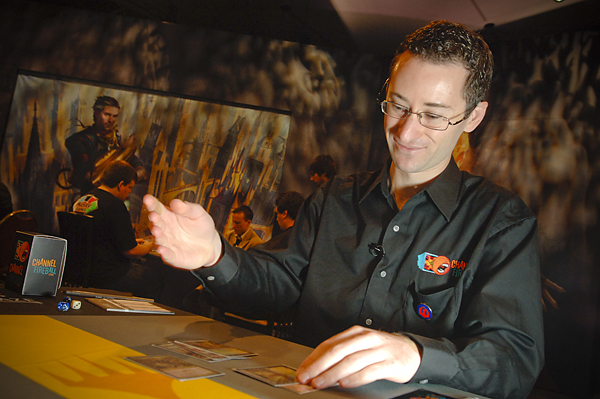 Boros Charm works on multiple levels for Utter-Leyton in this matchup.

The second game was slower. "So you want to high roll to see who goes first in this game?" Utter-Leyton joked, wanted to go first with his deck against the higher-seeded Shrout.

"No," Shrout chuckled back. "Coming into this I was 100% confident that I would be playing first."

Though Utter-Leyton led his second turn with Burning-Tree Emissary into an unleashed Gore-House Chainwalker, Shrout fought back with two copies of Renounce the Guilds and Azorius Charm. Utter-Leyton weilded his own removal from the sideboard for Shrout's Boros Reckoner so that attacks, joined by a Battlefield Medic, dropped Shrout to just 6 life.

Trading Sphinx's Revelation for Battlefield Medic at the end of Utter-Leyton's turn, Shrout began to dig through his library with Jace, Architect of Thought. Taking two lands instead of Supreme Verdict allowed Shrout to use Ætherize and stay alive after Utter-Leyton used Boros Charm's 4 damage effect. Another Ætherize, a from-the-sideboard Mugging, and a Supreme Verdict, gained from trading Jace away for it, weren't enough to stop Utter-Leyton's chain of creatures that followed.

It was the third game where Shrout tried to turn things around. With two copies of Azorius Charm and a Dramatic Rescue, Shrout minimized early damage from Utter-Leyton. After he used Izzet Charm to counter a Boros Charm meant to save against Supreme Verdict, Shrout had stabilized into Sphinx's Revelation for 7. Reloaded with removal and an Ætherling, Shrout quickly closed things out.