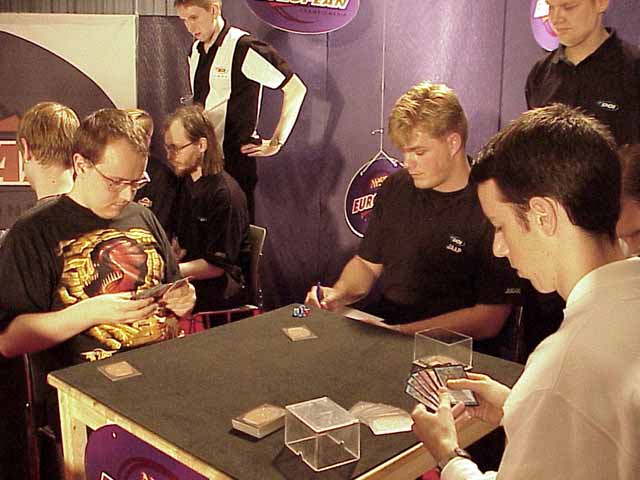 Luic Dobrigna, who was playing Accelerated Blue, began the first game with a hand of five islands, a Rishadan Port, and a Morphling. Keeping such a hand would be suicidal against a Replenish or Bargain combo deck. But Dobrigna knew that Wolfgang Eder was playing Rebels, so he chose not to mulligan.

Things started off well for Eder, who played Mother of Runes, Steadfast Guard, and Longbow Archer. But Eder's attempt to lock up the game with Armageddon was Miscalculated, and with the help of Grim Monolith, Dobrigna played his Morphling.

Despite his bountiful blue mana, Dobrigna had no way to force the Morphling through, since Mother of Runes could give the Archer protection from blue. Eder took advantage of the stalemate by playing Ramosian Sergeant and using the explosive mana production of Gaea's Cradle to build a massive army on his side.

Dobrigna hoped to win with the Morphling before the rebel force got too powerful, and he managed to get a Treachery onto Eder's Longbow Archer. But Eder continued to search flyers out of his deck, and Dobrigna was soon overwhelmed.

Dobrigna got off to a faster start in the second game with Grim Monolith and then a Masticore on turn four. The Masticore would have immediately massacred the small Rebels were it not for the Glorious Anthem that Eder cast on the next turn. The Masticore was still picking away his creatures at a leisurely pace, however, so Eder was forced to Enlightened Tutor for an answer: Serenity.

After letting Masticore die, Dobrigna laid down his next bomb: Morphling. Eder desperately tutored for his Cursed Totem, but it was Thwarted. Then, he cast Armageddon, hoping that this would slow down Dobrigna's attacker. But Eder failed to draw the land he needed, and the 3/3 shapeshifter served for twenty points of damage.

Eder had such a bad experience with the Armageddon in that game that he decided to sideboard all four of them out of his deck. He put in Parallax Wave, Phyrexian Processor, and two Wrath of God.

Dobrigna used Miscalculation and Withdraw to slow Eder down, then played Treachery on a Longbow Archer. Eder had to play around the 2/2 first striker, so he tried casting Parallax Wave and then Glorious Anthem. Unfortunately, both were countered.

Eder used his Mother of Runes on a Steadfast Guard to get past the Archer, slowly whittling Dobrigna's life total down. Dobrigna calmly bided his time until, at eight life, he topdecked a Masticore.

Eder tried to play a Serenity, but it got Thwarted. So he went with his backup plan: Wrath of God. But Dobrigna had a Withdraw in hand. He choose Masticore as the primary target, and the Treacheried Archers as the secondary one. Then, because he was the controller of the Archers, he could pay one mana to keep the Archers out of Eder's hand.

Eder was clearly frustrated at having destroyed all of his own creatures but not the Masticore. He tried to play Phyrexian Processor, but Dobrigna had the Annul. Eder died to combat damage a few turns later.

Eder was clearly undecided about the right sideboard choices for this matchup. Fearing that Treachery would beat him once again, he took out a Crusade in favor of Disenchant. In the fourth game, he started with Ramosian Sergeant and Mother of Runes, but was terrified when Dobrigna used Monolith to cast a third-turn Masticore.

Eder wasn't able to recruit Rebels as fast as the Masticore could chew them up, and his Serenity was Miscalculated. His attempt to cast a Masticore of his own was countered as well. He made a final effort to save himself with Wrath of God, but Dobrigna had a Thwart. The players shook hands to affirm Luic Dobrigna as the 3-1 match winner.