This quarterfinals features the first player to qualify for the Top8 - Stefano Fiore - against the last player to make. Martin Heidemann sneaked in earning the eight spot on tie-breakers. He is playing Red-White, like all the three Germans who made the Top 8. Across the table he will face an Italian that has been on fire the whole weekend. Stefano Fiore's Goblins have yet to cost him a match this weekend. 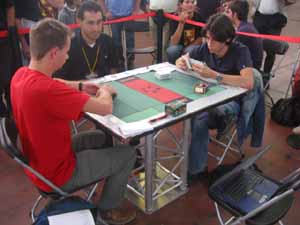 Stefano won the dice roll but his good luck quickly ran out. He took a mulligan and cme out with first turn Prospector. Martin started with second turn Lightning Rift. The Prospector turned into a Clicslither and the hostilities were underway.

A Sledder and a swing later Heidemann was at eleven. A Siege-Gang Commander came out into play and Stefano Fiore decided to call the "Wing Shards" bluff. He sacrificed every single one of his goblins to the insect.

Martin shrugged and collected his cards as the Italian public got loud.

A quick run through the tables revealed Fiore was the only Italian who could smile. The opther three were in, at least, some trouble on the other matches.

This time the best Fiore could do was turn two Goblin Sldedder. Heideman cycled for a Plains but had no Silver Knight to play. Out came Goblin Warchief and Martin Spark Sprayed the Sledder in response. Fiore played a three-mana Goblin Goon but decided not to try his luck on the "Wing Shards" game this time.

The German killed the Warchief and played Sliver Knight. Things looked quiet, but Stefano Fiore hates quiet. Out came Clickslither and both creatures raced into the Red Zone. When a Sledder tried to join the fray Heidemann put his Gempalm Incinerator to good use.

Still the Italian would not slow down. Next came Goblin Piledriver. The German had a high life total but he seemed to be headed into trouble. Thankfully for him a Legend came to the rescue: Akroma.

Unfazed the Italian reached deep: Siege-Gang Commander. He sent Piledriver, Goon and Clickslither in. Akroma blocked Clickslither and the Knight stopped the Goon. the Clickslither ate up everyone, expect the Piledriver. That dropped Martin to five, but left Fiore without a swarm on the table.

Heidemann sent his girl in and played a morph. Calmly Stefano Fiore untapped, showed Carbonize and Shock. When his opponent extended his end he exploded along with the crowd.