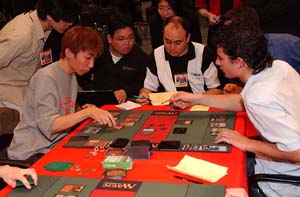 Rookie of the Year leader Masashi Ooiso drafted textbook U/R control in his first Top 8 – but by the looks of his run this tournament and this season so far, one cannot suspect that it won't be his last. His quarterfinal opponent Jose Barbero has more top-level experience under his belt, twice playing on the Argentinean National team, but looks to be the clear underdog in this matchup. His U/B deck is far from what one hopes to draft, and he has only Skinthinner and Smother to deal with Ooiso's pair of Lavamancer's Skills.

Whether due to the language barrier or the tension of the Top 8, both players were silent as they shuffled up for Game 1. Ooiso won the die roll and got things going right away with a Goblin Sledder, which he matched the following turn while Barbero played out a Boneknitter to hold the fort. Ooiso missed his third land drop, often lethal in this format, but played out Aphetto Alchemist, threatening to drop Skill as soon as his next turn. Barbero kept up with a morph, and was visibly relieved when Ooiso dropped only a land and a morph rather than the dreaded red enchantment. Barbero kept pace with Smokespew Invoker, but Ooiso shook things up on his following turn with Embermage Goblin. With the Alchemist in play, the Goblin threatened to mow down Barbero's team in a matter of turns. Barbero could only match with another morph.

Ooiso ripped another land the next turn and sent in Crested Craghorn, provoking Barbero's newest morph, which turned out to be none other than Kai himself. The rookie got his goblin gun started during Barbero's upkeep, pinging Invoker and Boneknitter, which Barbero let die rather than regenerate. The Argentinean had Chain of Vapor to send the goblin back for a turn, which Ooiso bounced to Jose's remaining morph, and Barbero returned the Alchemist as well, trying to keep the pinging engine off the table.

Ooiso went to work rebuilding the following turn, dropping the goblin, while Barbero once again had only a morph. When his next two draws revealed nothing to deal with the Alchemist as it came back down and started slaughtering his creatures once again, Barbero decided he'd try his luck in Game 2.

If Game 1 was frustrating for Barbero, Game 2 was downright demoralizing. Once again Ooiso opened with Sledder and Alchemist, and once again Barbero dropped a morph. This time, however, it was not Embermage Goblin that combo'd with the Alchemist, but rather Lavamancer's Skill. Ooiso offed the morph and Barbero could do nothing but look dejectedly at a hand of two toughness creatures and pass the turn. 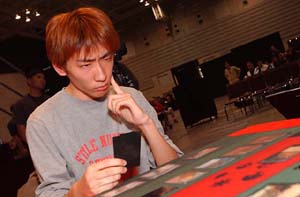 He cycled a pair of Choking Tethers looking for an answer as Ooiso put him on a clock by adding a morph to the table. That clock quickened when the morph turned out to be Ascending Aven. Barbero finally found a Smother to kill the Alchemist when the Aven was turned face up, but when Ooiso added Covert Operative to the board, Barbero realized he was too far behind and scooped up his cards.

With his back against the wall, Barbero couldn't have been happy to see a hand with only one land staring back at him. He sent it back. His six were unexciting, but it was hard for him to expect better out of his deck, what with having a Fugitive Wizard in it and all. He started with a Goblin Lookout, which traded with Ooiso's Aphetto Alchemist. Morphs came down on both sides as they are wont to do in this format. The mystery men swung by one another while Ooiso added a second along with a Sledder while all Barbero could do is stare at a hand full of lands and say go.

Things changed when the Argentinean ripped Corpse Harvester on his fifth turn. The zombie-fetching machine came down without delay. Ooiso's team was not to be outdone as they flipped over to reveal Ascending Aven and Mistform Seaswift. The fliers crunched for six, sending Barbero to twelve. Jose sent his morph and sent another, trying to close the life gap by putting Ooiso at sixteen. The rookie leader added a Crested Craghorn to the board and sent his squad. Barbero – rather than letting provoke resolve and sacrificing one of his morphs so his Harvester couldn't block – let the beast take down his zombie, but sacrificed itself with damage on the stack to fetch Aphetto Vulture.

The Vulture came down t he next turn, stabilizing the air with the Argentinean at a precarious six life. Those six life points were enough, however, as Ooiso was out of gas. A Skinthinner off the top took out the Mistform Seaswift, and a Smother on the Sledder and an alpha strike later, Ooiso was the one scooping up his cards 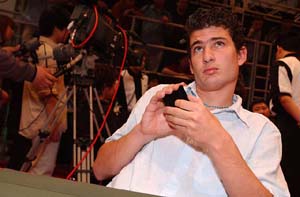 Ooiso got to play first once more and quickly kept his hand. Barbero was much more hesitant, mulling for a long time over seven cards with three Islands, but no Swamps for land. In the end he kept, and quickly found himself facing down a Sledder and a face up Riptide Biologist – a play that always smells of Lavamancer's Skill. Barbero matched with a Biologist of his own, and Ooiso started to put real poundage on the board with a morph. Barbero was still without a Swamp and cycled a Choking Tethers in his main phase, but none was there – he passed the turn with three Islands and his wizard. Ooiso didn't have skill, but he did have Embermage Goblin, which upped the clock that his morph and Sledder backed Biologist put Barbero on.

Barbero ripped swamp and played Nameless One – a 3/3 monster with the wizards in play, since his Riptide Biologist fell in combat to remove the Goblin Sledder. The Argentinean's glimpse of hope was short lived, however, as Ooiso flipped up Shaleskin Plower to take out his lone Swamp. He drew another, but not before Ascending Aven was pounding away while Embermage Goblin took nips at his life total. Wretched Anurid was not the creature Barbero needed to stay in the game. Ooiso dropped a second Sledder and attacked for what he thought to be lethal damage, but the players and the table judge had some confusion over the life totals. After consultation with both a translator and the head judge, it was ruled that Barbero was at two life rather than zero. The difference hardly mattered – Barbero's hand was all creatures, none of which could kill the Embermage Goblin, stop the Ascending Aven, or circumvent the Wretched Anurid life loss – let alone do all at once.

Barbero dropped Arcanis so he could at least die in style.