Nothing like starting the Top 8 out with a grudge match. At the Venice Masters, Masashiro Kuroda's team P.S.2 blasted the previous Japanese Team Limited powerhouse Panzer Hunters out of the water. That just happens to be Kazuyuki Momose's crew. Since the close of the Masters he's been looking to singles competition again, and clearly he's back. Now he gets a chance for payback. 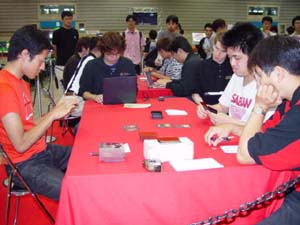 Momose's deck might raise some eyebrows for its maindeck Kilnmouth Dragons, but it seems like all the red-white decks are boarding them in as a damage source that won't fall to Wing Shards, so he might just be one step ahead of the metagame. Kuroda's is a more standard version. Kuroda was his usual reticent self when discussing his chances in the match. Though he did admit that when they tangled during the swiss he emerged the victor.

Momose pulled up a strong grip including Silver Knight and the all-important Lightning Rift, and naturally kept. Kuroda's hand was no slouch either. He cycled a Dragon in response to the Rift hitting the table, and then used Wing Shards to rid himself of the Silver Knight. Then he played a Rift of his own, and things were looking up.

Not so for Momose, who'd failed to find land number five and was sitting on a hand of expensive spells. Kuroda punished him with a fifth-turn face-up Angel thanks to Temple of the False God. Momose needed to rip.

He did. Temple of the False God off the top let him reset the board with Akroma's Vengeance. Kuroda regrew his Dragon and played a replacement Rift. Momose untapped and made three soldiers with a cycled Decree of Justice. It gave him the second mountain he needed for the two Kilnmouth Dragons in his hand. Kuroda had a turn with him tapped out. All he could manage was an Eternal Dragon.

Down came Momose's 8/8. Kuroda swung in for five and gave it back to him. Momose swung back, but Kuroda had the Starstorm and Wing Shards to wipe out his team. Momose sighed. He played an unamplified Dragon and gave it back. Kuroda cycled, then ran them into each other. Momose, with his back against the wall, cycled Decree of Annihilation. He was holding two lands and a Silver Knight. 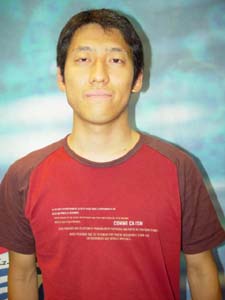 He hit five lands in play before Kuroda found three, and fetched a sixth with Eternal Dragon. With a Temple in play that made seven mana for the second Eternal Dragon in his hand. Kuroda couldn't scoop fast enough.

In Game 2 it was Kuroda's turn to lead with Silver Knight. Momose made a Rift, but his hand was short on threats. He held Wing Shards, Akroma and Oblation, along with some lands. Kuroda beat and added an Astral Slide. On Kuroda's fourth turn he still had only plains for land. He hit again. Momose cycled to Shock him.

A Temple of the False God let Kuroda have a fifth-turn Angel, but Momose had a Temple and a Vengeance in hand, so he gained no ground. He tried replacing it with Eternal Dragon, but that fell to Wing Shards. He did manage to cycle into some red mana, but had no offense.

Meanwhile Momose sent out his Eternal Dragon to get the mana he needed for Akroma, Angel of Wrath. He chose not to cast it, waiting instead to get some men from a cycled Decree of Justice. Kuroda tried to seize the moment by playing an Akroma of his own, but Momose had Oblation ready. He made two men at end of turn and then bashed in for eight thanks to his mighty legend. Kuroda fell to ten.

He untapped and Vengeanced the board. Momose chose not to bring back his Dragon, the better to have mana open for a bluff, playing a Rift instead. Kuroda picked up his and handed it back. Two cyclers forced him to Oblate the Rift as he fell to six. Momose, now holding a pair of Akroma's Vengeances, still held back on his Dragon. He drew a Kilnmouth, and paused. He cycled one of his Vengeances and drew another Wipe Clean. That too got traded in. Still no soup.

Momose was still at a comfortable thirteen. Kuroda's hand was full of men. Two Eternal Dragons, a Kilnmouth and an Exalted Angel, along with a Starstorm. He thought hard. He eventually chose to morph his Angel. Momose untapped and Vengeanced it away. Kuroda cycled in response, finding Oblation to shuffle it back in.

He untapped and played a morphed Angel, as well as a twice-amplified Kilnmouth. Momose cycled. On his turn he had Decree of Justice, Kilnmouth Dragon and Eternal Dragon in hand. He made an 8/8, and hoped it would be enough. Kuroda's morph swung in and Momose had to block. That let Kuroda flip it up, gain four life, and shoot down the Kilnmouth. He gave it back to Momose.

Momose wasn't out. He tapped out, twelve mana in all, and played Decree of Justice for four angels. Kuroda calmly cycled an Eternal Dragon, untapped, and played his own Decree, also for four angels. Momose couldn't believe it. He made another 8/8 and a Rift, and took six from Kuroda's Kilnmouth. He had a very suspicious three mana open. Kuroda just played an Eternal Dragon and waited. Momose cycled him down to eight, with just one card left in hand.

He did some math on his upkeep, trying to decide if he should pick up his Dragon. He did, but failed to draw a cycler, and was just short of the win. Kuroda foomed to victory.

Playing first, Momose's opener was Wing Shards, Angel, two Eternal Dragons, Wipe Clean and Kilnmouth Dragon, but only a single plains for land. He looked like he was seriously considering running it. Two minutes of deep thought later, he kept. Kuroda's hand at least had four land to go with its pair of Kilnmouths. Momose drew his card for turn two very slowly, and when it was a Lightning Rift he could only laugh. His next draw was a land, though, so he was able to get his morphed Angel into play on turn four. He swung in for two. Kuroda made no move. Momose let it stand. 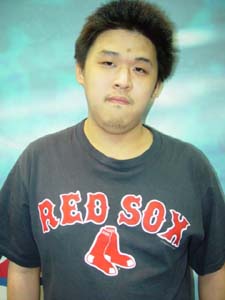 He considered adding another morph to his squad, but decided to save his mana for cycling the other Dragon. The hits kept coming, with a Temple to let him play a second Angel right away. Kuroda calmed that noise with an 8/8 Kilnmouth. Momose played for the long haul, picking up one of his Eternal Dragons. He still didn't have a second red, for a Kilnmouth of his own.

Kuroda bashed in after some thought, taking down the Angel. Momose ripped the second mountain like a pro, but now had to consider the Akroma option in his hand. Kuroda had seven mana open. He tapped eight and put her into play, then considered his options. He did not attack. Now it was Kuroda's turn to think. He did nothing.

Momose picked up his Dragon and played a Rift, leaving just one mana open. Kuroda responded with a cycled Decree of Justice for six men. Momose passed the turn and took three from the Kilnmouth. Kuroda tapped three for Oblation and pointed at Akroma, then showed Decree of Annihilation in a trembling hand. Momose could only nod at a very good beat.