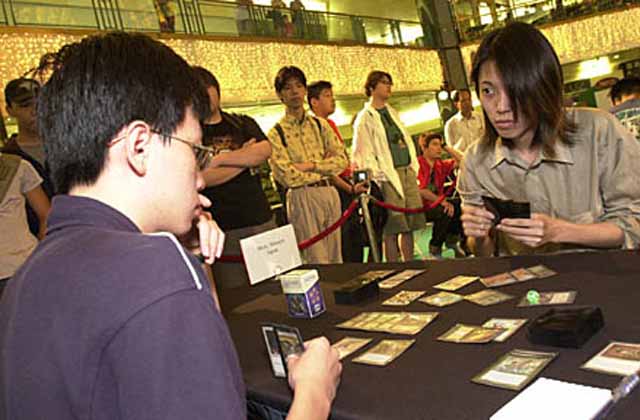 Masaya Mori sat down across from Doctor Wong Sunday morning for perhaps the most interesting APAC quarter-final. Mori won this event last year and is trying to repeat by using Aaron Forsythe's Angry Hermit deck. The 19-year old Wong is another of the regions top players and is considering taking a year off from school to play Magic full time. He's already has several high Grand Prix finishes, Pro Tour experience, and he's the reigning Taiwan national champion.

Mori took some early damage in game one from a 3/3 Longbow Archers (thanks to Crusade), but he knew Wong's white weenie deck would have trouble finishing him off so he slowly played out mana creatures and Tangle Wire. His first Tangle Wire got Disenchanted, but #2 stuck and he then used Arc Lightning to remove the Archers. Wong played a Ramosian Sergeant on his next turn and when Mori tried to use his other Arc Lightning to get rid of it, Wong pitched Parallax Wave to cast Reverent Mantra and save his recruiter. 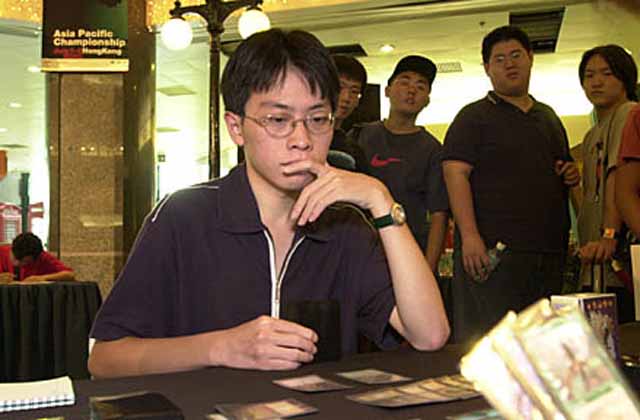 The next few then turned into a race. Wong was recruiting grizzly bears out of his deck as quickly as possible while Mori played out two Deranged Hermits and tried to swarm him. The race ended quickly when Mori played Masticore and killed the Sergeant. Wong was able to cast Armageddon, but Mori's Priest of Titania meant he could still upkeep his latest Deranged Hermit, even without any land. "Smash" said the squirrels and Mori took a 1-0 lead in the best 3 out of 5 match.

Wong played an early Mother of Runes which prevented Mori from effectively using his Arc Lightnings in game 2. The rest of Mori's hand was amazing: 3 Deranged Hermits and a super-cool, ultra-rare foil Gaea's Cradle. Wong really needed to cast Armageddon, but he didn't have one. Mori maneuvered the Port situation so that he could cast turn 4 Hermit. Then on his fourth turn Mori could have cast two more Hermits and a Plow Under, but he knew that Wong had Wrath of God in his sideboard so he decided to slow-play it. He settled for Plow Under and one more Hermit.

On his next turn, Mori used Arc Lightning just to tap the Mother of Runes and then served with everyone and cast Tangle Wire. The Tangle Wire basically meant that Wong could have blockers or land next turn. Blockers weren't going to hold off all those squirrels so he was forcing Wong to show him a great spell or start shuffling. Wong didn't have Wrath of God, but he did have Parallax Wave. The Wave bought him on more turn and forced Mori to play the Hermit that he'd been saving the whole game (since 5 of Mori's squirrels got removed form the game with the Wave). However, Wong's next draw phase didn't help and Mori went up 2-0. It was a pleasure to watch Mori - he seemed to understand the matchup flawlessly and make all the right plays. He even played around every sideboard card that he knew Wong could have in his hand. 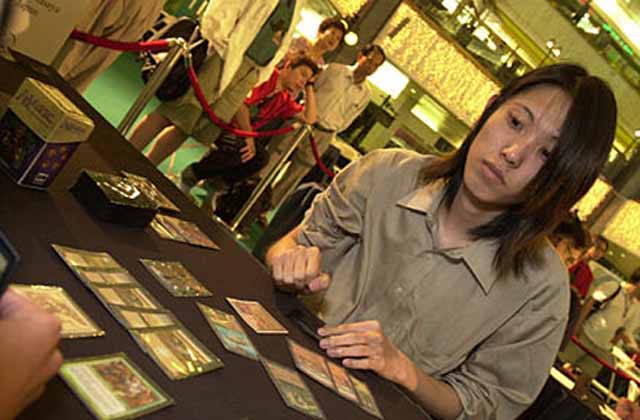 Another early Mother and Archers allowed Wong to deal early damage despite Mori's Arc Lightning. However, Mori once again took some early damage so he could safely build up his mana. Wong's Crusade put Mori under some decent pressure, so Mori played one Hermit just to chump block and then played Masticore and Skyshroud Poacher to try to win him the game. Wong swept the board with a Wrath of God, but Mori had one more Hermit in his hand, ready for just this eventuality. Wong couldn't deal with the new Hermit and took 9 damage for 3 turns in a row while all he could do was play useless Crusades.

Mori wins 3-0 and moves on to the semi-finals, just two matches away from defending his title.