This is an important match for both players, beyond the obvious reasons. Although Masaya Mori has won an unprecedented two Continental Championships, he has few other tournament successes. He admits to feeling pressure to win today in order to show that he has what it takes to be a consistent player. Masashiro Kuroda is in a similar position, with his recent Finalist placing at GP Yokohama being his best achievement since 1999, when he lost the finals of Nationals to Masayuki Higashino. 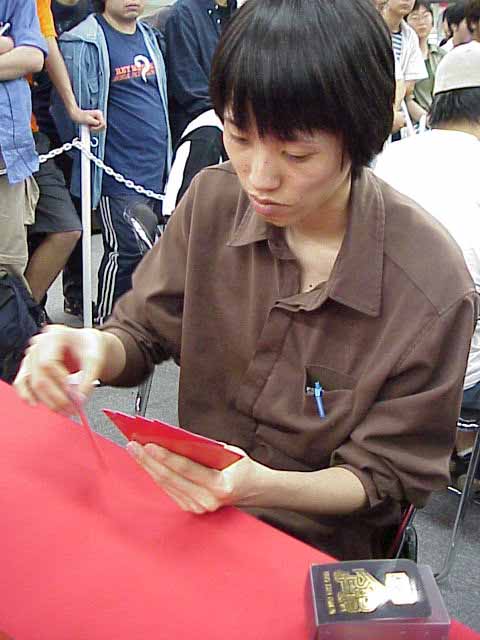 Mori started the match with a first turn Duress, choosing a Ghitu Fire over Urza's Rage. Mori concentrated on slowing Kuroda's development rather than building up his own offensive, using direct damage to blast a Birds of Paradise and a Thornscape Familiar. However, Kuroda continued to play land and played a Blastoderm and Tahngarth in quick succession. Mori put out a Pyre Zombie in an attempt to stop the pain, but the Zombie was taken out by a Seal of Fire. Mori was forced to use up both an Urza's Rage and an Assault to stop Tahngarth, and scooped when a second Blastoderm hit the table.

The second game began much as the first, with Mori choosing to eliminate Kuroda's mana creatures rather than build up his own offensive. He was slowed by Kuroda's third turn Port, which Kuroda used to keep Mori's red mana locked down. Mori attempted to shut down the Port with a Tsabo's Web, but Kuroda promptly shattered it with a kicked Thornscape Battlemage. Attempting to put the game onto his own terms, Mori got rid of the Battlemage with Assault and made a Pyre Zombie, but Kuroda refused to let Mori off the hook, removing the Zombie from the game with Scorching Lava. Kuroda hoped to end the game quickly with a Rith, but Mori Terminated it. With Kuroda taking damage from painlands, Mori upped the ante by playing a Plague Spitter, then another when Kuroda dealt with the first with a Seal of Fire. Finally, Kuroda's life was low enough that Mori was able to burn him out with two Urza's Rages. 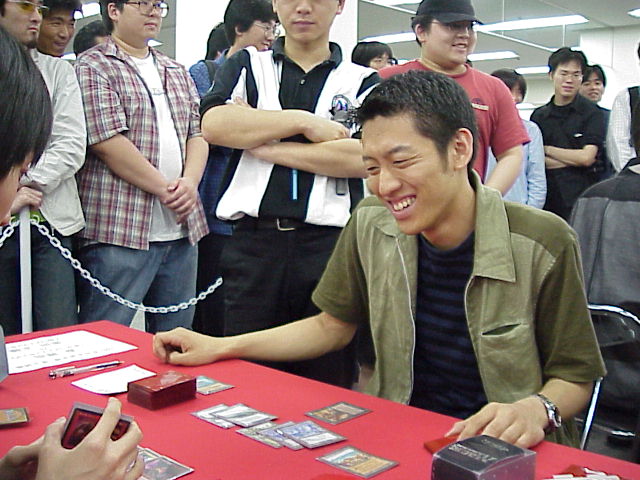 Kuroda got off to a fast start in the third game with a second turn Thornscape Familiar, while Mori struggled to play land. Starting with a Shivan Oasis, Mori was forced to bounce it on his second turn after getting mana to play a Darigaaz's Caldera, then playing a Tsabo's Web hoping to find land. Although he drew a Mountain, he was forced to discard, giving up Urza's Rage (his other choices were Plague Spitter, Tangle, Saproling Burst, the Shivan Oasis, Tsabo's Web, and two Void). While Mori continued to build up land, Kuroda amassed a Thornscape Battlemage and a Blastoderm on his side of the table. Mori slowed the offensive with a Tangle, and Terminated the Shivan Wurm Kuroda produced. A second Wurm met a similar fate, allowing Mori to stabilize at 5 lands with only the Familiar on Kuroda's side. Mori went for broke and tapped out to play Saproling Burst.

Kuroda spent a long time after drawing looking at his hand, finally playing a Blastoderm. Mori made three Saproling tokens at the end of Kuroda's turn. After playing Void for 4 to eliminate the Blastoderm, he attacked with three 3/3 tokens. Kuroda chose not to block, going down to 9 life (having previously taken 2 damage from his own painlands). After drawing, Kuroda again took a long time to ponder his next move, finally producing another Blastoderm. This time it was Mori who took a time out, staring at his hand containing Plague Spiter, Pyre Zombie, Darigaaz's Caldera, and Moss Diamond. He began making calculations, his fingers and eyes moving rapidly between his hand and the board. Eventually, he attacked with three 2/2 tokens, one of which went through (taking Kuroda to 7 life), one of which was blocked by the Blastoderm, and the last trading with the Familiar. After combat, Mori played Pyre Zombie and Caldera, and ended his turn.

Muttering "This is so hard" under his breath, Kuroda rearranged the cards in his hand, casting frequent glances at his life counter showing "7". He too began to make abacus-like movements with his hand. Tapping a Karplusan Forest for R (going to 6), he played Thornscape Battlemage with kicker, targeting the Mori's Pyre Zombie. Echoing Kuroda, Mori paused, almost screaming out "This is so hard." Finally, he sacrificed the Zombie to deal 2 damage to Kuroda. Untapping, Mori removed the last counter from his Burst, clearing his side of creatures. That state didn't last long, however, as he played Plague Spitter, evoking a half-laugh, half-sob from Kuroda. Kuroda knocked his deck and drew, but didn't seem pleased with the results. Once again he began calculating, and then brought the swing. Mori chose not to block, going to 11 life. Grimacing, Kuroda held up his Kaplusan Forest--his only source of red mana--saying "Can we pretend this is a Mountain?" When Mori laughingly shook his head, Kuroda extended his hand.