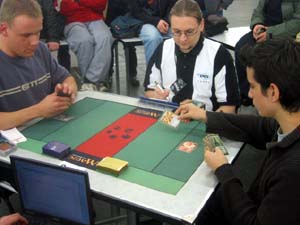 is a former German national champion, who made Top Eight of GP Vienna. His opponent is not less experienced; he finished Top 64 at PT Barcelona and Top 32 at GP Genua. And he is the first Greek ever to make a final Eight.

Georgios didn't like his draft very much. At one point he made a mistake of drafting a Scythe of the Wretched over an obviously better card for his deck, a Myr Enforcer. Dirk's Deck sports a lot of cheap Creatures, backed up by a massive 3 GG. If he cannot overwhelm his opponent right away, Georgios has some good late game cards like Tel-Jilad Archers, Mirror Golem and MegAtog.

Dirk started with a swamp, and Georgios made a Pyrite Spellbomb in his first turn. One turn later it was joined by a Bonesplitter, while Dirk delivered some early beatings with an Alpha Myr. Dirks Leaden Myr fell victim to the Spellbomb, and it looked like his beatings were being stopped when Georgios played Bottle Gnomes. In his turn Dirk used his one artifact removal - a Deconstruct - to get rid of the Bonesplitter, and used the mana to summon a Moriok Scavanger which brought back the Myr. Georgios played Hematite Golem, Dirk two Mana-Myrs, and the forces stood back, looking at each other, with the score being 20 - 18 for Dirk. Then Georgios sent in the Hematite Golem for 5, relying on his Bottle Gnomes for defence. Dirk went with all of his four guys in the red zone, forcing the Greece to block the Alpha Myr. Dirk didn't have or play one of his GG, and only put Georgios down to 14. In his turn Georgios added an Slith Firewalker to his forces and attacked with him and the golem, only to lose the Slith to a Terror. The Golem still dealt 3 points of damage to the German, who played a third Mana-Myr and kept his forces back this time.

Georgios also chose not to attack an added both Iron Myr and Tel-Jilads Chosen to the table. Dirk didn't seem to have anything, as he just passed the turn back. Georgios was not that friendly, as he played his dreaded Mirror Golem, imprinting his late Slith Friewalker in the process. Dirk still chose not to play anything, and got a hit from the Mirror Golem, that was joined on the table by an Ogre Leadfoot. Dirk Consume Spirited the Mirror Golem away, increasing his life total back to 13 that way. There still were some matters undissolved, as Georgios swung with the Leadfoot and summoned a mighty MegAtog! Georgios massive force of six creatures stared down on Dirks lone four small creatures, and when he sent his whole army in the red zone it was clear the game wouldnt last much longer. Dirk struggled a little and then it was over.

Georgios sides out Slith Firewalker and takes in Incite War, Dirk didn't sideboqrd at all.

To everyones surprise Dirk chose Goergios to play first. Dirks side of the table sees the first play with a Leaden Myr, that got stopped by an Yotian Soldier. Dirks summoned his own copy, and Georgios put a Pyrite Spellbomb on the table. Dirk played another Myr, while Georgios started to look for his big creatures with the play of a Serum Tank. Dirk summoned a Pewter Golem, though, with two Mana available to regenerate it in case of sudden death. Its chances of sucessful attacks were being stopped by an Tel-Jilads Chosen. That small guy was so good against Dirk, being able to stop most of his creatures by himself, that he cast Consume Spirit on it and attacked with the Golem, putting down the Greece player to 16. He didnt seem to be troubeld and only drew cards from the Serum Tank, playing a Scythe of the Wretched.
Together with the Yotian Soldier it had best chances of stopping the Golem. Dirk attacked with his Pewter Golem and his Soldier, that got blocked by Georgios copy. Dirk tried a predator strike, only to find his Soldier getting a Electrostatic Bolt in response. then dirk got some damage from Georgios Soldier, who was freshly eauipped with the Scythe.

Things were far away from looking good. He thought for a while and added a Moriok Scavenger to his force, that got back his Yotian Soldier.
Georgios had all the time he needed to draw cards from the Serum Tank, adding some small creatures to his army in the meantime. Dirk was forced to do something, but he couldnt - his army was was not able to deal with the incredible defense on the other side of the table. Dirk added an Fangren Hunter, while Georgios kept on drawing cards from the tank. All he needed was one of his many late-game cards that would win the game for him. Vulshok Battlegear made that goal come closer, and freshly equipped Bottle Gnomes made Dirks chances of winning even smaller. His fresh recruitment like Alpha Myr didnt help him in any way to get around Georgios Defense. He played Mirror Golem, imprinting Tel-Jilads Chosen. Together with the Equipment he was threatening to end the game within a few rounds. Georgios attacked with the Golem and added Hematite Golem and Viridian Joiner to his side of the table.

Dirk finally found somewhat of a threat with Vulshok Gauntlets. He equipped his Pewter Golem with it right away, but in response Georgios was using the Pyrite Spellbomb on him, forcing the Golem to regenerate and becoming tapped in the process. The gauntlets prevented him from untapping the next turn, while the Mirror Golem, now equipped with the Battlegear took big chunks out of Dirks lifetotal.
On Georgios side of the table were eight, on Dirks side seven creatures at this point.
In his turn Dirk only switched the battlegear and wanted to pass the turn - at which point Georgios showed his sideboard-card Incite War, forcing the game to come to a quick solution soon.
Dirk has no choice but to send his team, Terrorizing an Ogre Leadfoot before and having two mana in his pool still. The block look crippling for Dirk, who loses most of his team but the attacking Fangren Hunter with the Gauntlets. A prtedator Strike prevents the Scavenger folk from dying, but it is not enough. Georgios sent in his team and wins game and match.