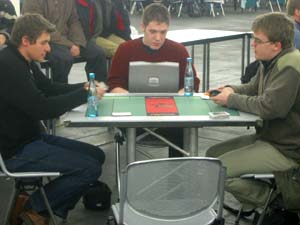 five Germans in the top 8, the all-German quarterfinal could not be avoided. It actually happened twice but this match is the higher profile one. The reason for that is Reinhard Blech, fresh off a win at GP Genova. According to him his other accomplishment are making day 2 at both other Mirrodin limited Grand Prixs in Europe - without making a single cent. Still, a GP win is a GP win and the other all-German match had two amateurs. The amateur flag is also attached to Scholz name, so a lot of money is on the line.

Blech put a card face down on the table and Hannes correctly guessed that the expansion number is even. He chose the right to play first but that allowed Reinhard to pick the side of the table and he wanted so switch. Scholz answered with words I am not going to repeat here and they got going. The matchup favored Blechs bomb heavy deck with Triskelion, Solar Tide, Lodestone Myr, two Shatters and a Detonate. Scholz deck features cards like Crystal Shard, Grab the Reins and Spikeshot Goblin, but I do not think that it is going to be enough.

Both players kept his hand but Reinhard was missing a Plains for his Auriok Transfixer and had to lead with a Mountain. Scholz had both a Plains and a Mountain and dropped a Silver Myr on his second turn, which met a Shatter from Reinhard. Turn 3 gave Hannes another Myr and a Transfixer. Blech replied with a Talisman and an Ancient Den, which powered up a Frogmite. Scholz had a good third turn though: Island followed up by his splashed Crystal Shard. Blech had wasted his Shatter earlier and apparently had no immediate answer to the Shard.

At that point Antonino de Rosa walked by and muttered: "How are all those lucksacks playing in a top 8!!" Some people apparently have issues with a 9th place finish. Everyone shed a tear for poor Antonino but then the Shard got to work again and returned a Krak-Clan Grunt, that Reinhard summoned along with his Frogmite. A Leonin Den-Guard came down equipped with Golem-Skin Gauntlets on Hannes side as well and Hannes rubbed Reinhards decision to Shatter the Myr in as the Crystal Shard dominated the table. But eventually Blechs Auriok Transfixer was active and the blue shard lost some of its power. The Den-Guard was still causing trouble for Blech and a Myr Enforcer did not help things as Reinhards board only consisted of two grunts, a Frogmite and the transfixer. All of those creatures have one thing in common - their power is less then two. When Blech dropped Solar Tide, Scholz was made aware of that fact as he lost the enforcer and the equipped Den-Guard and suddenly Reinhards men could charge in. Soldier Replica stepped up for Scholz to stop the attack and Crystal Shard was finally untapped in Reinhards turn so the situation was stalled for the moment. Reinhard tapped the shard and declared an attack. Hannes transfixer tapped the Frogmite and Reinhards grunts dealt four damage. When he followed his attack up with a Triskelion, the board suddenly looked pretty bad for Hannes. Granite Shard did not solve any of the questions Reinhard asked. As he had only seven lands, the Rustmouth Ogre he played was immediately returned to his hand and Blech mentioned that he probably would have won the game several turns ago if he did not waste that Shatter. He drew and played Culling Scales and as he had only three casting cost permanents to Hannes two shards and gauntlets, the scales were bad news for Scholz. They destroyed the equipment on Blechs next upkeep but Reinhard did not want to wait until they could eat the shards and used Shatter to take out the red one. Hannes was out of permanents now and the scales dealt with his last one, Crystal Shard. When Blechs men charged in, two Raise the Alarm tokens stepped up and kept Hannes alive - for one more turn.

Hannes played first and there were no mulligans again. The first non-lands were a Leonin Scimitar, a Gold and Silver Myr and an Atog on Scholz side. Blech had white, red and black mana on his third turn but no other play. Hannes dropped a Den-Guard and Reinhard answered with a Myr Enforcer that got powered up with three artefact lands. Regress returned it to his hand though. Scholz sent his crew in and dropped a third Myr. Blech replied with Silver Myr and the enforcer while he proved that he is indeed one of Germanys biggest trash talkers by constantly bashing his opponents choice to splash the Regress. Hannes Atog and the now equipped Leonin Den-Guard attacked anyway and both of Reinhards creatures blocked the soldier. Hannes chose to sacrifice his three myrs to his Atog and dropped Blech to five. He could have attacked with all his creatures. That meant less damage but his mana creatures would stay in play. His next play of Leonin Skyhunter might be able to go all the way as Reinhard was down to 5. But Hannes got punished for throwing away his myrs as his next draw was his seven casting cost Luminous Angel. Reinhard drew his Solar Tide of the top at one life and his Myr Enforcer was the last man standing. Hannes was still on six life when he finally got to cast his angel. As Reinhards last couple of draws were all blanks, it was good enough anyway and the angel took the game with Scholz sitting on two life.

Blech boarded out his Slith Ascendant for the third game, even though he had the right to play first. Strange times. No one mulliganed once again. Blech had no play until his fourth turn while Scholz had a very good draw with a Leonin Skyhunter, a Den-Guard and the Golem-Skin Gauntlets. When Reinhard drew his Culling Scales on his fourth turn and played it, Hannes even had the perfect answer for it with Raise the Alarm while his equipped Leonin Den-Guard and the skyhunter kept attacking. Reinhards fifth turn was also quite unimpressive as all he had was a Frogmite. When Hannes declared an attack, the equipment was met with Shatter though and only the 2/2 flier charged. As Hannes had no play to follow up with, Blech was in a good shape if only he could deal with the skyhunter. Triskelion did just that and Scholz had to pass his turn without casting a spell once again. The Culling Scales ate his last non-land permanent and Blech added a Vulshok Verserker to his team and attacked with that, the 2/2 Triskelion and the Frogmite. In his next upkeep the scales destroyed itself. When he wanted to attack, a Blinding Beam was entwined and tapped two of Reinhards creatures. Hannes finally found red mana on his next turn and it powered up a Granite Shard. A Gold Myr hit the table as well. It stepped up to block the Triskelion when it came in and the Granite Shard killed it. Blech had no other plays on his turn, but Hannes only dropped a useless Leonin Scimitar and a Crystal Shard, that did not look very impressive as Hannes had no creatures and Reinhard plenty of untapped lands. Another uneventful turn went by for Hannes, but when Reinhard declared his attack, he used Grab the Reins to take Blechs berserker and returned it with the Crystal Shard. Reinhard dropped a grunt and the berserker after combat. Scholz had his Luminous Angel as he drew his seventh land, but it was not enough. He took five damage on Reinhards attack step and Blech then sacrificed his Myr Retriever to his grunt and got his Triskelion back which was enough to finish Hannes off!