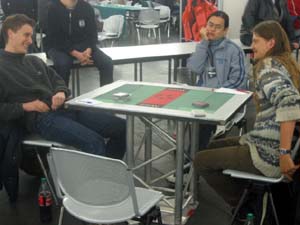 a top 8 dominated by Germans, fate decided that the only two Frenchmen would face each other in the quarterfinals.Yann Hamon is far from a surprise, after all he won an European Grand Prix using this very same format. Steven Gouin is a name that most of the non French readers are aware off, but he proved his valor on the draft tables to reach here.

After the draft, the general opinion is that Yann Hamon has an advantage, since the draft went well for him. He has a good Blue Green tempo deck, with two Goblin Replicas and a Mountain plus a Journey of Discovery. Steven struggled a little more during deck construction due to his low count of creatures. He had to play with some average creatures, but on the other hand has two Irradiate and three Terror, which should be quite good in this matchup. Only five of Yann's creature are Artifact, and pay 2 mana to destroy a big green guy is always welcomed I suppose.

Steven won the roll and opted to draw. "Allez France" was heard from the crowd, and the game began knowing that one of the semi-finalists is going to be French.

The action really began on the third turns. First it was Yann with Goblin Replica, then Steven with Cathodion. Since the Cathodion is bigger, the Replica stayed quiet and provided affinity to a turn 4 Thoughtcast for Yann. Steven played Bonesplitter and attacked, taking a quarter of Yann's life total and passed.

With only one card, Yann turned the game around and put Steven in a defensive position. Domineer made all the creatures in play to be on Yann's side. Steven played a Wanderguard Sentry and saw a hand of Tree of Tales, Fangren Hunter, Goblin Replica, Cobalt Golem and Thoughtcast. The Sentry blocked the Cathodion. Yann took 3 of mana burn, but made sure he was still the only one with creatures in play. After the attack he played a couple more: Tel-Jilad Chosen and Silver Myr.

Steven played another a Myr Prototype and equipped it with the Bonesplitter, but he was clearly falling behind. Yann attacked with the Chosen and the Replica, but since the Prototype would get a +1+1 counter on the next turn, Steven declined to trade it. But after the attack, the scenario got even worse for him. Yann destroyed the Bonesplitter with Turn to Dust, cast a Fangren Hunter plus the second Goblin Replica in his hand and played Stalking Stones. An on the next turn made Steven concede immediately.

Steve choosed to draw once again. Things looked ugly for him after a mulligan and a first turn Bonesplitter from the other side. Unexpectadly, Yann didn't play anything else to follow his Bonesplitter. The first attempt to play a creature occurred on Steve's fourth turn, but it was only exactly that, an attempt. Yann countered the problematic blocker with an Override for 2, powered by the Equipment and an artifact land.

Finally Yann moved. He played a Myr, a Thoughtcast, Stalking Stones and equipped the Myr. Steve made only a Myr Prototype which wasn't enough to stop what was coming next, a Wurmskin Forger, giving +2+2 to the Myr, and +1+1 to himself. Steve played a Woebearer and put it into the Red Zone. Yes, it doesn't have haste, but Steve asked Yann to sign it, since it's Yann's card (remember Grand Prix Lyon). But to pay for the Woebearer, Steve tapped all his 5 lands and was unable to pay for the Prototype attack or block, so the following turn was devastating.

Yann send the Woebearer to Steve's hand with Regress. Played Mask of Memory and equipped the Forger with it. Attacked for 8 damage and drew 2 cards, discarding a Forest. Steve untapped, drew and passed the turn without playing anything. He needed 2 mana for the 4/4 Prototype block.

Yann sensed the Terror, and moved Mask of Memory from the forger to the 5/3 Myr. Played as well an and sent the Prototype back to Steve's hand and attacked. Steve did have the Terror for the forge, but it was almost irrelevant. The Myr went unblocked, Yann drew 2 more cards, and played a couple of creatures.

The situation: Steve at 7 life with only five lands on the table. Yann with 8 lands a 5/3 Myr, Tel-Jilad Chosen, Silver Myr, Stalking Stones, Bonesplitter and Mask of Memory.

Yann Hamon wins 2-0 and advances to the Semifinals.