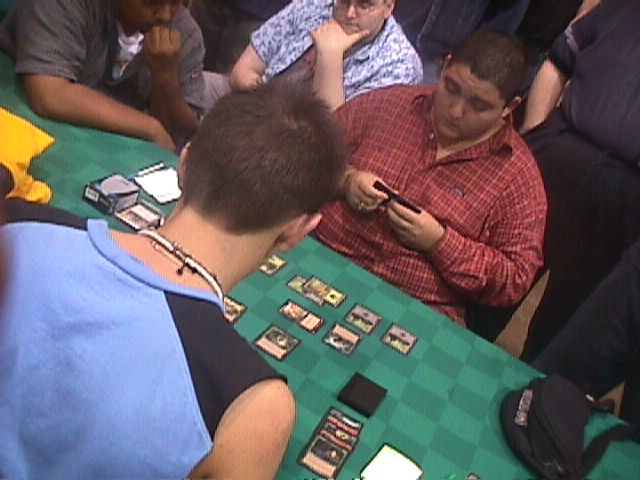 Antonino De Rosa vs. Matt LindeA more savage beating has never been witnessed in a limited Top 8 match in the history of the game. Matt Linde's red/green deck was on autopilot against DeRosa's black/green rochester deck in both of two quick games.

Game one saw DeRosa discard on turn three after Linde got things started with a Werebear. DeRosa was in the game for awhile after peeling forests in consecutive turns, though. After going down to 15, DeRosa dropped the bomb - Stalking Bloodsucker. Apparently DeRosa thought he could out-race the savage beats of red/green, and race he did against a Rabid Elephant and Barbarian Lunatic put into play with Zoologist, a Chatter token and an Ember Beast.

Even after Vivifying a land to block, DeRosa was in trouble, and while Linde ripped a Seton's Desire while on threshold to win, he sat with a Shower of Coals in hand.

Linde 1 - DeRosa not a chance 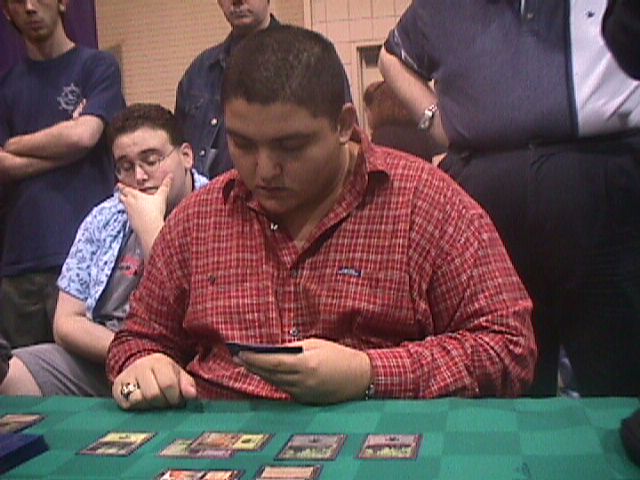 Antonino De RosaAfter voicing his opinions, thinking that his choice may be wrong, Antonio DeRosa chose to let Matt Linde play first, and choice that he's sure to regret on his 6-hour drive home. Though, admittedly, "Nothing could stop that draw Linde had. I've never seen anything like it."

Linde kept a hand of four land, Barbarian Lunatic, Ember Beast, and Rabid Elephant; not the makings of a quick hand, but DeRosa must have cut Linde perfectly. Linde drew a Werebear, and played it turn two, and followed it with a Chatter and Ember Beast on turn three. Turn four Linde smashed with the token and Beast, and knocking DeRosa to 16. Linde made a Rabid Elephant after the attack. 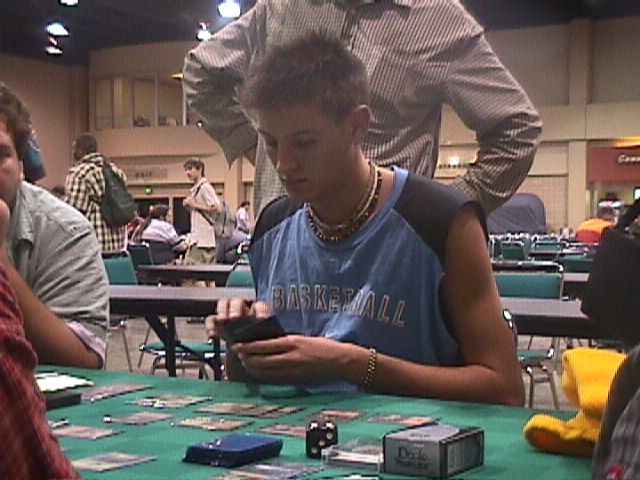 Matt LindeDeRosa, desperate to stop the tempo, dropped a Springing Tiger, his first spell of the game. Linde untapped, peeled a Thermal Blast, dropped a land, and killed the blocker, and hit DeRosa for 8 on turn five. Linde's turn 6 and the final turn of the game saw him top-deck Shower of Coals to deal with DeRosa's blocker and deal some incidental damage to Antonio. Chatter token, Rabid Elephant, Ember Beast, and Werebear went to the red zone, and the onlookers (myself includeded) were stunned at Linde's efficient killing machine.

Linde expects to win his match against Andrew Johnson but his prediction for the finals is not as upbeat. "I may as well just concede to Eugene. Who can beat six Mystic Zealots?!"

Final Result: Janitors have been called to clean up the remains of Antonio's deck and Matt Linde moves on to the semi-finals.