In an eerily similar rematch of 1998 US Nationals, Peter Leiher met Matt Linde in the quarterfinals. As in that match, Linde played an aggressive deck with many small creatures, while Leiher played a deck with many powerful blue and black spells, card drawing and few sources of damage. Of course, that was Standard and this is Limited. This time, Linde's deck was a red and green beatdown machine, while Leiher had a slower blue and black deck with great spells but weak creatures. 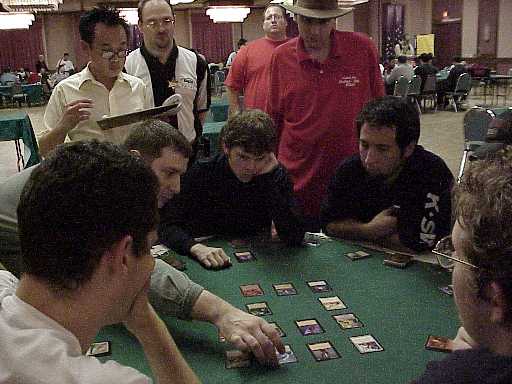 Linde won that match in 1998, and went on to win Nationals. The young player has been a fixture on the Pro Tour ever since. Pete Leiher has been around even longer; he was a member of the US National team way back in 1995 and made the top eight in US Nationals two other times, as well as attending most of the Pro Tours since the Tour began.

Matt won the die roll and chose to play first, which would be key in this match. However, Pete surprisingly played the first creature of the match, a Vodalian Hypnotist. Linde answered with a Pincer Spider followed by Kavu Monarch, while Leiher could only make Linde discard with the Hypnotist for the next few turns. Matt was forced to discard two Scorching Lava and an Explosive Growth, but made up for it by playing great creatures. First he dropped a Serpentine Kavu, and then a Kavu Climber. Thanks to the Monarch (which was also 5/5 at this point), they both gained trample, and Leiher was unable to stop Linde's impressive army. The game was ended by the seventh turn; who says this isn't Constructed?

The second game Leiher had a better start, with a first turn Tidal Visionary and third turn Shoreline Raider. Linde played one of his three Yavimaya Barbarians on his second turn. With protection from blue, these guys could prove to be quite a problem for Peter. However, Leiher made his Shorline Raider black with the Visionary and was able to block. Linde wasn't going to let the Barbarian go so easily though, and played an Aggressive Urge to save it and gain card advantage. Leiher regained the advantage with an Exclude on Linde's Slimy Kavu, then played one of his few high quality creatures, a Duskwalker. Linde had only land left in his hand and was forced to say "Go" on his next turn, which is never a good sign. Pete played a Phyrexian Slayer, and although Linde started to finally draw non-land spells, he was unable to stop the evasion creatures from killing him in a few turns.

Linde got to play first in the third game, which once again proved to be key. He cast Yavimaya Barbarians on the second and third turns, while Pete could only play a Metathran Zombie. The Barbarians were joined by an Ancient Kavu, and Leiher had no more creatures. He cast a Lobotomy to keep Matt from playing yet another creature, but the protection from blue creatures were too much, and a Breath of Darigaaz did the final few points of damage. This game was over on the sixth turn, not bad for limited, with Linde repeating his 1998 performance.