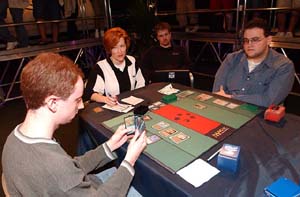 Last year, Eugene Harvey used this very tournament as a springboard for his Magic career. Today, Matt Rubin has the opportunity to do the same. Rubin is a very talented, respected player in the Northeast, but this is his first high profile finish. Because this year's Nationals is single elimination, only one of these players will advance, and the loser cannot make the team. The question left to answer is whether the now proven and experienced Harvey will make back-to-back United States National teams, or if Rubin will play the role of this year's Harvey, and go on to become one of Magic's lesser known talents revealed to the world. An interesting thing to note is that Rubin and Harvey are staying in the same house this weekend. Needless to say, they did not help each other playtest last night.

Harvey opened with Birds of Paradise, and followed up strong with Merfolk Looter and a second Birds. Wild Mongrel hit play soon after, while the Looter got to work, discarding Deep Analysis, which was flashed back. Rubin Conterspelled it, and summoned Psychatog. With Rubin tapped out, Harvey cast Opposition, and seemed to have the game well under his control. Rubin discarded Deep Analysis to Psychatog and flashed it back, ending his turn tapped out. Harvey simply summoned Llanowar Elves, content for the moment to sit back on his creatures and tap down Rubin's resources on upkeep. AEther Burst was used in response to bounce a Birds of Paradise, and a second Burst brought back two more creatures. This gave Rubin a small amount of breathing room, but also left him tapped out. Those creatures would come back out on the following turn, except Harvey only had two lands out. Using his Bird and/or Elves to replay his bounced creatures would mean making his lock weaker on Rubin's next turn.

Harvey tapped down some of Rubin's lands, which caused him to take some time to contemplate the proper move.

At this very moment, America was waking up to the beginning of a new day. It was a Sunday; it was a day of rest. Farmers sat on their porches, some relaxing in an old rocking chair, listening to the radio. Some families went to Church. Teenagers were participating in traditional American youth activities, such as attending rock and roll concerts, or perhaps going to see a feature motion picture. Tomorrow promised Monday and another five days of work, but today provided a final day of relaxation from the monotony of the nine-to-five life.

Matt Rubin, however, was still thinking about what to do. 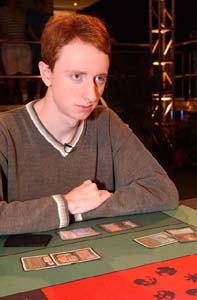 Eventually, mana was floated and AEther Burst #3 was played, slowing down Harvey a bit more. Psychatog then attacked for a point of damage. Harvey brought his creatures back out and tapped down some of Rubin's lands. Enough mana was available to summon Nightscape Familiar. The next turn was not so kind, as Harvey had access to all his creatures, and tapped down all but two of Rubin's lands, as well as the 'Tog. Fact or Fiction was cast in response, giving Rubin a choice between two lands and Counterspell, or land and Recoil. Rubin took the Counterspell pile. The Familiar attacked for one, bringing Harvey down to nine. Most of that damage had been dealt by painlands.

Deep Analysis drew Harvey some more cards, and he continued to deprive Rubin of most of his mana, while tapping down his creatures as well. A second Opposition gave Harvey insurance against Recoil. The game got very interesting at this point, because Rubin had accumulated enough lands to operate under Opposition. A second Psychatog essentially gave Rubin another mana source to work with, since it absolutely had to be tapped down or blocked. Harvey summoned a pair of Mongrels and cast Call of the Herd, giving Rubin less space. Recoil took out the elephant, but Harvey dealt the final five points of damage to take the first game.

Rubin played a second turn Standstill, which Harvey immediately broke with Merfolk Looter. A Mongrel joined Harvey's side. Ghastly Demise took out the Looter, while the Mongrel continued to attack and was joined by a second, along with a Birds. Rubin summoned Psychatog to stop the assault. Harvey cast Opposition and Rubin had Counterspell, but Harvey used madness Circular Logic to make sure the enchantment hit play. Another Ghastly Demise took out the Birds and Rubin cast Fact or Fiction. The piles presented were two Nightscape Familiar, land and Fact or Fiction, Ghastly Demise. Rubin took the three card pile. Both Mongrels attacked, and with Rubin tapped out, Squirrel Nest resolved without a fight.

Rubin now cast Engineered Plague, and Harvey added Circular Logic to the stack. Counterspell had the final say, and the black enchantment hit play on squirrels, nullifying Harvey's Nest. The Mongrels brought Rubin to ten life points. A pair of Nightscape Familiars were summoned, followed by Standstill. With Rubin tapped out the Mongrels got through once more, bringing him down to six. The Mongrels then tapped down a 'Tog and Familiar, which was followed up by a double Mongrel attack. The unblocked Mongrel was pumped multiple times, which was enough to convince Rubin to break Standstill and Recoil it. A counterwar resulted, and the Recoil resolved. Static Orb hit play a turn later. This obviously put Rubin into a very tough situation, and he had to consider all his options.

At this very moment, a few miles from this very venue, families were enjoying their stay at Disneyworld. Mom and Dad would save some money through the year to travel down to Orlando, and enjoy the rides, attractions and overall experience of the Disney magic. Unfortunately, one of the negative aspects of such a vacation are the lines that wait for every ride. Children are forced to stand for hours, staring at a wall, with very little to entertain them. These are precious moments of their youth, wasted. In their boredom, it is likely that most children will contemplate their life experiences. The good times and the bad, their past influencing the present, and the promise of the future.

While those children stood on line waiting, Matt Rubin was still thinking about the right way to get around Eugene Harvey's Static Orb. A second Engineered Plague was cast naming Birds, giving Harvey only the Mongrel to use under his lock. The combo pieces were there, but not enough creatures were on the board to seal the deal. Plus, with a full graveyard, Rubin's Psychatog was a dominating threat. A second Mongrel improved things drastically. However, Recoil broke Rubin out of the lock, giving him the green light. Upheaval set the board at a land, two Familiars and a Psychatog to give Rubin the second game.

Harvey had an explosive draw, with a turn one Birds, and turn two Mongrel followed by Llanowar Elves. He cast Deep Analysis on the following turn, but Rubin had Gainsay. Psychatog left Rubin tapped out, clearing the way for Opposition to resolve. Static Orb hit play the following turn, and with three creatures already on the table, the rest was practically academic.

Yes, Virginia, there is a Santa Claus. 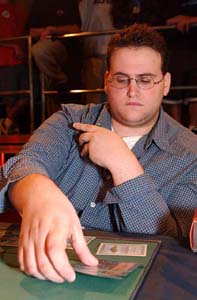 Rubin mulliganed his opening hand. He kept the following one land hand and missed his second land drop. Ice tapped down a land on Rubin's upkeep, and he found a second land. Squirrel Nest was played, and Rubin was still stuck at two lands. Harvey's squirrel army began to increase in numbers and attack Rubin, who was up to three lands. Nightscape Familiar was summoned, but Rubin still had a great deal of catching up to do. Engineered Plague helped out, dealing with the squirrel problem. Standstill helped Rubin catch up even more, and suddenly the game became very interesting. Psychatog resolved after a counterwar, but Harvey got ahead on card advantage thanks to Deep Analysis.

Opposition resolved soon after, followed by Static Orb and a fourth creature. Rubin cast Fact or Fiction on end step hoping to see a Recoil. When it wasn't there, he shook his head and knew he had lost.