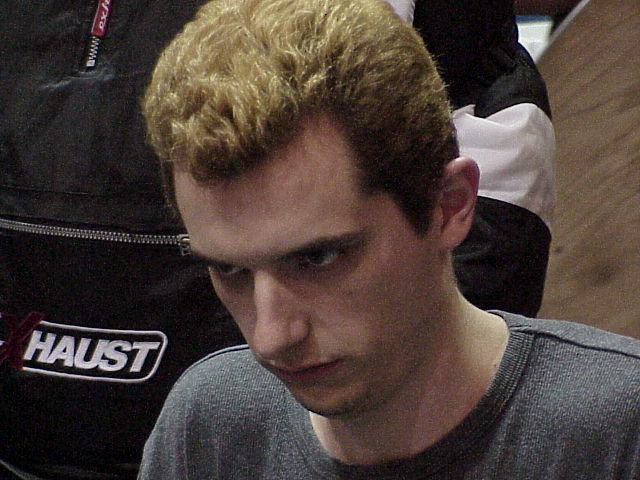 Matt was at the top of the standings for most of the tournament. He had clinched a Top 8 spot in Round 13. Matt and Kurt were paired for Round 14 and Matt attempted to knock Kurt out of the Top 8. Kurt took the match 2-0. Kurt went into this match looking forward to a chance to knock Matt out of the Top 8.

Matt Vienneau recently won Grand Prix Dallas. He has been a consistent fixture on the Pro Tour for some time. He has had good finishes in past tournaments, but until Dallas, none stood out. With his newest Top 8 appearance, he appears to be on a real streak.

Kurt Hahn is best known not for his tournament accomplishments, but for having invented 5-Color Magic. 5-color is a popular variant of Constructed magic. Kurt came to the tournament because he was qualified for the under 1700 rating prizes. After winning a G.P. Trial, he really liked his chances to win money. He entered the Top 8 with a guaranteed $2,300.

Matt had a White, Blue, and Black deck and Kurt had a White and Blue deck with a touch of Green.

Matt won the roll and decided to play. The first play was an Angelic Shield by Kurt on turn two. They continued to play land until Matt played Slinking Serpent on turn 4. Kurt played a Sawtooth Loon on turn 4, showing that he had very little to play. The Loon then returned itself. Matt then played a Phyrexian Scuta without the kicker. Kurt played his second white source, and played a Crusading Knight. The game slowed down at that point, with both players playing flyers and holding back. Matt played a Stormscape Master that looked like it would control the board. Kurt on his turn however, sacrificed his Irrigation Ditch, and cast Treva. A couple of turns progressed and Kurt could not effectively attack due to the Master's white ability. At the end of each turn, Matt would use his Master to drain Kurt and draw a card from Benalish Heralds. Then Matt Death Bombed Treva and played a Stalking Assassin. A few turns later, Kurt conceded the game at two life. 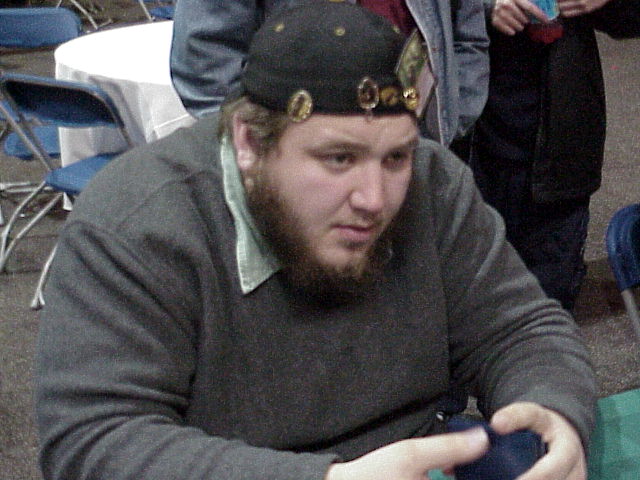 Matt kept a land light hand with a Swamp, a Plains, Stormscape Master, Aurora Griffin, Bog Down, Stalking Assassin, and Vodalian Serpent. Kurt played first. He played an Island and a Stormscape Apprentice, then a Plains and a Galina's Knight, and then a Forest and a Thornscape Apprentice. Matt then layed his third land and cast Bog Down. Matt then missed a land drop and turn five, cast Phyrexian Scuta. It got bounced by Kurt's Angelic Shield. Matt was at 4 life and decided to Spite/Malice the Galina's Knight in his main phase. When that got Prohibited, Matt conceded.

In this game, Matt was going first. Kurt played a turn one Tidal Visionary. He played a turn three Traveler's Cloak on his Visionary and that was all he played for the first 4 turns. Matt on the other hand played a turn 2 Thrush, a turn 3 Stalking Assassin, and a turn 4 Fact or Fiction. The Fact of Fiction reveled an Ancient Spring, a Glimmering Angel, Phyrexian Scuta, Confound, and Slinking Serpent. Matt got to keep the Ancient Spring, Scuta, and Confound. On Kurt's turn 5 he sacrificed the Irrigation Ditch and cast a Thornscape Apprentice and a Shackles on the untapped Assassin. Matt Probed with kicker and discarded land while Kurt discarded a Loon and Disciple of Kangee. Kurt then played a Razorfoot Griffin. Kurt then noticed that Matt had been eyeing his Visionary. He stopped using it for anything and began asking Matt how the Death Bomb in his hand was looking. The best part was, the Death Bomb was in his hand, and he couldn't use it for some time. Then Matt started to cast the spells backed up in his hand. Kurt tried quite well to race with his Griffin and later his Silver Drake, but the Drake was double blocked by a Aurora Griffin (which would have allowed Matt to use the Death Bomb in his hand, had he realized) and a Dream Thrush. The Griffin couldn't quite keep up the race, even though Kurt played around the Death Bomb perfectly, and Kurt finally had to stop attacking with Matt on 10. Matt had a Scuta and a Heralds at this point, and all it took was time before Kurt lost to the creatures.

At the end of the match, Kurt revealed the Treva in his hand but he didn't have the Forest to cast it.