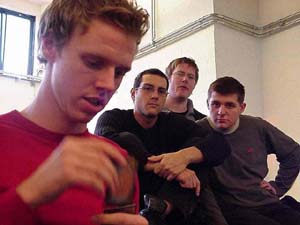 Lippert won the dice roll and elected to play first. Lippert was fine with his hand but Jorstedt took a while to decide whether to keep it or not.

"Need some pen or paper, or a calculator?" – Lippert

Jorstedt decided to play safe and mulligan it.

"Didn't want to throw the match on a gambit." – Jorstedt

His second hand was fine and he came out with a Phantom Whelp and then a Barbarian Lunatic after the Whelp attacked and bounced back to his hand.

Lippert didn't make a monster until he dropped a Pardic Arsonist on turn 4. Jorstedt held that in check with a Halberdier so Lippert added his own first-striking monster in the form of a Pardic Lancer.

At the moment it seemed the Barbarians were having a little civil war between themselves. The Lunatic took down the Lancer and the Whelp returned. Lippert had a brought in a second Barbarian with first strike, a Hell-Bent Raider. A Firebolt hastened it on its way.

The players continued to trade blows with their three power monsters with Jorstedt taking a clear lead. A Thermal Blast removed the Halberdier but Lippert had no answer to Jorstedt's Aven Windreader. Jorstedt enchanted it with Crackling Club and the attack put Lippert at two life and within range of the Firebolt in Jorstedt's graveyard.

"Bad draw?" Jorstedt asked.
"My hand was all lands at the end of the game," Lippert replied.

Game 2 didn't start too well for the German either as he took a mulligan, but then Jorstedt had his second mulligan of the match to even things out a little.

The game stuttered a little as Lippert laid only mountains and Jorstedt skipped a land drop on turn 4. When he found a fourth land he laid a bomb in this matchup – an Aven Smokeweaver that looked especially strong against Lippert's mountains.

Mattias Jorstedt At five lands Lippert brought in his first monster, a Pardic Lancer, and a first Swamp brought a laugh from the crowd as he was finally able to summon a Barbarian Outcast.

Jorstedt went cards up on Lippert with a Deep Analysis and then brought in a Pulsating Illusion. This didn't stay long as Lippert burnt it from the skies with a Violent Eruption when Jorstedt tried to attack with it.

Jorstedt was content to hold off Lippert with the virtually untouchable Smokeweaver and attack with a Possessed Barbarian. Lippert finally got rid of it by discarding cards to his Lancer to make his graveyard large enough to kill the Smokeweaver with a Ghastly Demise. A Whelp took it for the team when the 5/2 lancer charged in.

The card advantage from Deep Analysis was starting to show as an Aven Windreader came into play on Jorstedt's side. Lippert had to resort to an Anarchist/Morgue Theft combo to provide a perpetual blocker for the Possessed Barbarian.

Jorstedt missed that he could kill both of Lippert's Barbarian Outcasts by turning his two Swamps into Islands with a Dreamweaver but it didn't matter as he had so much control. He changed just the one so the Serpent could attack with everything else. Lippert threw everthing in the way of the Dreamwinder to try and take that down. It worked but he was left on six life and Sonic Seizure and Fiery Temper sent him crashing out of the tournament in flames.