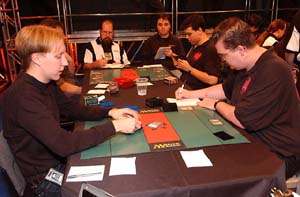 Few players have a career as long and lettered as Darwin Kastle. A Pro Tour and Invitational Champion, he's been making Top 8's since way back when. Sweden's Mattias Jorstedt is no slouch himself, having been to more than a dozen Tours, but he's never reached the fabled third day before this weekend. Despite the early hour and the pressure of the upcoming match, both players were friendly and animated. They chatted about their preparations the night before, finding they shared the decision to do only a little testing. A good meal and a good night's sleep were far more important.

Both players mulled, but were satisfied with their next six. Kastle's was a strategic mulligan. "Against most decks, I'd keep that hand, but since I wasn't doing anything until turn three, I couldn't keep it here."

Kastle started things off right, Duressing Jorstedt and seeing his two lands, Bird, Cloud of Faeries, Intuition and Brainstorm. He took Brainstorm. He followed that up with Chainer's Edict on Jorstedt's Birds of Paradise and then another Duress to strip away the Intuition. If he had any follow through, it looked like Jorstedt would be sunk. Jorstedt drew Living Wish and passed it back.

Kastle untapped and Tutored during upkeep, thinking hard. "Tough decision?" asked Jorstedt. "Well, I've got one card in hand and only three land in play, my options are somewhat limited." He settled on Treetop Village, put it into play, and gave the turn back to Jorstedt. He cycled Cloud of Faeries. Then he untapped and busted out Cabal Therapy. Kastle shrugged. Jorstedt named Spiritmonger. A hit.

With Kastle now on an empty hand Jorstedt went to the board with Living Wish, getting Raven Familiar. He had to wait a turn to get things going with it. Kastle untapped and drew a Therapy of his own. The Village started to work over Jorstedt. He dropped Wirewood Savage and passed it back. Both players had empty hands. Kastle drew Yavimaya Elder to quicken his clock. Jorstedts draws went Birds, Savage, and then they were on to Game 2. 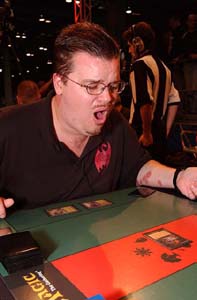 Jorstedt Living Wished for Cavern Harpy and passed it back. Kastle was ready with Cabal Therapy and Llanowar Elves to leave Jorstedt with just Wirewood Savage and lands. He drew Cloud of Faeries and made ready to cycle. Kastle, firing on all cylinders, dropped Pernicious Deed.

Jorstedt's face fell. He drew his Soul Warden and scowled slightly. Kastle only seemed to grow more agitated as his control on the game increased. However, he soon Tutored up a Stronghold Taskmaster, and with it safely in play he relaxed completely. Jorstedt put up the pretense of defending himself, but Kastle's troops were quick and vicious.

Kastle had to mullignan, and split a sleeve while shuffling his deck. After resleeving and reshuffling his deck Kastle looked up with a confused expression. "I was drawing ... seven? No, six. Six."

"And here I thought you were a sweet guy." - Darwin Kastle

Kastle mulliganed again. It was clear that the five were good. Jorstedt led with Havenwood Battleground. Kastle dropped Cabal Therapy. He named Aluren. Jorstedt had two in hand. Kastle hammed it up. 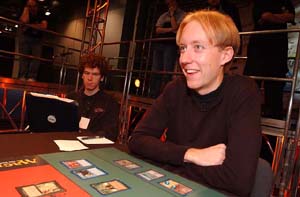 Jorstedt dropped Wirewood Savage and turned it back over to Kastle. He played Birds and Therapied again, this time for Living Wish he'd seen in Jorstedt's hand. Jorstedt had drawn another in the meantime. Suddenly his hand was just Polluted Delta.

Kastle got to work on killing him. Yavimaya Elder and Treetop Village made for some pretty quick beats. Jorstedt drew Raven Familiar, but his lands of partially-depleted Battleground, island and Delta weren't helping. He drew Deed and Intuition while Kastle brought him to nine.
Jorstedt drew another Battleground and played out his Deed. Kastle held back on his Villages, just swinging with an Elder and making a second one. Jorstedt made no move. Kastle dropped a Dust Bowl and knocked out the Battleground, forcing Jorstedt to Deed for three. Kastle searched out four lands and smashed Jorstedt for three.

Jorstedt was at four with nothing but two lands in play. He drew, and extended the hand.

"This was your first Top 8? Congratulations." - Darwin Kastle