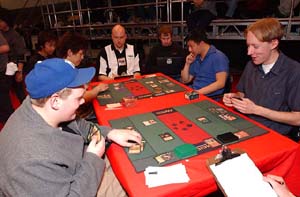 He pointed to teammate Jon Stern, matching from the rail.

Confidence is apparently not a factor for Top 8's these days. Whatever they say about their chances, Canadian Richard Hoaen and Mattias Jorstedt of Sweden have shown that they have skills that pay all sorts of bills. Hoaen stuck to his black-white clerics guns for the final draft, but found them to be overdrafted. Jorstedt is playing the oft-forgotten red-black archetype, the same used by Kai Budde to win Pro Tour – Chicago.

Hoaen kept a hand of five land, Entrails Feaster and Aphetto Exterminator. Jorstedt mulled his opener, and Hoaen permitted himself a small smile. He morphed his Exterminator on turn three. Jorstedt played a morph of his own. Hoaen wasted no time in flipping his up to gain the advantage and smash for three.

Jorstedt dropped a Vile Deacon. Hoaen punched through for five more before playing Daunting Defender. Crested Craghorn showed up just in time to keep the Entrails Feaster from getting out of hand. The Deacon got through for four. Hoaen returned the favor for six and sat back on his Death Pulse.

Here Jorstedt blundered, forgetting that the Exterminator was a wizard. He dropped Thoughtbound Primoc, and Hoaen threw a knowing smile to Stern. Jorstedt saw it a second too late and slumped his shoulders.

Catapult Squad hit the table for Hoaen and he ended his turn. Jorstedt passed the Primoc over and swung in with the Deacon. Hoaen blocked with the Defender and cycled Death Pulse. Anurid Murkdiver was too late to be a threat. Hoaen played a Lowland Tracker to minimize the threat of the Festering Goblin, and bashed again. Jorstedt just collected his cards. 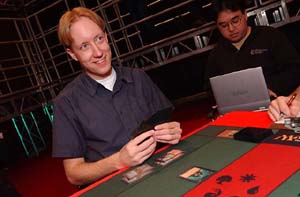 While shuffling up, the conversation turned to Magic Online.

"It was my summer job, at least, under the old prize structure. I made about a hundred bucks a night." – Richard Hoaen

Jorstedt was duly impressed. He got the beatdown draw for Game 2, with Wretched Anurid and Blade Sliver. Hoaen put a morph in the way and Jorstedt replaced it with Vile Deacon. Hoaen was staring at a Daunting Defender that could stop the beats on the following turn, so he readied his Death Pulse for the Deacon. Jorstedt hit back with Sparksmith and Goblin Grappler, prompting a "What!" from Hoaen for each.

He hoped the Daunting Defender would be enough. Jorstedt showed him a Death Pulse of his own.

"That draw's a nice one." – Richard Hoaen

Hoaen dropped a Gustcloak Harrier and a morph, but he was running out of time. Jorstedt shot down the morph (Skinthinner) and brawled with the Anurid. The 'Smith damage was keeping it deceptively close. It wasn't enough, though, and Shock finished things.

Hoaen kept a draw short on white mana for the third game and after trading Festering Goblins with Jorstedt found himself without a third-turn play opposite Blade Sliver. He cycled Barren Moor and turned up Skinthinner. Without any more land in hand he raw dogged it and traded with the Sliver. 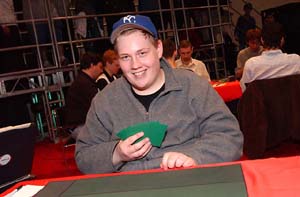 Hoaen continued to fail to draw lands while Jorstedt tattooed him. Murkdiver, Vile Deacon and Goblin Sledder all got in on the party. Jorstedt even had Thoughtbound Primoc, but a face-up Exterminator stole it again. Hoaen was still way behind. By the time he drew the plains all he could do was play Renewed Faiths to stay in the game. Two turns later they were on to Game 4.

Hoaen got on the board quickly with Festering Goblin, then cycled Renewed Faith to find land number three. Jorstedt hit his first three drops, but had no play on his third turn. Hoaen drew and played Whipgrass Entangler, and since he wouldn't get sacked by his own Festering Goblin, dropped Entrails Feaster as well.

Or at least so he thought. Chain of Plasma hit the Entangler at end of turn, and then a cycled Death Pulse left him without a board. Hoaen was meanwhile drawing plains and not the second swamp he needed for his Death Pulse. Jorstedt had a field day, playing a steady stream of monsters. Soon he was on his way to the semifinals.