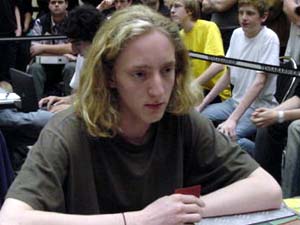 hero Maxime and Vassilis Fatouros from Greece are both quite unexperienced. Vassilis competed at his first PT in San Diego earlier this month and Maxime never made a day 2 or won a PTQ before. Vassilis brings Goblins to the table whereas Maxime plays a mono red land dectruction deck.

Both players keep their opening hands and Vassilis starts with 3 Goblin Sledders. Maxime´s first plays of the match are a Chrome Mox, imprinting Demolish, and a Stone Rain targeting a Mountain.

Next turn a Slith Firewalker gets blocked by a Blinkmoth Nexus. Damage goes on stack and when Vassilis tries to save his manland Maxime seems a little suprised. He shrugs and plays a Electrostatic bolt targeting the Nexus but loses his own Firewalker.

Vassilis is struggeling a little with his lands and things start looking grim for him as Maxime plays an Arc Slogger on his next turn. Maxime has the game under his belt until he starts shooting 2 Goblin Sledders and a Sharpshooter. Now he is left with just 5 cards in his library and with Vassilis on 4 life and nothing good left in his deck Vassilis just plays chump blockers for the Arc Slogger and waits until his opponent gets decked.

Maxime is clearly very nervous and should have won Game 1 if he would have been a little more patient with his Arc Slogger. 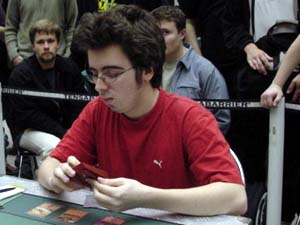 Vassilis has to mulligan but is first to play with a Sledder. Once again Maxime stone rains Vassilis´ land on turn 2. Slith Firewalker enters play and red zone for Maxime but is stopped from attacking next turn as Vassilis plays a Warchief and equips it with Skullclamp. Another Warchief comes down which does trade with the Firewalker, yielding Vassilis 2 cards.

Vassilis plays a Clickslither next turn and combined with 2 Siege-gang Commander he is able to deal about 237 damage to Maxime.