o matter what happens here, no matter if the roof collapses and crushes No. 2 Ranked Reid Duke's perfectly flowing mane, no matter if he walks out of the room without ever slinging a spell, what we already know is that Duke will take over as the leader in the Player of the Year race and, probably, in the rankings as well. That's big game.

It's difficult to believe, given his stature in the game and success over the last few years, but this is actually Duke's first ever Pro Tour Top 8. Not that you'd know from the way he prepares. As other players were elsewhere waiting for their rounds to begin or mentally preparing themselves, Duke was battling, running games against teammates who were more than willing to help test.

On the other end of the spectrum is Yuuki Ichikawa, a PTQ player with 12 lifetime Pro Points also playing in his first Pro Tour Top 8, and just his third Pro Tour overall. He earns two invites to Pro Tours simply by making it this far – thanks to his new-found Silver Pro Club status – but making it all the way to the finals would put him in a new stratosphere entirely.

This has easily become the match-up of Pro Tour Journey into Nyx.

On one side you have the established "best deck" prior to the tournament: Red-Green Elspeth. This Naya-flavored deck packs a punch at every stage, playing many of the format's best proactive cards and getting them out quickly with several mana creatures early on. Between Stormbreath Dragon, Polukranos, World Eater, Elspeth, Sun's Champion, and Xenagos, the Reveler, the deck has no shortage of big plays to go around.

On the other side, in a match-up most pros this weekend felt was about even, is BUG Control, a new addition to the format with Journey into Nyx that ekes out gradual advantages over the course of the game with planeswalkers, Prognostic Sphinx, and Courser of Kruphix. It has been the deck of the tournament so far, with three similar copies in the Top 8 and a ton more doing well over the course of the weekend. 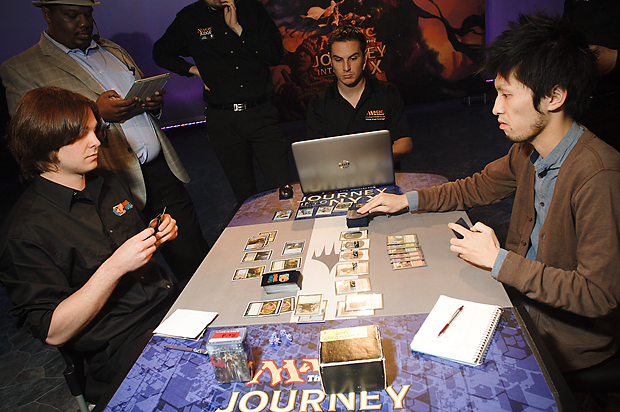 While No. 2 Ranked Player Reid Duke was on the hunt for his first Pro Tour title in his first Pro Tour Top 8, relative newcomer Ichikawa was looking to go beyond the Silver Pro status that he locked up with his Sunday appearance.

And it was about as close a match-up as two decks could get.

Ichikawa kept a hand without much early action, but with plenty of late-game power. It showed, too, as Duke was able to set up his early defenses without having to dance around any threats or expend many resources. His Caryatid into Courser of Kruphix draw was precisely what his deck wanted to do.

Ichikawa, meanwhile, drew nothing but lands for the first three turns, and his first play was a Banishing Light on Courser of Kruphix just to keep pace. A second Banishing Light then took out Duke's Polukranos, World Eater.

The wheels really started to turn when Ichikawa resolved Ajani, Mentor of Heroes and pocketed a Courser of Kruphix for his troubles. Ajani could lead to a ton of card advantage down the road, so Duke had to come up with something, especially when Ichikawa threw down an Elspeth, Sun's Champion the following turn. 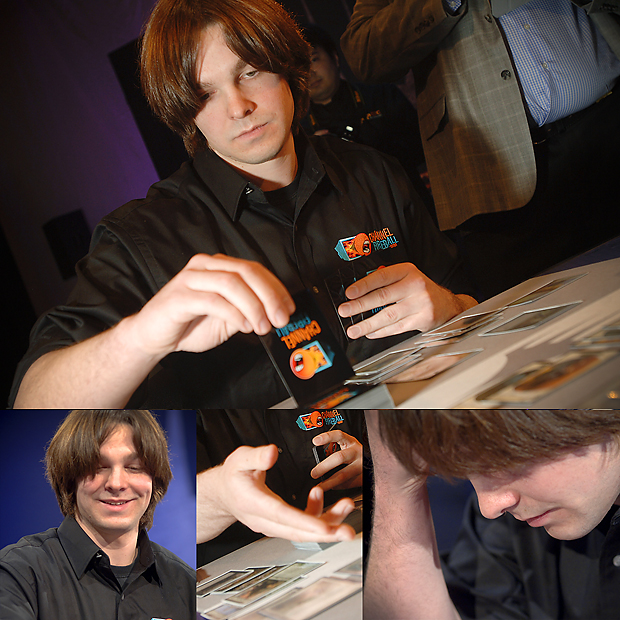 That something was a Prognostic Sphinx to start. It was a promising start, but facing two planeswalkers that could put a ton of pressure on Duke on their own, let alone together, Duke would need to find some more immediate answers sooner rather than later. Duke scryed and scryed and drew on his next turn, but failed to find a Hero's Downfall that turn. Or the next. Or the one after that.

What he did find was a Bile Blight to take out the horde of now 3/3 soldier tokens running his way. Ichikawa made more tokens, but lost the Elspeth on the next scry-fueled attack only to replace it on the following turn. For every threat that fell, two took its place.

So, Ichikawa was basically The Hydra in this match.

Every time it seemed Duke was set to recover, Ichikawa found another way to keep him on the back foot. Two creatures went down, a planeswalker popped up. One Courser was silenced (courtesy of Silence the Believers), another found its way into play. One Elspeth was attacked down, another was flipped to the top of Ichikawa's library. Duke went through two Silence the Believers and a Bile Blight and was still way, way behind on the board. Ichikawa's advantage from his planeswalkers was widening the gap between the two decks every turn, and there seemed to be little Duke could do as he lost ground every turn.

Duke held out as long as he could, but there was only so much one man could do against a whole squad of planeswalkers.

And, as it turned out, there was less he could do against his own deck. Two straight bad hands sent him down to five cards in the second game. Ichikawa kept a relatively weak hand of five lands and two mana accelerators, counting on his deck to deliver the goods. Duke would need him to miss for a few turns to have a chance. 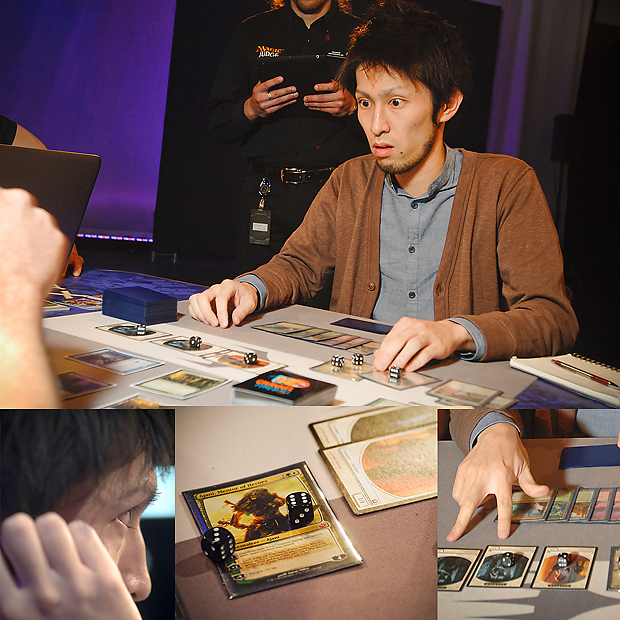 Ichikawa's Red-Green Elspeth deck is capable of delivering one huge threat after another.

The fates, however, were with Ichikawa, as Xenagos, the Reveler quickly found his way onto the battlefield on the third turn, immediately sending in a satyr to do its dirty work. Polukranos, World Eater joined them the following turn. The turn after that? Stormbreath Dragon.

Suffice to say, Ichikawa had drawn precisely the kind of pressure he needed.

Penned in by mulligans, missed land drops and an explosive start from Ichikawa, there was nothing Duke could do. His first Pro Tour Top 8 was over. 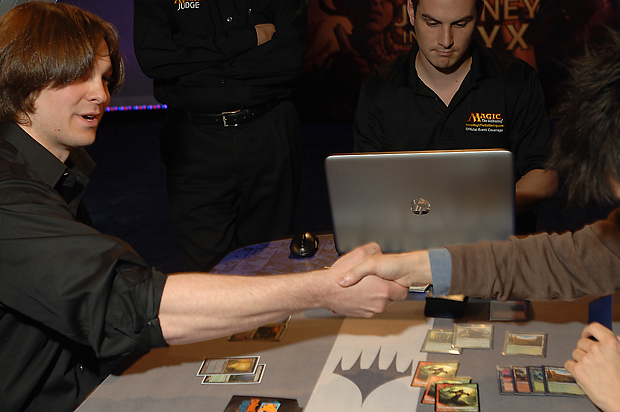 Ichikawa's, however, had just begun.

Yuuki Ichikawa defeats Reid Duke 2-0 and advances to the Semifinals!