This quarterfinal matchup pits Pro Tour Champion Mike Pustilnik (#6 after Swiss) against local hero Shannon Krumick (#3). "Dr. P", as he is often called on the Pro Tour, is playing a Green/Black deck popularized by Sol Malka at Pro Tour New Orleans as well as last season's World Championships. The deck has been enjoying a real rise in popularity in the last couple weeks, and seems to do an excellent job of straddling an environment which sports such an incredible diversity of deck styles. 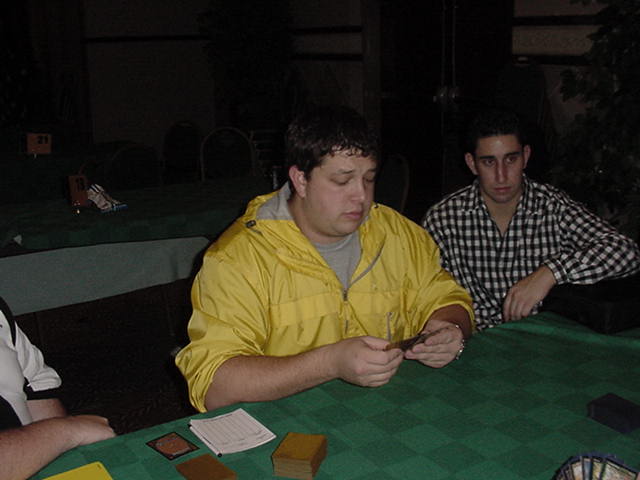 Krumick is running the latest incarnation of the popular "PT Junk" archetype. This deck is Green/Black/White, and boasts an excellent creature array (including Call of the Herd, Boas, Lynx, Mongers) backed up by Swords, Gerrard's Verdict, Deed, and Tithe.

Though the players have not played each other this weekend, Pustilnik lost in Round 10 to a similar deck piloted by Kaare Anderson, who went on to win the Swiss portion of the event. Despite this, Pustilnik felt that he had a significant edge in the matchup, particularly after sideboard, when he would be adding three Diabolic Edicts, Massacre, Volrath's Stronghold, Stench of Evil, and an additional Dust Bowl.

Pustilnik won the roll and, after some deliberating, decided to draw first. The extra card paid off when he was forced to mulligan his initial hand, which had no green mana. His second hand was far better, and saw a turn 3 Yavimaya Elder, a card that can really make a difference in this battle of resource exhaustion. Krumick missed his 3rd land drop, and Pustilnik furthered the problem by playing and using a Dust Bowl to bring his opponent's mana base down to just a Treetop Village, which soon found itself in the graveyard as well. A second Village came down next turn for Krumick, but that too fell to Pustilnik's Dustbowl, which was amply supplied with fodder lands via the sacrifice of his Elder. Krumick managed to get out of the immediate situation by playing a Scrubland and Tithing in response to the Dustbowl, and then playing a Wasteland next turn to take it out, but the difference in development between the two sides was dramatic: Pustilnik had 4 lands (including 2 Treetop Villages) and a Weaver to Krumick's one land. On the next turn a Phyrexian Plaguelord joined the party on Pustilnik's side of the table, and Krumick conceded after his next turn, unable to halt the avalanche of damage aimed at his face. 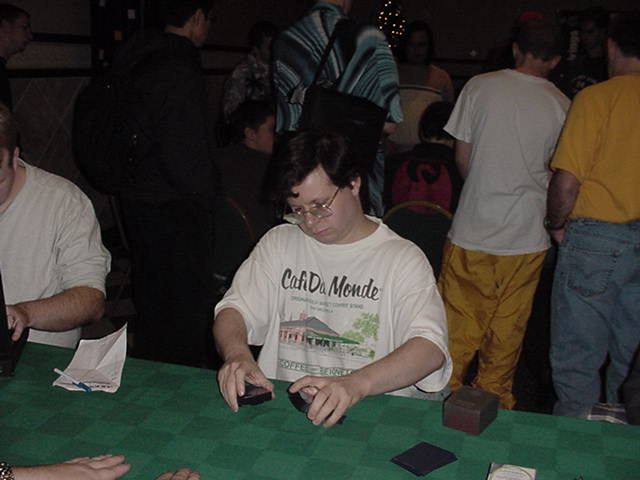 Game 2 opened with a Duress on Krumick, who also chose to draw first, revealing 3 land, Tithe, Lynx, Verdict, and River Boa. Unfortunately for Krumick, none of the lands were white-producing, so the hand looked to be fairly mediocre. However, he was able to get the white land he needed turn 1, allowing him to play out his Lynx and then Tithe for two lands on his third turn. Free land was the order of the day on both sides though, as Pustilnik played out an Elder, which was able to sacrifice for a card and two much needed land. With a Feeder and Bird against Lynx, Village and Boa, Pustilnik was lagging in the life race, but his hand of three Spiritmongers looked it might be able to buy him the time he needed.

The first Monger met with Swords to Plowshares, but the second had the benefit of arriving under the cover of a Duress. Krumick's hand was revealed to contain 2 lands, a Ground Seal, and the Verdict which ended up being discarded. Things were looking rough for Krumick at this point, but his next two turns saw him play his own Spiritmonger and then a second Lynx, giving him an attacking force of four regenerators. A second Monger on Pustilnik's side made it too costly for Krumick to risk an attack, and suddenly the game was in balance.

Krumick came out of it better though, playing out Villages #2 and #3, and then a Call of the Herd with Flashback. A Stench of Evil reduced the amount of mana that Krumick had to activate his Villages, but Krumick was still able to Swords one of the opposing Spiritmongers and serve with his Noah's Arc of 2 Lynx, 2 Elephant, and 2 Villages, led by his own Spiritmonger. The attack brought Pustilnik from 18 to 8, and threatened to put him away if he didn't draw something capable of equalizing the drastic disparity in forces.

And then Pustilnik drew a Plaguelord, which enabled him to survive the next brawling attack phase while taking out the remaining two Villages. The Plaguelord soon removed all of the Lynxes as well, one of which was by sacrificing an Elder, giving Pustilnik 3 for 1 card advantage. Amazingly, Shannon was now on the defensive, and was forced to set off a Deed. When the smoke had cleared the only true creature left standing was Pustilnik's 8/8 Spiritmonger, backed up by a Treetop Village. In the absence of a badly needed 3rd Swords to Plowshares there just wasn't any answer to the 8/8 Beast, and the game ended in Pustilnik's favor very shortly thereafter. By the end of the game quite a crowd had gathered, and many present agreed that the dramatic comeback had been one of the better games witnessed this weekend.