We all had a nice chat before the game while they were being deck checked. Michel attends college at Unicamp and thought hard about giving up Magic after Brazilian Nationals to have more time to study. This is his first major achievement and he's playing for amateur prizes.

Caligaris on the other hand is thinking of delaying college for a year to fully dedicate himself to playing magic. He finished third at Argentinean Nationals this year and before that got a top32 at extended GP Buenos Aires. The nineteen-year-old Argentinean is playing Psychatog with main deck Wishes while the 20-year-old Brazilian is playing the Red splashed Opposition deck that won USA nationals with main deck Spellbane Centaurs.

After Gabriel won the die roll the game started with a mulligan from Michel. The pace of the game was very slow as a second turn Elf was Edicted and the following play came only on the Brazilian's fourth turn.

A Wild Mongrel was answered with Fact or Fiction (he took Upheaval and Chainer´s Edict over two lands) and then hit play only to get Edicted on Caligaris' turn. A Spellbane came into play on Michel's side and was answered by a Deep Analysis on the next turn. A hit from the blue-hating creature later, the game's first blood, Gabriel flashed back his deep before playing Nightscape Familiar followed by the toothiest grin on this side of the earth.

On his turn Shirozono tried to catch up with all the card drawing his opponent was doing by playing a Deep Analysis of his own. Caligaris answered it with a Force Spike to tap Shirozono out, letting the spell resolve.

The following turn was a huge one with tog hitting for three, evening the life score, before Upheaval was played with Blue and Black floating. An extra land brought Tog right back down earning a concession from the Brazilian. 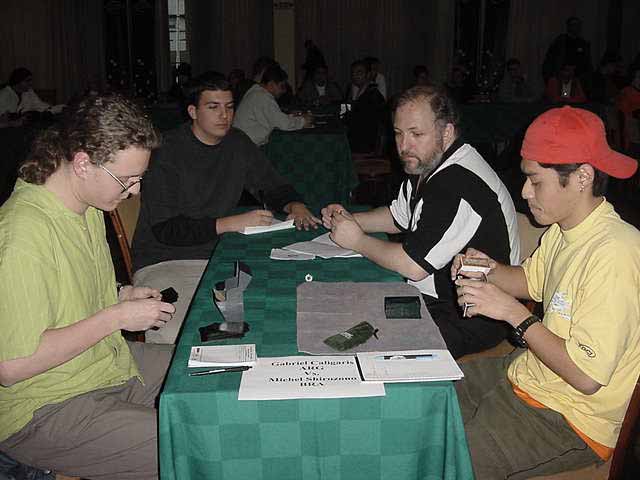 Sideboarding is an art.Caligaris:
In: 4 Ghastly Demise, 2 Duress.
Out: 4 Force Spike, 2 Chainer's Edict.

Both players kept their hand and the first action happened when a Merfolk Looter hit play uncontested. After Caligaris played his third Salt Marsh in a row Shirozono Looted and Iced one of his land at the end of turn. This allowed him to sneak in Opposition. Caligaris didn't have one of his remaining Force Spikes so it hit play.

After having a land locked on his upkeep the Tog player went for it and played his fattest creature. Unfortunately for him his opponent did quite the same when he dropped a game-breaking Flametongue Kavu targeting the smiley creature. This forced a two-card discard and their following removal of the game just to keep Psychatog on the table.

On the next upkeep Shirozono locked two of his opponent's lands with Looter and a freshly casted Birds. Caligaris floated mana and after his draw played Fact or Fiction, taking Ghastly Demise, Nightscape Familiar and Circular Logic over Upheaval and land.

Soon after the Tog entered the Red Zone as Shirozono declined tapping it, and was blocked by Flametongue Kavu, which seemed to be a mistake on the Brazilian side, even thogh Caligaris was forced to discard two more cards to prevent the trade.

After some uninspiring turns where some creatures were played just to be demised on the next one we got some action again when a counter war ensued over Spellbane Centaur, leaving it off the table and both players' hands almost empty.

Shirozono's two cards in hand were not enough as Caligaris showed him that he was not out of gas yet, when he played an upheaval with two Blue and two Black on pool. Shirozono's tricky answer of floating double Blue forced the Argentinean to review his notes (Mongrel and Opposition in hand) before he dropped the dynamic duo of Familiar and Psychatog.