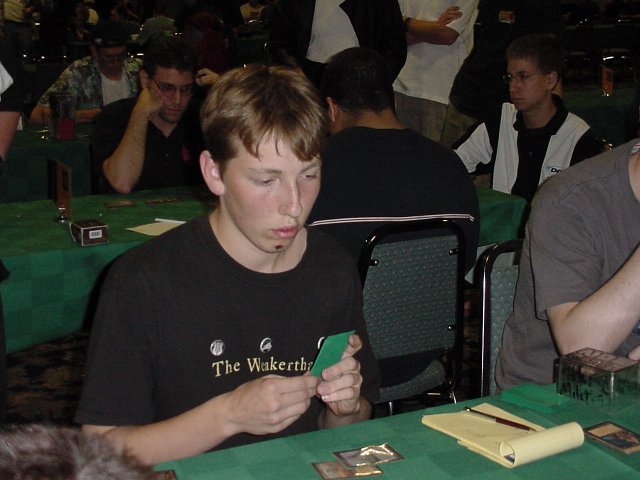 After 13 grueling rounds of Invasion Block Constructed action, Mike Abraham and Brett Shears found themselves facing each other in the first round of the top 8. Mike is also one of two amateur players still playing. In addition to the main event prize money, he also could win $1,500 for being the top amateur of the tournament. (The other top 8 competitor with no Pro Tour points is Aaron Kroblock.)

Brett Shears, from Los Angeles, California was with Kowal.dec. This Green/Blue/Black deck was first used by Brian Kowal to win a PTQ Origins. This design featured Vodalian Zombies, Plague Spitters, Mystic Snakes and Spiritmongers. Brett backed this up with Undermine, Exclude, Spite/Malice and Repulse. Fact or Fiction and Pernicious Deed provide additional card advantage. Brett was wearing a black T-shirt, blue jeans and a silver watch for texture.

Mike Abraham is a high school senior from Mankato, Minnesota. This was his first Grand Prix and so far he had lost only one round. He was playing Weil Fires. This Blue/Green/Red deck used aggressive creatures in Kavu Titan, Gaea's Skyfolk, and the rarely seen Penumbra Bobcat. Mystic Snakes and Flametongue Kavus rounded out his offense. Mike also used Repulse, Fire/Ice, Prophetic Bolt and Breath of Darigaaz to clear the way. Finally, four Fact or Fictions seemed to be a standard inclusion in most IBC decks. Only one player in the top 8 did not use at least 3 of the broken instant. It should be noted that this author also chose to play Weil Fires, but to a considerably worse finish. Mike was wearing a black shirt with blue corduroy cargo pants. He also wore three buttons along his chest, but no other accessories.

The players shuffled up and Mike won the die roll and chose to play. An interesting fact of this Grand Prix was that no player who chose to draw first made top 8, or in fact won a game. Mike started things off with a turn 2 Titan. Brett countered with a Turn 2 Vodalian Zombie. On his turn, Mike Repulsed the zombie and attacked. Brett laid a land and recast the Zombie. This was exactly what Mike wanted to happen as he laid his 4th land and cast Flametongue Kavu, killing the Zombie and allowing another attack. Brett, perhaps fearing a Snake, main phased a Malice and killed the Flametongue. Mike played nothing on his 5th turn and attacked Brett down to 14. Brett dropped another Vodalian Zombie, which resolved. Mike played his 6th land attempts to Fire the Zombie. Brett Undermines and Mike Snakes it. Dead zombie and the relentless Titan attacked again. Mike being tapped out, Brett decided to cast a Spiritmonger regnen mana open. Mike played nothing on his turn. Brett pondered and decided to go agro, bringing Mike down to 12. Mike swung back to get Brett to 7, then cast a Penumbra Bobcat. End step Fact or Fiction created a Mystic Snake war, which Brett won. He gained a land and Pernicious Deed over 2 lands and another Fact. On Brett's turn, he "shipped the stew" and attacks with all his creatures. Mike makes an odd choice and blocks the Snake with his Bobcat and took the Spiritmonger. After the dust settles and tokens were created, Mike found himself at 4 life with Brett still at 7. Brett then cast his Pernicious and used it for 4, wiping Mike's board, then dropped a Plague Spitter leaving him tapped out with one card in his hand. Mike made his big mistake here, waiting until Brett untapped to cast Prophetic Bolt, at Brett's face. Brett used his last card in hand to Repulse the Spitter and drew Mystic Snake earning Mike's concession.

Both players brought in their 4 Gainsays, which again seven of the top eight were using. Mike also sided in Excludes, and Brett his 4th Pernicious Deed. 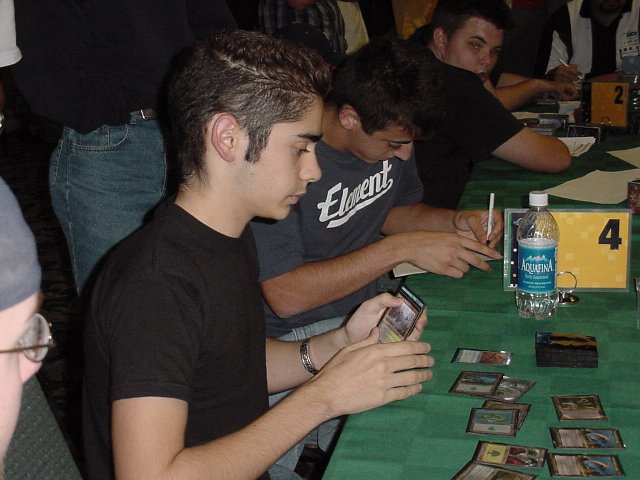 Mike started off poorly in Game 2 with a mulligan and chose to keep his 6 card, one land draw. Mike then proceeded to miss three land drops. Brett put him out of his misery fast with Vodalian Zombies and a Spiritmonger. On turn seven, Mike conceded having found his 2nd land pathetically too late.

Brett Shears advances to the semifinals 2-0