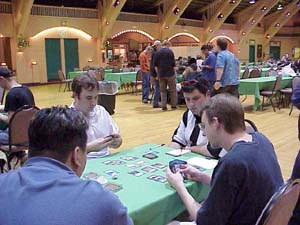 Adam Racht vs. Mike Emmert This top 8 feature match pitted two relative unknowns to the Pro Tour scene. Mike Emmert is one of Maine's finest recently winning the Maine States, and frequently mentioned in the ranting of John Rizzo. Adam Racht came into the top eight as the top amateur, and was guaranteed $2,300 already. Racht drafted a black blue deck with Sengir Vampire and Cultural Exchange as his bombs. Emmert on the other hand had no true bomb cards but his deck was chock full of quality stars such as two Mystic Zealots, two Resilient Wanderers, two Shelters and a Hypochondria.

Emmert came out with the fast with Patrol Hound, Think Tank, and Resilient Wanderer through the first four turns. Unfortunately for him, Racht dropped a turn three Cephalid Looter which Emmert could just not deal with. Racht's board was looking good when a pair of Dirty Wererats followed up the Looter. Emmert's intuition was looking good as he played his main deck Pilgrim of Virtue to stop the attack. Racht Diabolic Tutored for his Sengir and the game was again looking bad for Emmert. 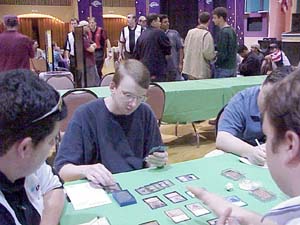 Adam Racht A second Resilient Wanderer hit the board for Emmert and they were able to go on the offensive when threshold was hit, and the Wererats were no longer able to block. Emmert attempts to relieve the vampire problem by making him have Second Thoughts but an Aether Burst changed his mind. The Vampire came back that same turn and the race was on for damage. A few more creatures hit play on both sides and the game looked locked up for Racht when he dropped a Scrivener. Unfortunately his inability to understand how a Pilgrim works made him choose a Rites of Refusal over the Aether Burst. Racht sent all of his men into the red zone and was able to stack lethal damage. Emmert however knows what his Pilgrim does and sacrifices to avoid dying and is able to swing with his remaining creatures for the win on the next turn.

While the two were side boarding I asked them about any major accomplishments that they both had. Racht said he had none but then proceeded to comment " I think my mistake there was an accomplishment"

Emmert started off the game with a Peek and saw 2 Dirty Wererats, Zombie Assassin, Scrivener and Cultural Exchange as Racht's spells. Emmert hoped that a fourth land wouldn't come as the game could easily get out of hand if it did. The land did come and the Wererat that was summoned on turn 4 was matched by a Resilient Wanderer. A Strength of Lunacy on the rat made it a big problem and the damage race had begun. A second Wanderer came down but they were soon staring at the second rat. Knowing that he had to race at this point, both Wanderers got Protection from Black with a land and a Mystic Familiar being discarded to do deal four. 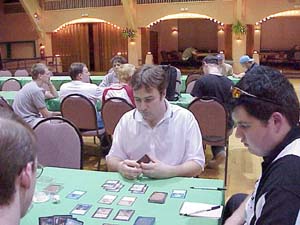 Mike EmmertThe turning point of the game came as Adam left 5 mana open and passed the turn. The Wererats showed no fear of a Second Thoughts and came across to deal 6. Emmert showed that he was not a bluffer and sent the rat to a happier place. Racht was still winning the race with the 4/4 Wererat, but was unable to cast any creatures that could block the Wanderer's effectively. The 2 Wanderers just kept coming across for 4 a turn and a Cephalid Sage finally came to play for Adam. A Shelter was used to keep the Sage around for a while as a blocker for the large rat, and the Wanderers just kept bring the beats. An Aven Cloudchaser finally showed up and took care of the Lunacy and all of Racht's hopes.

Racht didn't seem too displeased with his performance this weekend as he will make as much almost as much as the eventual winner of the event. Emmert now goes on to face Jeff Cunningham and his red-green deck in the semis.