oes the user name "nsw" mean anything to you? If you play Magic Online then you might know that nsw is firmly on top of the Constructed leaderboard, a player that consistently racks up wins across the digital realm. What team MTG Mint Card didn't know when they invited Grand Prix Melbourne champion Nam Sung Wook to the team was that he and nsw were one in the same.

In hindsight, Nam Sung Wook abbreviating to nsw seems obvious. Not only did the team bring on a top competitor from their geography but tapped into the talent and skill of one of the best Magic Online players. Carrying the Junk Constellation deck to his team's best place of the weekend – Top 8, and potentially better – meant the translation of digital-to-paper skill was on display at the Pro Tour yet again.

With play capability among the greatest in the digital world what force could stop it?

According to him, luck had been on Andrea Mengucci's side throughout the weekend. A mainstay of the feature match arena through dominance of the King of the Hill throne on Day One, Mengucci maintained his power and prowess on Day Two to steal back the title for a round and earn his first Pro Tour Top 8. His R/G Elspeth deck was a Magic Online Theros Block Constructed deck – something Nam surely saw and prepared for in testing – and Mengucci wasn't thrilled about facing decks that weren't the same as his: It had been mirror matches in the Constructed rounds where he found the greatest success. 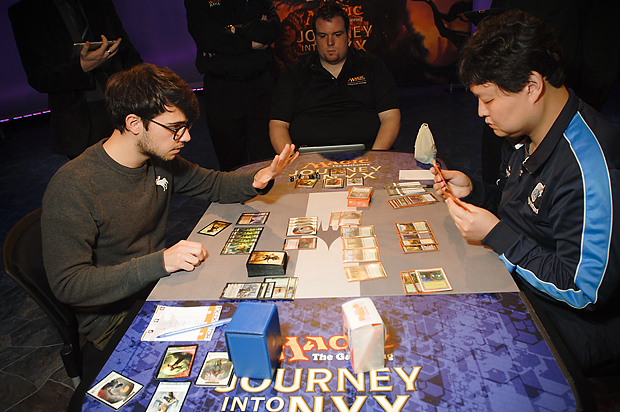 While the match-up appeared to be between two players with little Pro Tour experience, both have been turning heads all weekend. Andrea Mengucci has been at the top of the standings all weekend, while Nam Sung Wook recently eon a Grand Prix and has been a mainstay on Magic Online as "nsw".

But like the story had been so far, being on the side of luck can mean a lot. Had Mengucci's finally run out? Nam intended to find out.

Like many of the midrange clashes throughout the weekend, the early turns of the first game were spent developing mana bases and acceleration. The one-two punch of Sylvan Caryatid and Courser of Kruphix was exactly how Nam wanted things to begin, allowing him to play both Eidolon of Blossoms and Thoughtseize on his fourth turn.

But that all still left Mengucci with enough to cast the Elspeth, Sun's Champion that remained behind.

While Nam drew plenty of cards – lands, mostly – from the pair of Eidolon of Blossoms he ended up with, Mengucci's production of 1/1 Soldiers was the real danger. Sending everything into Elspeth, Nam forced Mengucci to block with all of his army, which were just replenished the next turn.

Silence the Believers finally cleared the way for Nam, and playing two copies of Brain Maggot let him dig to Hero's Downfall to end Elspeth's aid. Stormbreath Dragon wasn't an exact replacement, but it was a way for Mengucci to race with the few soldiers still left blocking for him. 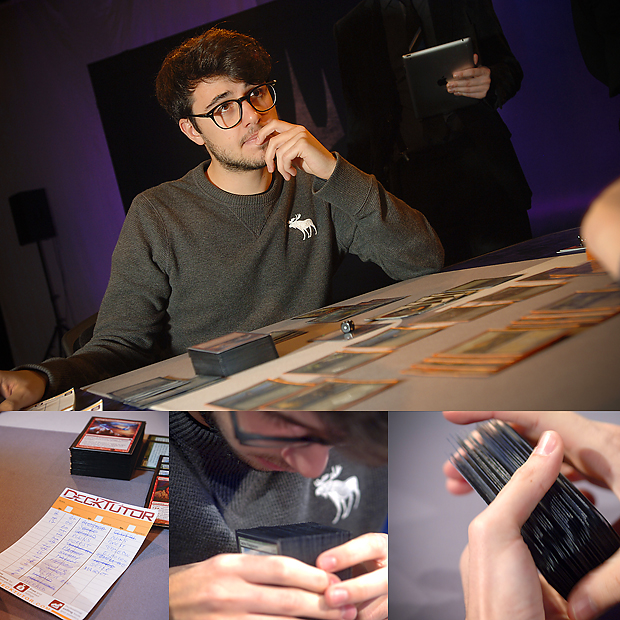 Mengucci's R/G Elspeth packs a powerful one-two punch of planeswalkers as well as some serious monsters such as Stormbreath Dragon.

Going monstrous, the Dragon pounded for two turns before bestowing Herald of Torment led to Nam drawing and casting his second, stabilizing him at 6 life with seven flying power to block with.

Lightning Strike was poised on top of Mengucci's library to change that.

Elspeth, Sun's Champion's minus-three loyalty ability dealt with the dragon for Nam, but when Mengucci untapped he drew the Lightning Strike to reveal another behind it.

Despite digging with all his deck's might on his turn – desperately looking for his other copy of Silence the Believers - Nam grimaced as had run out of time.

Nam nodded as he began sideboarding. The process didn't take long as each player had their plans in mind already.

The second game began in a different way, and proceeded much faster. Nam played Fleecemane Lion into a Thoughtseize to take away one of the two Stormbreath Dragons in Mengucci's hand – and peek at a wall of removal in waiting.

It's important to note that he only had Sylvan Caryatid to produce white mana and was without a land in hand. 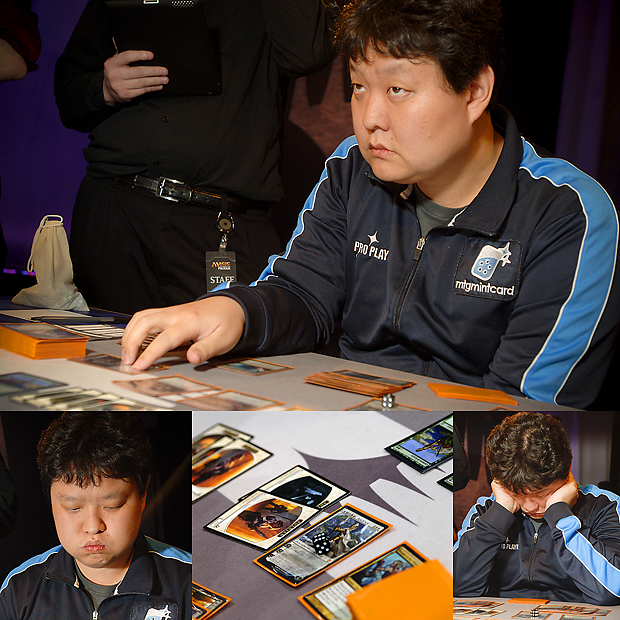 Nam's Constellation deck is capable of a ton of card advantage courtesy of Courser of Kruphix and Eidolon of Blossoms.

Stormbreath Dragon took over dishing duties for Mengucci when Nam played Reaper of the Wilds, but neither were long for the battlefield: Nam used his own Elspeth, Sun's Champion and slayed both of Mengucci's monsters. When Destructive Revelry's damage was redirected to defeat Nam's Elspeth, the Korean just replaced it with another to begin amassing an army.

Without finding a second source of white mana, another turn and it was more than Mengucci could handle.

The final game was a war of recovery: Both players slipped on finding mana and came down to who recovered better. Nam's Thoughtseize plucked one of his two copies of Xenagos, the Reveler from Mengucci's hand, leaving him with plenty of monsters but short the mana to cast them aggressively. A second Thoughtseize stole the second Xenagos, and Mengucci's Courser of Kruphix showed mana wasn't on the way next turn either. Reaper of the Wilds was the first threat Nam could play – two or three turns late – but it went to work immediately.

Eventually, Mengucci found the mana he needed. Stormbreath Dragon tried to barrel in, but Hero's Downfall stopped it. A second Dragon was allowed one shot before a second Hero's Downfall hit.

Racing back all the while with Reaper of the Wilds let Nam take the lead on damage, setting up Fleecemane Lion – monstrosity at ready – as lethal apparent.

Revealing two copies of Banishing Light and a Glare of Heresy that wouldn't be enough to stop Nam's deadly force, Mengucci extended his hand.

His luck, it seemed, had finally run out. 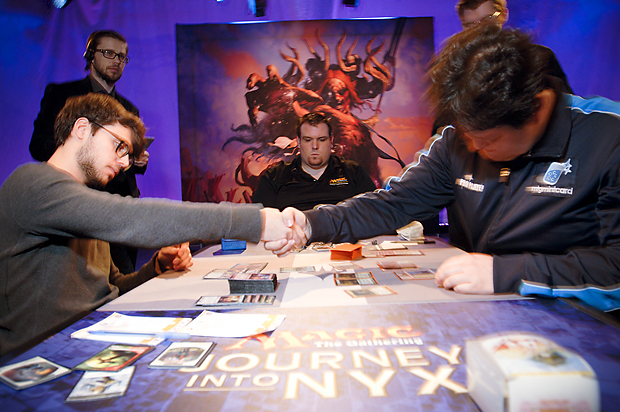 Nam continues to show just how much of a magical force he is, a mere two wins away from locking up a Pro Tour victory.