Mori calmly sat cross-legged on his chair as this Quarterfinal match was about to start. Twelve months ago he had been in a similar position, and in a year where Japan dominated the Worlds competition, he had been the player to lift the trophy as World Champion. Faced with the prospect of an incredible repeat, the Japanese pro was a picture of calm. He had been here before, and knew what to do. 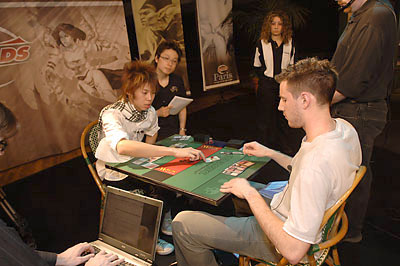 Nick Lovett, of Wales, is somewhat less used to playing Magic on the international stage. Currently still a student, he came to the World Championships as a rookie on a tight budget with the Welsh National Team, prepared to have a good time and enjoy the chance to play against some of the best in the world. After rattling off an undefeated run in Standard, he battled through a day of food poisoning on draft day with a 3-3 finish, and then got back into his groove for Extended, where with 4 wins and 2 draws, he locked things up for Top 8. Given that he was undefeated in Constructed on the weekend and that this match was with his 6-0 Boros deck, he had the right format for this Top 8.

Before the match, Nick joked that he is having one day on, one day off this tournament. Both the draft day and his personal performance in the team competition yesterday were not his finest, while he had put out a very strong showing on Wednesday and Friday. He was clearly hoping that his run of not losing a constructed match would continue just a little bit longer.

Nick led off with a quick Plains and a Savannah Lions and started attacking from turn two, while Mori could only initially build his mana base. A Knight of the Holy Nimbus joined the team for Lovett, who pushed ahead in the damage race, aided by Mori having only an Adarkar Wastes as a blue source. When he played an Azorius Signet on turn three, Mori was already facing down an attack to put him to just 9 life.

From here, Mori began to take control. His Wrath of God bought some time, though it did drop him to 8 life. With two Urza's Towers and an Urza's Mine, the full Tron was not set up, but the World Champion had bought himself a little time.

Lovett tried to keep the pressure on, playing a Wildfire Emissary, while Mori tried to find the right answers with Compulsive Research, discarding Adarkar Wastes. Mori found the final part of his Tron, played a Dimir Signet, and dug again with a second Research. With just an Urza's Power Plant untapped, Nick would have another turn in which to get in some damage.

The Welshman calmly attacked with his Wildfire Emissary, and played a Volcanic Hammer, taking Mori to a precarious 3, and followed up with Ronom Unicorn. Even though it was Mori who was under immense pressure, it was Lovett who looked a little nervous.

Mori untapped, flashed back Think Twice, saw that he could not stop himself from taking the remaining 3 from attacks and scooped them up.

After playing his first land, Mori for the first time in the match performed his now-trademark 'face slap' to wake himself up. His mana was looking a lot more solid this game, in the form of Hallowed Fountains, and he managed to stem the early tide from Lovett (which came from two copies of Knight of the Holy Nimbus) with a turn-four Wrath of God.

With Mori tapped out, Lovett played another threat in the form of Soltari Priest, and then snuck out a Volcanic Hammer, knowing that he needed to push the pace of the game. Mori built his manabase and waited.

Soltari Priest's first swing took Mori down to 13, but by this point Katsuhiro had 3 Hallowed Fountains, an Urza's Mine, an Island, and an Azorius Signet. Mori used a second Wrath of God to take out the Priest but dropped to 10 from an end-of-turn Lightning Helix.

Seeing that this first burn spell had got through, Lovett pushed for more. A Char got hit by Remand, but then came out again to take Mori down to just 10. At this point, though, Katsuhiro dropped a potential bomb in the form of Circle of Protection: Red. Lovett's options on damage were now slightly more limited.

Nick played an Icatian Javelineers and passed. Upon hearing that his opponent still had 3 cards in hand, he couldn't help but sigh. On his next turn the Javelineers were ambushed by Teferi, Mage of Zhalfir. Nick tried to Helix the legend, who had one damage on him, but was thwarted by Spell Snare. It took a Rift Bolt to finally finish Teferi off. 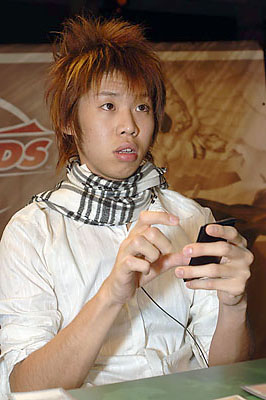 From here, the game slowed to draw-go, with Nick desperately looking for white damage sources. Unfortunately for him, the long game massively favoured Mori, who dropped an Urza's Factory into play - a card that in Nick's testing of the match had proved something of a nightmare.

Nick played an Icatian Javelineers and Magus of the Scroll, but when Mori made an Assembly Worker token with his land (represented by former World Champion Julien Nuijten), he looked in a lot of trouble.

This token attacked and was then hit, along with every other creature on the board, by Wrath of God. Lovett was up 16 life to 6, but looked likely to have a little trouble doing those final points. When he tried for Wildfire Emissary, it hit a Remand, and Nick chose not to replay it.

Mori had a creature of his own in the form of Triskelavus and was, for the first time in the match, on the offensive. Nick did get his Wildfire Emissary, but while the Circle of Protection: Red was on the board, it seemed little more than a blocker. Triskelavus could not be blocked by the timeshifted red card, but Rift Bolt did take it down, changing the big flyer into three little flyers. Mori made an Assembly worker, and on his turn had his first Faith's Fetters of the match, to take himself up to 10. Following attacks by Mori, the life totals were 10 to 9 in the World Champion's favour.

A Soltari Priest effectively traded with one token, but Lovett could see the writing on the wall, and scooped his cards up in the face of lethal attacks.

On the play, Lovett had Savannah Lions for turn two - and indeed a second for turn two, though at the expense of not having a second land drop. This seemed a risky gamble for Lovett, but when he had an Icatian Javelineers too on turn three, it looked that it might have been worth it, as his deck really needed to be about the early game. The Javelineers got hit by Remand, but the Welshman smiled and played a Sacred Foundry to allow the little white Mogg Fanatic in.

Relentless attacks from Lovett had taken Mori down to 9 before he made any play. With an Urza's Mine, Urza's Power Plant and Island, Nick could feel fairly safe from a Wrath of God. Mori played an Adarkar Wastes and a Dimir Signet and passed.

An end-of-turn Lightning Helix was countered by Mori, who went down to 3 following attacks. Nick then passed. Upon his draw, Katsuhiro looked visibly shaken for the first time in the match. He played a Faith's Fetters on Savannah Lions, effectively buying a turn, and had a Spell Snare for Lovett's Lightning Helix.

The turn he bought looked pretty good, as Mori got to play a Triskelavus that could really swing things if the Champion could just untap. Mori held his breath as Nick commenced his turn. As soon as Nick played a land and started tapping for mana, Mori moved to scoop his cards… when the Char that had been in the Welshman's hand since the start of the game came down, the game was over.

On the draw, Lovett had the first play of the match, the Savannah Lions that had served him so well in Games 1 and 3. It was followed up by Icatian Javelineers, which was Remanded only to be replayed off a Battlefield Forge.

Mori's first three lands had been Hallowed Fountain, Urza's Factory and Academy Ruins - not the ideal start. He played a Compulsive Research and, tellingly, chose not to discard any. When Lovett hit Mori's Hallowed Fountain with Stone Rain, it seemed potentially game-breaking. An Adarkar Wastes and Azorius Signet from Mori brought him back in it, but all the time Mori was taking damage from those Lions and Javelineers.

Mori had a long think on his turn, and played a Faith's Fetters on Savannah Lions to bring him back up to 14. This did not last long, though, as an end-of-turn Char took him right back down again. A second Stone Rain came from Lovett, who still had 4 cards in hand.

Mori dug with Compulsive Research with a concerned look on his face. He had to discard Spell Snare and Triskelavus to the Research, but did have another land, albeit an Adarkar Wastes that would not help his life total. Mori played Spell Snare on Soltari Priest the following turn, but couldn't stop another Icatian Javelineers hitting the board.

With each passing second that Mori pondered his play in the match, it seemed that Lovett's t-shirt, with 'I'm entitled to be grumpy' written on it, was increasingly inaccurate. Katsuhiro played another Compulsive Research, leaving just his Adarkar Wastes up. He discarded a 'tron piece to his research, but had another one (Urza's Tower) to play. 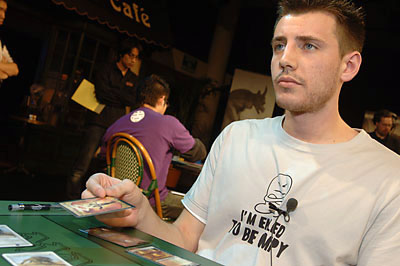 Lovett came into this match undefeated in Constructed on the weekend.

Lovett just kept piling on the pressure. A Volcanic Hammer only hit for 1 (from Adarkar Wastes) when it got Spell Snared, but Nick still seemed pretty happy. He was 6 damage away from defeating the World Champion.

Yet another Compulsive Research came from Mori, who was in desperate need of something special to stay in the match. After a little thought he discarded Teferi, Mage of Zhalfir and Remove Soul before playing an Urza's Power Plant, still one piece off his 'tron. He though long and hard before doing anything more. Tapping his Adarkar Wastes would leave him open to direct damage, and even if he played a Circle of Protection: Red, it could only effectively counter a single burn spell with the amount of mana he had up.

Mori drew a card and licked his lips. The Wrath of God had finally arrived. Lovett's response was Lightning Helix. This got Spell Bursted, and then Nick's monsters went in the bin. Mori was now down to 3 life from painland damage. This was exactly the amount that Lovett's final Lightning Helix dealt to finish things off.

Nick Lovett advances to the semifinals!