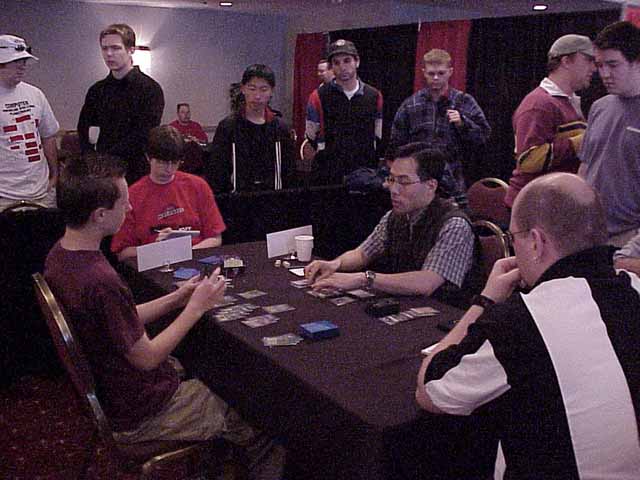 You could tell that this match didn't include any of the Pro Tour regulars in the Top 8 just from watching the pre-game shuffling. This is the 13 year old Murray Evans's first top-level tournament success (although he has done reasonably well at the JSS), and Sam Lau doesn't have Pro Tour experience. Unlike the more experienced players' rigorous shuffling of their opponents' decks, this match started out with a much more laid-back tone.

Murray Evans was playing one of the two Stompy decks in the field yesterday (the other was Ryan Fuller's, and he also made the Top 8). Stompy seemed to be a good call considering the large number of monoblue decks being played. Sam Lau was playing one of those accelerated blue decks, with Masticores and Grim Monoliths to get them out faster. 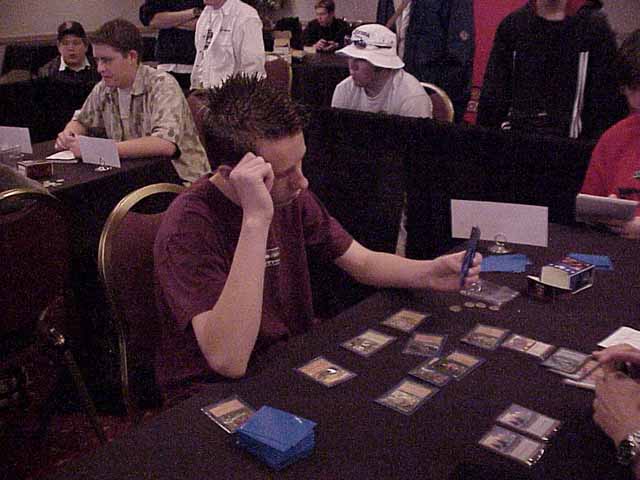 Murray Evans won the die roll and went first. He had a slow start, playing Treetop Villages on his first two turns (He's playing four Treetop Villages, compared to Ryan Fuller's two.) He also had a Pouncing Jaguar, but Lau got the start he was hoping for: second turn Grim Monolith, third turn Masticore. Evans got in six points of damage with small creatures and Rancor before Lau cleared the board by stealing a Rancored Pouncing Jaguar with Treachery and the shooting the rest of Evans's critters with Masticore. Evans got out a Tangle Wire, but Lau had enough permanents in play that he could still attack the next turn with Masticore . . . and then he played a Rishadan Port. For Murray, the overall effect was similar to playing Armageddon after his opponent had played an Ernham Djinn. Not good. Lau got in enough damage before Evans recovered that his Faerie Conclave could finish the game. Evans was a bit flustered by the end of this game -- he played Rancor on a just-summoned River Boa and then tried to attack with it on his last turn.

Between games, the players made small talk about their activities of the previous evening. Evans had played five games against a copy of Lau's deck, winning three of them. Lau took the night off and went to see the Canada Day fireworks. 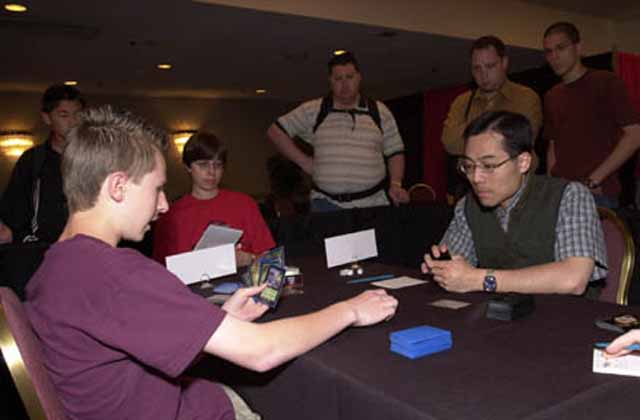 Evans went first in the second game, and put Lau on the defensive. Lau played Hibernation on Evans's fourth turn in response to a Rancor, but Evans's Gaea's Cradle let him replay both his creatures that turn. Lau looked like he might be able to get back into the game when he played a sixth-turn Masticore, leaving two islands untapped. Evans played Rancor on his Wild Dogs. Lau though for a few minutes before letting that resolve. He was at 9 life, facing two Wild Dogs and an Elvish Lyrist. He had to let the Rancor resolve so he wouldn't lose if Evans had a Giant Growth. Evans attacked with everything. Lau blocked the Wild Dogs without Rancor and asked if Evans had any effects. Evans played Giant Growth on his Rancored Wild Dogs! Lau thought long and hard, and then spent his last two mana to shoot the Dogs in response, knowing that Evans only had two copies of Giant Growth in his deck. Unfortunately for Lau, that Giant Growth was in Evans's hand, and the match was tied up at one game apiece.

The third game was really short. Evans mulliganed to six cards, but Lau didn't play lands on his third and fourth turns, and didn't have a Grim Monolith. Lau did cycle twice, but didn't get a fourth land and a Masticore in play until it was too late. 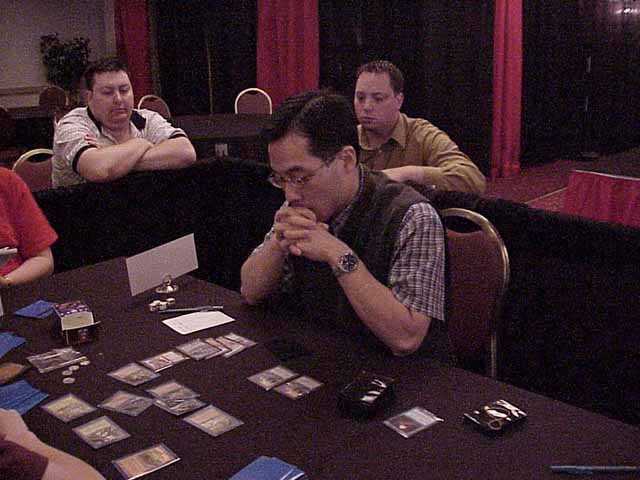 In the fourth game, Evans kept a one-land hand that would have been devastating if he were going first: it included a couple Elves, Wild Dogs, Hidden Gibbons, and Rancor. Unfortunately, he was going second. On his first three turns, Lau played Faerie Conclave, Powder Keg, and a Rishadan Port. By Evans's main phase on his fourth turn, he only had a tapped forest in play, and he'd taken one hit from his own Wild Dogs. Lau drew a second Port, and locked up the game while his Faerie Conclave served every turn. At 6 life, Evans conceded when Palinchron hit the table. He had only a forest and an inactive Hidden Gibbons in play.

The fifth game was a battle. Evans went first again. By Lau's third turn, Lau had two islands and a monolith in play, but he was already facing 7 damage a turn from River Boa, Wild Dogs, and Treetop Village (or 10 if Evans drew a land to activate the second Village). He though long and hard before playing a Rishadan Port and then tapping it and his Monolith to play Masticore, leaving two islands untapped. Evans attacked conservatively, only sending in the islandwalking Boa. He then played Gaea's Cradle and tapped out to play Hidden Gibbons and Blastoderm. Lau capitalized on that by shooting the River Boa at the end of Evans's turn.

Lau played an island and then thought some more. Evans had two cards in hand, and Lau had four mana untapped, so he said, "Go." Evans attacked with Blastoderm and the Wild Dogs, leaving his Treetop Villages back. Predictably, Lau blocked the Blastoderm, shot the Dogs, and regenerated his Masticore. With Lau tapped out, Evans then go to play a Saproling Burst. Lau holds on for seven turns just using the Masticore and his mana to, at first, hold off Evans's assault, and then to start attacking. Evans kept his Treetop Villages back the whole game, which seemed a bit odd. He was facing down a Powder Keg and two Rishadan Ports, but it looked like a few extra damage could be the difference in the match. All Evans was drawing was land.

Finally, Evans was at 8 life and Lau was at 6. Lau was discarding his one card turn to Masticore, so he didn't want to leave Evans time to recover. Evans had only a tapped Blastoderm, an inactive Hidden Gibbons, and a couple Treetop Villages that Lau could stop with his Ports. Lau attacked with the Masticore to drop Evans to 4, thinking that he'd just take a Blastoderm hit down to one on the next turn. After all, Blastoderm is untargetable, so Evans can't use Rancor or Giant Growth effects to get in that extra point of damage. Evans untapped, attacked with Blastoderm to put Lau at 1, and then played (drum roll here) RATH'S EDGE. (The one copy of the card in the deck, by the way.) That's the last point of damage Evans needed, and there's nothing Lau can do about it.

Next, Murray Evans will play #1 seed Gab Tsang in the semifinals, and Sam Lau will play in the losers' bracket.