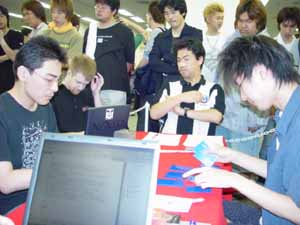 Without a doubt, Tooru Maegawa is playing the most interesting deck in the Top 8. It’s a Beast build with the usual assortment of Baloths and Contested Cliffs, but that’s where all comparisons end. Maegawa’s version has a strong combo plan built in, thanks to Verdant Succession. He can gain tons of life with Ravenous Baloth, and if Wirewood Savage is in play he’ll draw a card for each “cycle”. Of course, Aether Charge is the kill card, allowing Maegawa to deal four damage to his opponent with each combo cycle. With at least two different beasts, that’s more than enough damage to win the game. The deck can even work fine without the combo, as Wirewood Savage and Aether Charge may not always be optimal, but can provide the card advantage and/or damage necessary to win a game. Maegawa’s opponent, Nao Atsuta, is playing a fairly standard red/green deck. With Maegawa’s beasts and lifegain in the form of Ravenous Baloth, it’s going to be really hard for Atsuta to get the offense he needs to put Maegawa away, and even if he does get it going, the combo can rear its ugly head and change the game in the blink of an eye.

Maegawa mulliganed down to five, while Atsuta kept an opening draw of five lands, Firebolt and Blistering Firecat. Maegawa had Contested Cliffs, then played an Anurid Brushhopper, while Atsuta sent in a Blistering Firecat. Living Wish got Maegawa a Ravenous Baloth, which was the perfect card for the situation. Atsuta even played Rorix and attacked, but it became obvious that he couldn’t win a race when Maegawa played a second Baloth. After a great deal of thought, Atsuta sent Firebolt and Volcanic Hammer at one of the Baloths, and Maegawa was more than happy to gain four life out of the 2-for-1 trade. Atsuta’s plan involved playing defensively since he was at a dangerously low life total, so he played Basking Rootwalla, put Elephant Guide on it, and said go, leaving even Rorix on “D”. Maegawa untapped, played Verdant Succession, and ended his turn. With things being a bit more stable, Atsuta attacked with Rorix, and had enough mana to play Call of the Herd and flash it back in the same turn.

Things seemed grim, but Maegawa’s odd deck started doing what it was designed to do. He played Wirewood Savage, and when Atsuta attacked with Rorix, he sacrificed Anurid Brushhopper to gain life. When it died, the Succession triggered, and a second one came into play. This let Maegawa draw a card off the Savage, and gain more life as he repeated the process four times, leaving the Brushhopper out the last time. This drew him into Worship, and Gurzigost finished it.

Maegawa opened with Birds of Paradise, and Atsuta had Wild Mongrel. Wild Growth accelerated Maegawa into Living Wish, and he got a Baloth. Atsuta attacked for two damage, and summoned Goblin Sharpshooter. The Baloth hit play, and the Sharpshooter took out the Birds. Violent Eruption killed the Baloth, clearing the way for another Mongrel attack as Atsuta played Llanowar Elves. Maegawa simply untapped, played Aether Charge, and ended his turn. Elephant Guide on Wild Mongrel put a lot more pressure on the table, and Maegawa didn’t draw any creatures to put up a fight.

Maegawa’s draw only had Mossfire Valley as a green source, so he played Birds of Paradise on turn two, taking a point of mana burn. Atsuta had Llanowar Elves and Wild Mongrel, while Maegawa played Ravenous Baloth. Atsuta had a good answer in Phantom Centaur, and Maegawa summoned Wirewood Savage. Atsuta targeted the Baloth with Threaten, and Maegawa sacrificed it in response. This cleared the way for the Centaur and Mongrel to attack, dealing seven damage to Maegawa. All wasn’t lost, as Maegawa played Anurid Brushhopper and Leery Fogbeast, drawing a card for each off the Savage. The Brushhopper blocked the Centaur on Atsuta’s attack, and left play after damage went on the stack, with Maegawa discarding Call of the Herd and Birds of Paradise. Ravenous Baloth drew Maegawa yet another card, and gave him plenty of potential life to feel safe. Atsuta put Elephant Guide on Phantom Centaur, giving him an enormous threat, which Maegawa chump blocked with the Savage. Verdant Succession gave Maegawa more than enough life to survive, and on the following turn, the last part of the puzzle came into play: Aether Charge. Maegawa went off: he sacrificed each beast, gaining four life off every cycle, and as the new ones came into play, they dealt four damage each time until lethal damage was dealt.

Atsuta accelerated with Llanowar Elves, while Maegawa had Wild Growth. Wild Mongrel and a second Elves added to Atsuta’s side, while Maegawa played a Brushhopper, followed by Phantom Centaur. Atsuta had a Centaur of his own, and Maegawa played Verdant Succession. Threaten allowed Atsuta to steal a Centaur, and cleared the way for a huge attack, bringing Maegawa down to seven life points. However, as had been the case throughout the match, when Maegawa was on the ropes and about to lose, he’d get the pieces of his combo together. He summoned Ravenous Baloth to give him plenty of life to work with under the Succession, then drew Contested Cliffs. Even Leery Fogbeast got in on the act, chump blocking a Phantom Centaur and being replaced by a new one.

Even with a great deal of life and plenty of blockers, Maegawa was at a loss for answers when Atsuta played Rorix. To make matters worse, the dragon became even bigger with the help of Elephant Guide. Since Verdant Succession works for both players, attacks on the ground meant creatures dying and simply being replaced. The massive Rorix had a significant clock on Maegawa, but he had some time thanks to Succession providing Birds for chump blockers, and when they ran out, he could start sacrificing beasts for life. Eventually those ran out as well, and Maegawa drew Aether Charge. It was the card he had been looking for, but far too late.

Maegawa- “My deck went 3-2-1 this weekend, which means that if I lose here, I break even. I have to win this match!”

Atsuta mulliganed his opening hand. Maegawa’s Birds died right away to Firebolt, and he played Call of the Herd on turn three. Ravenous Baloth joined the elephant token on turn four, and Atsuta played Phantom Centaur. Maegawa’s confidence was growing as he played Verdant Succession, and it became apparent that the plan was coming together. Atsuta put on some more pressure with a second Centaur, while Maegawa played another combo piece in Wirewood Savage. Elephant Guide made one of the Centaurs bigger, so Maegawa simply chump blocked it with the Savage, getting another one. Aether Charge came out soon after, but Maegawa’s only beast was Ravenous Baloth, so the game wasn’t quite over- that happened on the following turn, as Maegawa played Leery Fogbeast.

After the game was over, Maegawa admitted that after sideboarding, he only had one Aether Charge in his deck.

4 Living Wish 2 Call of the Herd