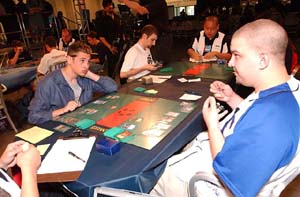 This Toothpick-mirror featured upstart Jordan Berkowitz versus the originator, Neil Reeves. Fast friends on the Tour, they adopted a master-and-apprentice relationship. Berkowitz inherited Reeves's love of the toothpick, and now they sit across from each other in a battle to make the semifinals. Berkowitz you might remember from his Top 4 at Pro Tour – Venice, while the always-outspoken Reeves recently added the Event Horizons Invitational Championship to his list of accomplishments. The matchup was apparently heavily weighted in Berkowitz's favor.

"This is like Darth Vader versus Luke Skywalker" – Dave Williams

"I'm not rooting for anyone." – Jordan Berkowitz

Reeves led with island and cycled Lonely Sandbar after Berkowitz got in with Basking Rootwalla.

"Hells yeah, Neil! Beat him like he was Tom Guevin!" – Jon Finkel

Reeves played a second land and was done. Berkowitz hit for one and added a Grim Lavamancer. It resolved. Smother took down the Rootwalla at end of turn. Reeves untapped and dropped Innocent Blood and Compulsion. Berkowitz, unfazed, played Call of the Herd. Reeves Edicted it away. Berkowitz kept a close eye on how many cards Reeves had in hand. He flashed back his Call.

Reeves dug once at end of turn and once more on his before playing a fifth land. Berkowitz hit and tried a second Call. Reeves was ready with Counterspell. Another Lavamancer joined the fray. Reeves's Deep Analysis gave him an Innocent Blood, but Berkowitz would get another hit with his Elephant. He went one better, serving up Blistering Firecat and bringing Reeves down to just four life.

"Of course you draw the one Cat." – Neil Reeves

Reeves Concentrated, leaving three mana up. He played Zombie Infestation and was done. Berkowitz dropped two Violent Eruptions on the table. Reeves showed no concern. Berkowitz picked them up and tried one of them. Circular Logic gave him a zombie to chump the incoming token. Now things started to click for Reeves. He Blooded away the token, and Compulsioned a Logic on the second Eruption. Llanowar Elves left Berkowitz without cards. Reeves Cunning Wished for Opportunity, untapped, and drew four. Berkowitz played another Elf.

He did rip a Call the following turn, but Reeves had Logic for the first half, and then Blood and flashback Edict to clear the board. Berkowitz was out of plays, and Reeves was flush with cards. They played draw-go for a few turns, and by the time Reeves found his Upheaval he didn't want to risk Berkowitz having the Upheaval. He worked his Compulsion and card drawing, looking for his Cunning Wish. Three cards from the bottom he found it. He searched out Circular Logic, and then made with the Upheaval. He floated two extra mana and burned for it, but was still at two with eight zombies on the table, and the insurance Logic in hand.

Both players sideboarded quickly. Their late-night playtesting meant they knew their strategies well in advance. Berkowitz led with a Lavamancer that was Blooded away, and then resolved a Compost. His Call of the Herd met Counterspell, but Berkowitz's Anger resolved. 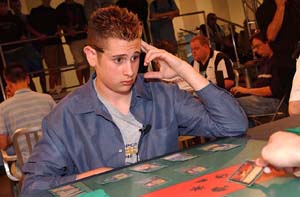 Reeves made no move. Berkowitz kept hitting. Lavamancer and Call of the Herd hit the table. Reeves Smothered both, giving Berkowitz more cards. He sent a Hammer to the face and made a Rootwalla. Reeves could only Smother again.

Berkowitz's Compost was keeping him in threats, so Reeves needed a big one. He got Deep Analysis, and played it, turning up two blanks. He shrugged and flashed it back, falling to five and tapping out. Berkowitz untapped, swung, and sent Eruption to the face.

"They can't hear us because we're not on camera, right? I don't care. I don't feel like talking." – Jordan Berkowitz

Berkowitz was first on the board with a Rootwalla. He swung in and pumped, but Reeves had the Smother. Reeves untapped and Duressed. He didn't like what he saw: Phantom Centaur, two Calls, Volcanic Hammer, Firebolt, and a third land. He shrugged and took a Call. Berkowitz untapped and played the other. Reeves had a steady stream of creature removal at the ready.

Berkowitz's library was up to the task. First it gave him the fourth land for his Call of the Herd. Then came another Call. Reeves fought through, but Berkowitz had drawn more burn. And then there was Rootwalla. Reeves kept pace. He had Logic for the Call on the way back, and suddenly Berkowitz was back down to just the Centaur in hand. Reeves played Deep Analysis and passed it back. Berkowitz drew and played Anger, swinging for two.

"You're sooooo good at this game." – Neil Reeves

"Is that guy in?" – Jordan Berkowitz

"Will you ever draw a land?" – Neil Reeves 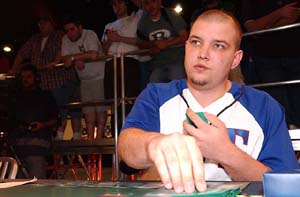 He Concentrated, pulling up three duds. He cycled Lonely Sandbar, earning a momentary reprieve from Hibernation. Berkowitz played a Wild Mongrel after combat. Reeves untapped and tried to bluff like he had something. Berkowitz cast his Centaur and smashed in.

"Seven spells in a row is pretty good. Especially Anger. He had no business winning that game. No business." – Neil Reeves

Again Berkowitz led with Rootwalla and pumped for damage while Reeves played a pair of islands. He played a swamp and Duressed, seeing Compost, Rootwalla, Hammer and Violent Eruption.

He snagged the compost, but watched in disgust as Berkowitz pulled a Call of the Herd. He didn't have the tools he needed to win, and after drawing Future Sight, sat there as his deck refused to give him the fifth land he needed. It came down a turn too late.

"This is actually the stone-cold nuts against you. If I'd drawn the fifth land last turn, you couldn't possibly win. 'Course now, you're gonna beat me." – Neil Reeves

This last statement was true. Reeves extended the hand the following turn.