Kai Budde, the German Juggernaut, was playing in his tenth lifetime Pro Tour Top 8, while Brad Nelson from the U.S. was only in his second. But whereas Budde's previous Top 8s had all been years ago, Nelson was currently on a streak, just having made Top 8 at the last Pro Tour in San Juan at the end of May. The match-up, White Weenie versus Treehouse, apparently didn't favor any player either, so this was certainly going to be an interesting match to watch.

Nelson played first thanks to this Pro Tour's new play/draw rule, which gave the choice to whoever finished higher in the Swiss rounds. He started with Verdant Catacombs for Murmuring Bosk, and Budde started with Flagstones of Trokair and Steppe Lynx. His second turn already saw Nelson drop down to 16, using his Bosk to cast Thoughtseize on Budde, who revealed a hand of Plains, Spectral Procession, Student of Warfare, and two copies of Knight of the White Orchid, as well as Steppe Lynx which Nelson took. He played a second land, Treetop Village, and passed the turn.

Budde attacked for 2 damage, summoned Student of Warfare and put that at level one. Nelson fetched a Forest with his second Verdant Catacombs and made a 4/4 Knight of the Reliquary. Budde got his third land via Knight of the White Orchid and cast Figure of Destiny, before he passed the turn.

Nelson used his Knight of the Reliquary to turn his Forest into Reflecting Pool, then proceeded to cast Putrid Leech, Tarmogoyf, and Treefolk Harbinger, setting up Nameless Inversion on top of his library. Budde summoned the second Knight of the White Orchid and played Marsh Flats to make his Steppe Lynx 4/5, potentially 6/7. The Lynx attacked, and the Harbinger chumpblocked. Budde cracked the Marsh Flats anyway and cast Spectral Procession.

Tarmogoyf attacked to put Budde at 16 to Nelson's 11. Then the American cast Elspeth, Knight-Errant, made a Soldier token and passed the turn. Budde thought long about his next move, trying to figure out how much damage Nelson could deal on his next turn. With Tarmogoyf, Knight of the Reliquary, and the Nameless Inversion in his hand, not an easy task. In the end, he settled on simply attacking with his three Spirit tokens, cast a third Knight of the White Orchid, and moved Student of Warfare to level three. He specifically did not spend all of his mana on either Student of Warfare or Figure of Destiny, but kept one land untapped, signalling (or bluffing) Path to Exile or Brave the Elements.

Indeed, it turned out to be the latter, when Nelson cast Maelstrom Pulse to kill off all three Knights. Brave the Elements granted protection from green and rendered a lot of possible attacks from Nelson moot as well. Instead he just pumped his Putrid Leech up to 5/5 flying via Elspeth and attacked with it. That left life totals at 11 to 8 in Budde's favor.

Student of Warfare improved by four additional levels and charged along one of the flying Spirit tokens. Nelson's Soldier token chump-blocked the 4/4 Student and Nelson went down to 7. Nelson made another token with Elspeth, Knight-Errant and passed the turn. Budde figured by now he would lose his Student to Nelson's Knight of the Reliquary, and just attacked with one flying token to put Nelson at 6, then summoned Ranger of Eos (searching Student of Warfare and Figure of Destiny).

Nelson knew he wouldn't have another turn if he couldn't get Maelstrom Pulse now. If he did, he would be able to get rid of both of Budde's flying blockers, then attack with an enormous flying Knight of the Reliquary thanks to Elspeth, Knight-Errant to take the first game. If the top card of his deck was Maelstrom Pulse. 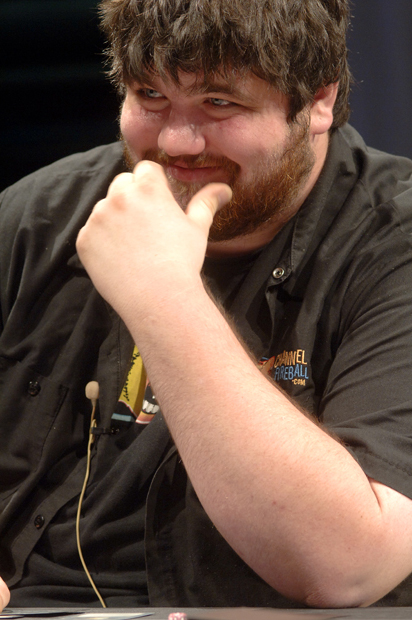 We're calling it now: Brad Nelson is a future legend of the game.

Nelson got more and more creatures on the board with a second Loam Lion and Treefolk Harbinger, once again searching for Nameless Inversion. Budde went all in and cast not one but two Spectral Processions! With now seven flying 2/2 tokens on the other side of the battlefield, Nelson once again needed a Maelstrom Pulse ... quickly. He didn't get it, and six of the flyers took him down to 1 life, while one died to Nameless Inversion.

The very next turn, however, he drew the Maelstrom Pulse and left Budde with Knight of the White Orchid as his only creature. Nelson started to get some damage in himself. He needed to end this fast, before Budde found a way to finish him off. It was close, but Budde had Brave the Elements to sneak in the final points of damage.

This time, Nelson had the monster draw with lots of monsters: by turn three he was already attacking for 6 with Loam Lion and Treefolk Harbinger which had, of course, searched up Doran, the Siege Tower.

Meanwhile, Budde had Figure of Destiny and Honor of the Pure, followed by Spectral Procession. Nelson had the Maelstrom Pulse for the flyers and Budde was peeking at the top card of his library, asking: "Miracle?"

There was none, and he quickly shuffled it up.

Budde played first and had Figure of Destiny, once again followed by Honor of the Pure. Nelson did one—or several—better, with Loam Lion followed by Putrid Leech. On turn three Budde had no play at all and just put a counter on his Figure. He did, however, cast Path to Exile on the Putrid Leech, when Nelson cast Duress. Left in his hand at this point: only lands.

Nelson made a 4/5 Tarmogoyf, and on the next turn Doran, the Siege Tower. In the meantime Budde had got his Figure to 5/5 (Honor of the Pure, remember?) and, when Nelson's full team swung in, had Celestial Purge for Doran while his Figure took down the Tarmogoyf. 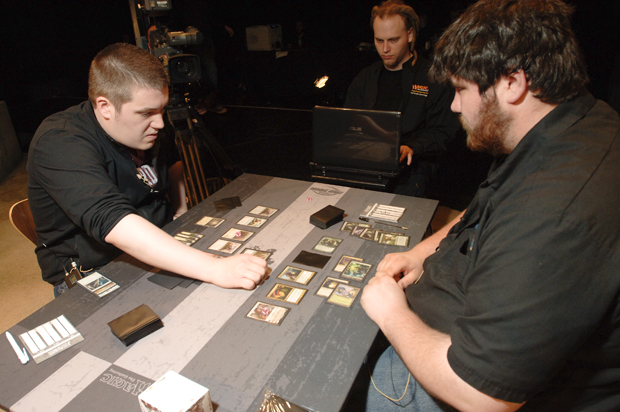 To be the best, you've got to beat the best

Nelson had a replacement Doran, but Budde's Figure reached 9/9. The board was a stand-off, with Doran, Loam Lion, Treetop Village, and a recently added Treefolk Harbinger against the Figure.

"Come on, Ranger of Eos—come on, Antoine," Budde commanded, looking encouragingly at the top card of his library.

It wasn't. It was Knight of the White Orchid. Still he decided to attack with his massive flyer, to take Nelson to 9, with the Knight back on defense as a chumpblocker. One more attack and this match would be over. Nelson was looking for a topdeck, potentially a removal spell. What he did in fact get was Kitchen Finks. Not quite the same, but it did bring him up to 11 and bought him just the time he needed to bring things home.

Budde went down to six in the final game and kept a hand with three Plains, Knight of the White Orchid, Honor of the Pure, and Spectral Procession. Nelson spent his first turn more productively with Treefolk Harbinger searching up its big brother Doran, the Siege Tower. On his second turn, Budde made Honor of the Pure, while Nelson summoned Tarmogoyf.

Budde cast Spectral Procession, but Nelson unmade that spell with Maelstrom Pulse and attacked with Tarmogoyf. Budde just made Knight of the White Orchid and passed the turn, whereas Nelson summoned his deck's trademark "0"/5 creature.

With a sigh, Budde dropped a fifth land onto the battlefield and passed without play. When Doran attacked Budde had Path to Exile, but one down, more to come: Nelson summoned another Doran and on his next turn cast Elspeth, Knight-Errant. Budde was out of spells and soon after out of life.

Brad Nelson defeats Kai Budde 3-1 and advances to the Semifinals!