Quarterfinals: No Owls Allowed at This Zoo

what are you going to do if you lose?" asked Antoine Ruel. "I don't want to kill you."

"Bah, even if I lose, life goes on," responded Craig Jones. "I know this is heavily in my favor, but you can't take anything for granted." 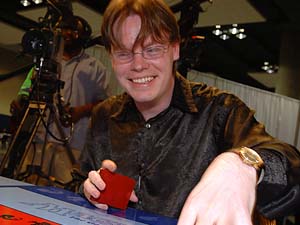 Why is this man smiling? Too many reasons to list

Jones knows that for a fact, having jumped out to an undefeated start at two previous Constructed Pro Tours before collapsing on Day Two and finishing far short of the Top 8. All of that is behind him now, since Jones managed a 7-1 on Day One this time around, and then devoured a series of slow control and combo decks on Saturday to become the first player to lock up a Sunday spot here in Hawaii.

In contrast to Jones, Ruel has been under the bright lights many times before. The winner of last year's Pro Tour-Los Angeles, Ruel played his Owling Mine deck extremely well this weekend. He managed to sneak into the Top 8 on tiebreakers in the very last round, only beating out Spaniard Jacob Arias Garcia by six hundredths of a point. Of course, coming into the Top 8 as the eighth seed was both good and bad for Antoine. He got to add yet another Sunday appearance to his resume, but he also went to bed Saturday knowing that he would have to wake up in the morning and face Zoo, basically an impossible matchup for the Owl deck.

"First time under the lights," Jones murmured, clearly a little jittery, "Everybody cocks up under the cameras."

Jones got exactly the start that he was looking for, casting a pumped Kird Ape on turn 1 and Kami of the Ancient Law on turn two. Ruel's only play in the first three turns was Howling Mine, but he had back to back Exhaustions to slow down Jones's Burning-Tree Shaman and Savannah Lions, with Pyroclasm and Eye of Nowhere a turn later to leave Jones with only a Kird Ape on the board.

The problem with all of this is that the Howling Mine kept Jones's hand filled with gas, and Owling Mine only cooks with electricity. Ruel died to Char and Lighting Helix a turn later.

"You really don't have to be," replied Ruel.

Before the match, Antoine explained that this matchup was so terrible that he just had to give up on it, and included zero cards in his sideboard to try to help out against the aggro matchup. This strategy worked for him in the Swiss, letting him stack his sideboard with cards that chewed through the slower decks in the field, but now his owls were being stalked by craven predators bearing flame throwers. Ruel could have not shown up for this match and probably stood a better chance of winning it.

Ruel started Game 2 sans a mulligan this time and with Howling Mine plus Kami of the Crescent Moon on the first two turns, as Jones dorked up the board in a hurry, putting a Kird Ape (leaded) and Isamaru into play.

Lightning Helix killed the Kami and Savannah Lions were now also on the prowl, but Ruel made the clever play on the next turn of Boomerang-ing Jones's Stomping Ground and casting Pyroclasm, filling Jones's graveyard with a host of animal bodies.

Sadly for the Frenchman, animals are like Doritos in the Zoo deck - Antoine could crunch all he wanted, but Jones was just going to make more, fed by the very plan that lets Ruel actually win matches. Evacuation put the reinforcements back into Craig's hand, but they just came back down a turn later, eventually dropping Ruel to 5, while a Sudden Impact for eight put Jones at 11. 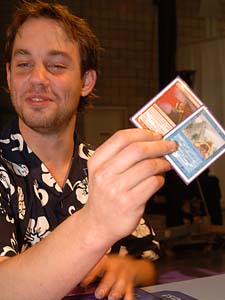 Jones tried to attack for the win with Watchwolf and Isamaru when Ruel cast Gigadrowse to tap the two creatures, Boomerang-ing Jones's Watchwolf when he tried to foil the 'Drowse with Bathe in Light. Jones put a Kird Ape down in the Wolf's stead and passed the turn. Ruel then whimsically notched a moment in Pro Tour history, passing his turn and then stacking Sudden Impact against Jones after Craig's draw. With the Impact on the stack, Antoine cast Ancestral Recall targeting Jones, a classic piece of showmanship from the Pro Tour champ.

You could practically see Jones's heart stop when the blue spell came down, as he'd been fearing Twincast plus Impact for two turns now, but Craig simply got a laugh out of it, and then answered Vintage card with Vintage card, pointing a red Psionic Blast (a.k.a. Char) at Ruel's dome to win in response (Ruel had to take a point of damage from Shivan Reef to cast the Impact, leaving him at 4).

Jones mulliganned to four on the draw for Game 3 and then ran over Ruel, putting the Englishman into the semifinals via what Ruel referred to as "the worst matchup in Pro Tour Top 8 history."