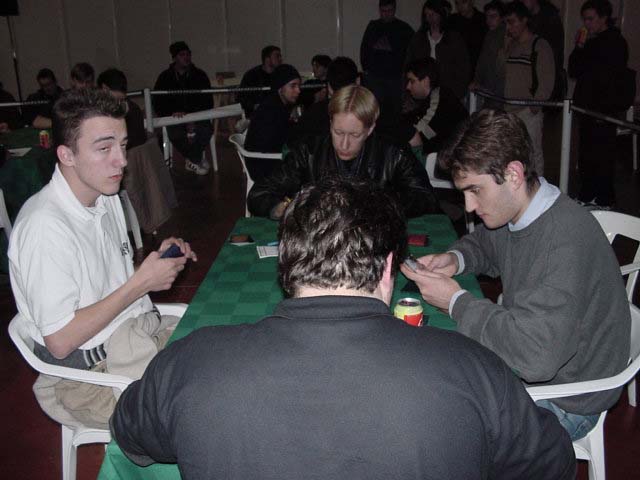 In the quarterfinal we have the newcomer Raul Mestre who has done quite well in his second tournament ever (the Planeshift pre-release was his first) versus one of top players at the moment Olivier Ruel. The multilingual Frenchman spoke to the judge and his opponent in Spanish and everyone seemed relaxed. Ruel won the roll and chose to go first.

Raul took the lead with a second turn Llanowar knight but Olivier used his third turn harrowing into four different basic lands and playing an Angelic Shield. Raul attacked and played a Capashen Unicorn. Olivier forgot to lay a land and played a Sunscape Familiar keeping an Island and a Mountain untapped for Exclude. Raul attacked for one and had his Rampant Elephant excluded. Olivier played a land tapped five mana played Serpentine Kavu and attacked for four. Raul tried to shackle it but Olivier responded by returning it to his hand. After this Olivier played the Serpentine Kavu and attacked again. Raul locked the ground with a kicked Prison Barricade but didn't look very pleased when Olivier play a Mirrorwood Treefolk next turn putting him on a six turn clock. In order to mount a counteroffensive Raul played a Thornscape Familiar and an Aurora Griffin. Olivier chose to draw two cards from a Sunscape Battlemage before killing Raul's only offensive weapon the next turn with his second Battlemage. Olivier returned one of the Battlemages with a Sawtooth Loon and Raul didn't see any point in continuing as his opponent controlled superior creatures, more cards and was at 14 lives.

Raul added another color in form of the mighty legend Tahngarth in order to deal with Olivier's troublesome creatures. Game 2 saw Raul play a second turn Fertile Ground only to not lay another land for three turns. Olivier played a Nomadic Elf, a Sunscape Apprentice and a harrow during those turns. Raul finally managed to draw a land and played Aurora Griffin followed by Treefolk Healer. Olivier on the other side of the board seemed manaflooded and played a Thornscape Apprentice and a Sunscape Battlemage that he use to draw cards with. He didn't draw his second one this turn so he used Sunscape Apprentice to put it on top of his library in order to kick some Griffin butt. Raul played a Prison Barricade and a Pincer Spider but when Olivier played Steel Leaf Paladin returning the Battlemage it looked like Raul was in a lot of trouble. Olivier played Sunscape Battlemage for the third time this match only to return it again with an Arctic Merfolk. Using this card advantage engine it didn't take long time before Raul threw his Capashen Unicorn in front of the Steel Leaf Paladin giving Olivier an opportunity to end the game with Draco that he had been holding for quite some time.