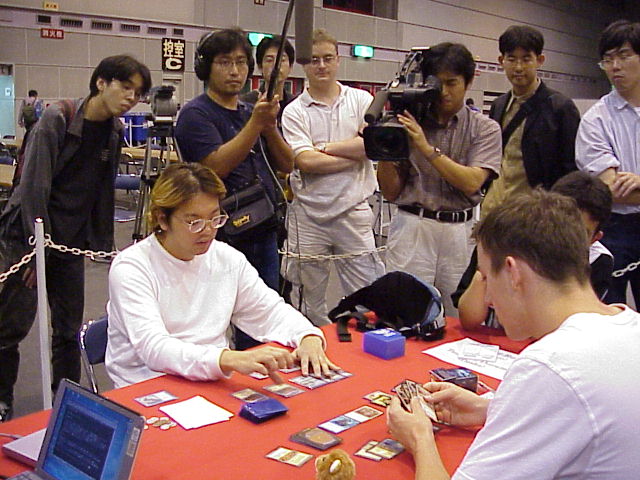 In one of the better Top Eight matches to be played in Japan, France's Olivier Ruel brought his knowledge and expertise halfway around the world to face former Japanese National Champion Tsuyoshi Douyama. If track record alone were to be used in deciding the match, Ruel would appear to have a major advantage. A member of the French team Black Ops, he became a Masters champion when his team won the first Masters Team Event. Add to it, a Team Grand Prix win at Cannes, as well as a 6th place finish at Pro Tour New York 2000 and the French Team Championship, things would appear great on paper for the Frenchman except for one minor detail, his challenger has a record of his own. The 2000 Japanese National Champion, Tsuyoshi Douyama is no newcomer to high-level tournament Magic. A regular on the Pro Tour, he is looking to better his highest Grand Prix finish ever. And that would be a second place finish at Grand Prix Kyoto.

Before the first game, Olivier Ruel pointed out that Douyama had one of the three best decks in the draft. For him to get through to the finals, he'd have to beat Tsuyoshi, then beat one of the other two best decks, which were paired against each other in one of the other Quarterfinals matches. Tsuyoshi's thoughts were that if he could get past Olivier, he would win the tournament.

Upon walking up to the table for the start of the match, Douyama wanted the side that Olivier had already sat down at. After failing to resolve what constituted the 'heads' portion of a Japanese Yen, Ruel put his stuffed cow in one hand and his lion in the other. Putting them under the table, he asked Tsuyoshi which hand held the cow. After Tsuyoshi selected, Olivier checked his hands and quickly switched the cow to the other hand, showing it to the beaming Tsuyoshi. Tsuyoshi elected to play first. 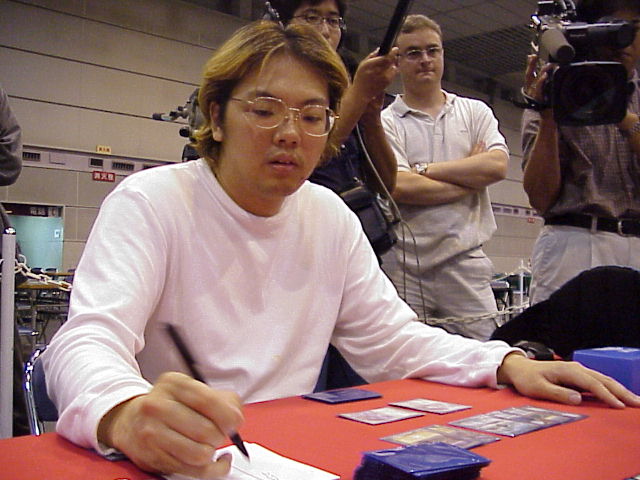 Waiting for the start of the matches, Tsuyoshi kept his eye on the official clock, prompting Olivier to look over his shoulder and proclaim, "You'll destroy me in ten minutes so we won't need all that time." It was apparent Ruel wasn't confident in his chances.

Mulliganing to six, Ruel was able to summon a Mystic Visionary on his second turn. The Visionary did a quick four points of damage due to Douyama's failing to draw a Plains during his first four turns. Finally drawing one on turn five, Tsuyoshi called forth a Mystic Zealot, halting temporarily the beats he'd been receiving. Ruel, with a slight life advantage due to the color screw of Tsuyoshi's, summoned a Rabid Elephant which would prove to be a key player throughout the rest of the game.

Summoning an Aven Flock, Douyama appeared to be making a slow comeback of sorts, but by failing to play creatures in the early portions of the game, he had his work cut out for him due to the life differences (20-16 in favor of Ruel).

On Ruel's next turn, he attacked with his Elephant, dropping Tsuyoshi another three points of life down to 13. Sacrificing an Abandoned Outpost for blue mana, Olivier summoned a Cephalid Broker, another card that would prove key to the eventual outcome.

Tsuyoshi knew his chances were fading fast and attempted on the following turn to Repel Ruel's Broker, but Ruel chose to use a Shelter (choosing to protect against blue) in order to keep his critter on the board. Still, Tsuyoshi attacked, getting Ruel down to 16 life. Then, in order to keep Ruel's Elephant at bay, Tsuyoshi enchanted it with Kitar's Desire before ending his turn.

With a lull in the action, Olivier brought forth a Scrivner, electing to bring his Shelter back to hand while Tsuyoshi was able to summon up a Patrol Hounds and Blessed Orator. These two creatures appeared to shore up his defenses and give him a small chance at a major comeback, despite his being at 9 life. 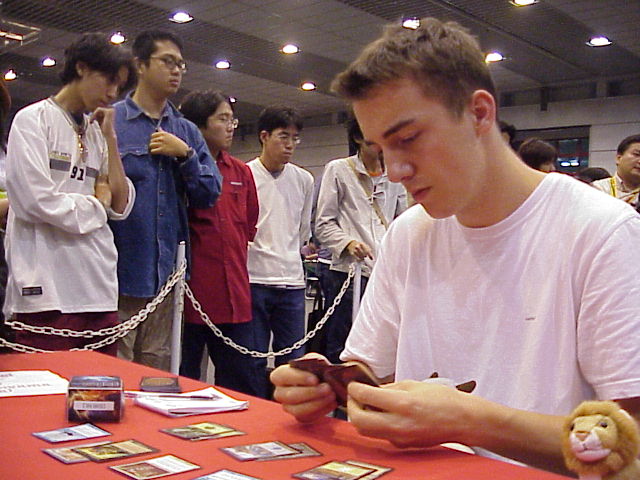 It didn't appear to be enough because on the following turn, Olivier cast his Shelter for the second time in the game, giving his Elephant protection from white, freeing the pachyderm of Tsuyoshi's Kitar's Desire and allowing it to attack against Tsuyoshi's all-white army, taking Douyama to a precarious 6 points of life. To add insult to injury, Ruel then summoned Beloved Chaplain.

The creature buildups continued due to Tsuyoshi's playing an Embolden that gave him enough time to throw out some more chumps. But the game was at a standstill. The advantage would go to the player who could draw the best cards off of the top of his deck, an advantage that would go Olivier's way due to the drawing power of his Cephalid Broker. After several attempts to draw something broken, Ruel got his wish, drawing a Cultural Exchange. Playing the Exchange, he was able to exchange his relatively weak creatures for Tsuyoshi's good ones. This forced scoop action by the former Japanese Champ.

The second game saw quick starts by both players, despite Ruel's having to Mulligan once. By turn five, Tsuyoshi had summoned a Mystic Visionary and Mystic Zealot, while Olivier summoned a Mystic Visionary, Blessed Orator, Krosan Archer, and Zombie Assassin. On turn six, Ruel sacrificed the Assassin to kill Douyama's Mystic Zealot, then attacked with his Krosan Archer. Tsuyoshi tried to Second Thoughts the Archer, but his attempt was countered by a timely Rite of Refusal. The outcome of this play by Douyama would be typical of the way the game would go for him. On his next five turns, he failed to cast a creature while using an Embolden to prevent some major damage coming his way.

Majorly mana flooded, he began to lay blockers only when his life had been taken down to one. Even though he found a temporary solution, being at one life just wasn't something Tsuyoshi was going to be able to survive. The end came shortly, as Ruel drew into his Cultural Exchange. By casting it and exchanging his poor creatures for Tsuyoshi's good ones, the game ended in the same manor as the first, giving the Frenchman the 2-0 victory and a chance at another very good deck.