into this tournament, most people knew that the Decks to Beat were Dragonstorm and Boros. Sure, there were other decks on the radar, and over the last few days more have appeared, but at the heart of it all ticked the four- to five-turn clocks set by these two decks.

Not only are Makihito Mihara and Paulo Vitor Damo da Rosa helping wave the flags of these flagship decks on the final stage today, but Damo da Rosa is also a member of the Brazilian National Team. In classic Brazilian style, he's representing his home turf by wearing the timeless Brazilian soccer shirt (or football jersey, for those of you outside America). Mihara, on the other hand, is part of the strong Japanese contingent here this weekend, as they are most weekends when it comes to the Pro Tour. 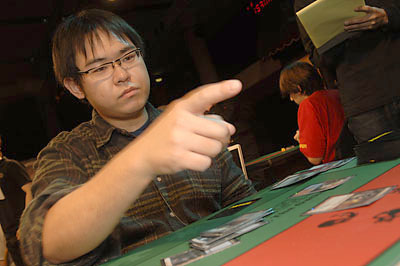 Makihito Mihara, comin' at you.

To kick off, Mihara won the die roll and naturally chose to play. The anticipated turn of execution for his Dragonstorm deck is turn four, but this can always mean somewhere between turn four and six in any given game. On the other side of the table, were Damo da Rosa to be playing against a poor, defenseless goldfish, he could be depended upon to deliver the killing blow around turn five. Most opponents would of course put up some semblance of a defense, however, and while Mihara may give the appearance of something small and helpless for a few turns, the sudden appearance of several large red Dragons would soon set him well apart from any small, orange, aquatic life forms.

After both players settled on hands of six cards, Mihara started out exactly how he needed to with an Island and a suspended Lotus Bloom. Da Rosa made his first threat an Icatian Javelineers, which in these circumstances would need to work very hard to pull the weight needed to see this one through. His second turn Soltari Priest ran into a Remand, giving Mihara more than enough time to get to his crucial turn. Luckily for Damo da Rosa, all Mihara could do with his Lotus was Rite of Flame out a single Bogardan Hellkite. Damo da Rosa fought back, burning the Hellkite out of his way with a Rift Bolt and a Volcanic Hammer, but couldn't stop a second Hellkite from roasting off half of his face and then attacking for the win.

After both players again mulliganed to 6, Damo da Rosa answered Mihara's turn-one Lotus Bloom and Sleight of Hand (off an untapped Steam Vents, ow!) with a Soltari Priest, and followed that up with a Cryoclasm on Mihara's Steam vents to drop him to 13. The one remaining Giant Solifuge in Damo da Rosa's deck slammed into the Red Zone on his fourth turn giving Mihara exactly one turn to untap, play and sacrifice his Lotus Bloom, play Rite of Flame, Seething Song and Dragonstorm for four Bogardan Hellkites. Luckily for Mihara, that's precisely what he did. 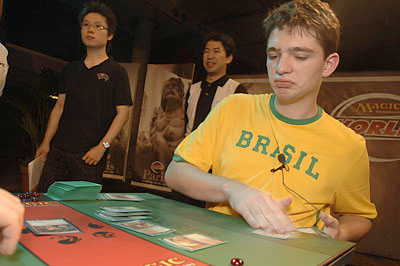 Paulo Vitor Damo da Rosa doesn't much care for the taste of dragons.

This time neither player mulliganed (no Paris mulligan jokes here, not one) and Damo da Rosa played out his perfect opener of a turn one Savannah Lions, followed by a Knight of the Holy Nimbus on turn two. Not to be outdone, Mihara again suspended a Lotus Bloom on his first turn and then cycled a Remand on Damo da Rosa's backup Savannah Lions. Time was up for Damo da Rosa: Mihara was about to have his fourth turn, and the Japanese player still had 5 life to his name. Damo da Rosa passed back the turn with four mana untapped to see what Mihara could muster. The Lotus was sacrificed, and a Rite of Flame conducted, but all that came forth was a single Hellkite. Mihara mowed down the pair of Savannah Lions and passed the turn back. Da Rosa sent his Knight off to face the Dragon, and showed Mihara what an Honorable Passage would do if combat ensued.

Of interest is the fact that the Knight would flank the Dragon down to a 4/4, so the Honorable Passage would only deal 4 damage to Mihara, not the required 5. Mihara scooped anyway, and Damo da Rosa told us both afterwards that he had another burn spell to make it a moot point.

After a mulligan to six, Mihara missed suspending a Lotus Bloom on his first turn for the first time this match. His hand was clearly not up to the task of competing with Damo da Rosa's Savannah Lions and Soltari Priest, as his fourth turn passed with no flurry of mana spells. He continued to dig with Telling Time, but had nothing to show for it when da Rosa burnt him out with a Char a few moments later.

Going into the final game, Mihara was happy with his hand, which is seldom a good sign for whoever happens to be on the receiving end of a Dragonstorm deck on the play. Damo da Rosa looked at his hand and promptly packed it away. He looked at six cards, grimaced, and threw them back as well. The five cards were apparently just right, as he pumped out a turn-one Savannah Lions on the back of a Flagstones of Trokair. The Lions got in for 2, and Damo da Rosa was forced to pass the turn without a second land. Mihara threw down a Repeal at the end of Damo da Rosa's turn before untapping and sitting on Remand mana, daring Damo da Rosa to try and get into the game.

The Brazilian drew his card and pondered his predicament before shrugging and running the Lions into the Remand. He then flipped his new card into play, a Plains, and played the Lions for a third time before passing. Mihara played an Island and passed, and Damo da Rosa's deck again delivered the goods in a second Flagstones, fetching out a pair of Sacred Foundries after Damo da Rosa made a Knight of the Holy Nimbus. Mihara could only Telling Time into another Telling Time before laying a land and again giving Damo da Rosa further opportunity to inflict injury. Damo da Rosa made another Knight and suspended a Rift Bolt, attacking Mihara down to 12.

Mihara untapped and played a Sleight of Hand. He then played a Mountain and a Rite of Flame, leaving four lands untapped. He started to play another Rite of Flame but realized this would still leave him one mana shy of being able to cast Dragonstorm. With two red mana floating about in his pool, Mihara began to panic. He began frantically adding up his options, rapidly tapping his finger on the table, every time coming up one short of nine. His hand was Rite of Flame, a Repeal, a couple of lands, and the Dragonstorm.

Finally he Repealed the Savannah Lions, leaving three lands untapped and one red mana in his pool. He carefully drew the card and finally exhaled, flipping a third Rite of Flame on to the table and barely, just barely managing to play a Dragonstorm for three Bogardan Hellkite and two Hunted Dragons. More than enough red leathery skin to leave Damo da Rosa a smoking hole in the ground and to propel Mihara on to the semifinals. 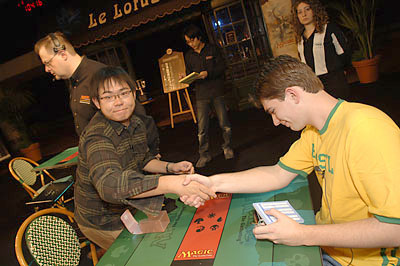