Quarterfinals: One by One

ometimes it's difficult to recall what an amazing career No. 13 Ranked Player Josh Utter-Leyton has had in just a few short years. The former Player of the Year only made his Pro Tour debut in 2008 and already has five Pro Tour Top 8s, something only 24 players have ever done over careers that span ten years or more. Utter-Leyton has quietly piled up a resume that not only puts him easily in the discussion for the Hall of Fame, but puts him on a trajectory to be among the best of all time.

He's done so quietly and consistently. But he's also done it without a single win.

No Grand Prix wins. No Pro Tour wins. The closest he came was Pro Tour Philadelphia in 2011 where he fell in the finals to Samuele Estratti. His resume doesn't need a win to look good, but there's no doubt Utter-Leyton wants one.

No. 14 Ranked Player Stanislav Cifka, on the other hand, is in his second Pro Tour Top 8, but already has a trophy perched on his mantle back home in the Czech Republic. Coincidentally, his win came in Modern, the same format in which Utter-Leyton picked up his second place trophy.

The route to the finals for both decks is fraught with peril. This match alone could go any number of ways for any number of reasons.

Cifka's White-Red Heroic deck could be fast, brutal and efficient. It could also stumble along the way without its best draws, which involved multiple one and two drops and ways to buff and protect them and put multiple tokens into play.

"It's big that I'm on the play," Utter-Leyton says. "I hope he doesn't hit his best draws. I can't beat his best draws, but I don't think his average draws are that good."

Cifka, for the most part, agreed that the match-up could swing on any number of small things, including Utter-Leyton's higher seeding.

"The match-up is pretty good, but I'm on the draw, and I don't think I have any good match-ups in the Top 8 on the draw," Cifka said. 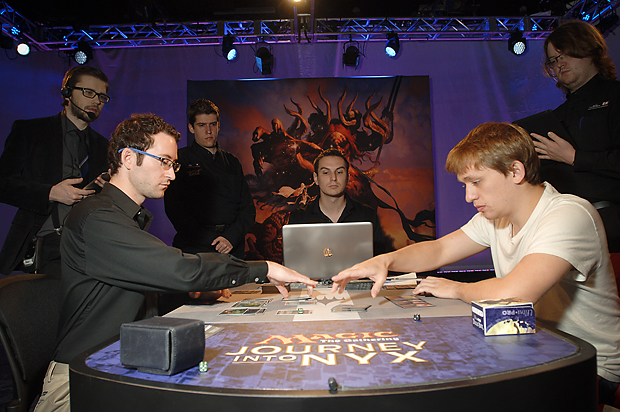 No. 14 Ranked Player Stanislav Cifka was aiming for a second Pro Tour trophy with White-Red Heroic. No. 13 Ranked Player Josh Utter-Leyton, on the other hand, was hoping to win his first title after four previous appearances in the Top 8.

Utter-Leyton had any number of ways to counter even the best draws with his BUG Control deck, most notably Sylvan Caryatid and Courser of Kruphix. Those two creatures would be key to blunting any attack and gaining back enough incremental life to stay ahead of Cifka's ultra-aggressive deck.

Cifka played against two versions of BUG Control during the Swiss rounds, defeating a version closest to Utter-Leyton's but losing to one that was more focused on beating aggressive decks. Whether that slight difference in how the BUG Control decks were built would matter is exactly what we were about to find out.

Both players started out just as they wanted to, with Utter-Leyton landing a key Sylvan Caryatid on his second turn and Cifka leading with a pair of one-drops.

Needing to find that land and not wanting to risk his Courser of Kruphix, Utter-Leyton was unwilling to place his 2/4 in front of a 1/2 Favored Hoplite, wary of a large number of tricks.

Thoughtseize, however, revealed exactly what tricks Cifka did or did not have, and it turned out he had a lot. Gods Willing, Launch the Fleet, Ordeal of Purphoros, Coordinated Assault, and a Phalanx Leader looked back at Utter-Leyton as he considered how best to stay ahead while lacking a third land. Eventually, Phalanx Leader hit the bin. With full knowledge of Cifka's tricks, Utter-Leyton would be able to play around each of them if he could get out from under the mana stall he was facing. 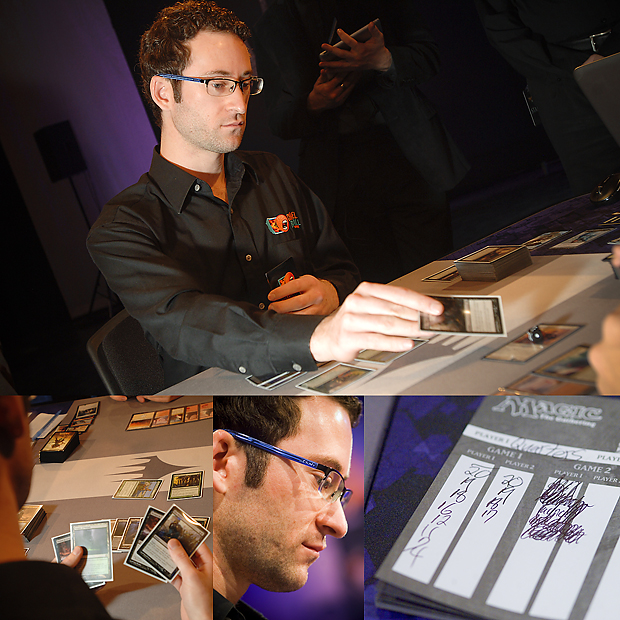 Utter-Leyton fights a stall on two lands as best as he can to stave off his aggressive opponent.

A second Sylvan Caryatid certainly helped, but Cifka now had four mana and a tapped out opponent to work with.

Step one was Ordeal of Purphoros on the Favored Hoplite, pushing it to a 3/4 on the attack. Coordinated Assault made it a 5/5 for the turn and gave Cifka a red soldier to boot. Utter-Leyton fell to 11 with no blocks.

Once again the American missed on land. And though he had access to removal spells, the Gods Willing Cifka was careful to keep up blanked any attempt he might make on the Hoplite's life. His draw had started out ideal, but the lack of lands was hurting his prospects and limiting his options.

Unravel the Æther kept Cifka from completing his Ordeal, but another unblocked attack for 4 dropped Utter-Leyton to 7. When a Satyr Hoplite joining the white-red team, the Launch the Fleet perched in the Czech's hand was looking closer and closer to lethal. 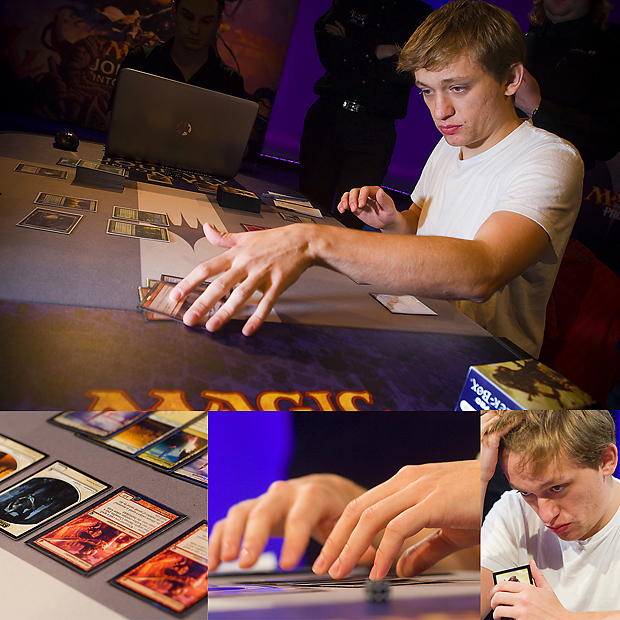 Cifka's heroic creatures aim to claim the last remaining points of life from his opponent.

Another turn went by, and still no land came for team BUG Control. That led Cifka to finally pull the trigger on Launch the Fleet, getting three soldiers out of the deal and sending Utter-Leyton to just 4 life. Silence the Believers drew out the Gods Willing, but Utter-Leyton was still under the gun when he was finally able to remove the Hoplite the following turn.

Still, he fell to just 2 life on the next attack, still unable to find a third land. In a few turn, with Utter-Leyton still mana starved, Cifka was able to piece together just enough damage to sneak through for lethal.

After stealing what looked like a game he never should have been in in the first place, Cifka stretched, slapped his face twice, and began contemplating his next move. He had been fortunate to escape the first game, and Utter-Leyton's sideboard was stacked with ways to counter his deck, including three Drown in Sorrow and another Bile Blight.

Mulligans for both players kept things fair and Cifka slapped himself twice more, quickly, as the second game began.

Satyr Hoplite and Hero of Iroas kicked off Cifka's beats, but Utter-Leyton's start was better, with a pair of scry lands and a Drown in Sorrow. When Courser of Kruphix came down the following turn and actually revealed a land for the first time in the match, Utter-Leyton found himself exactly where he wanted to be on the board. 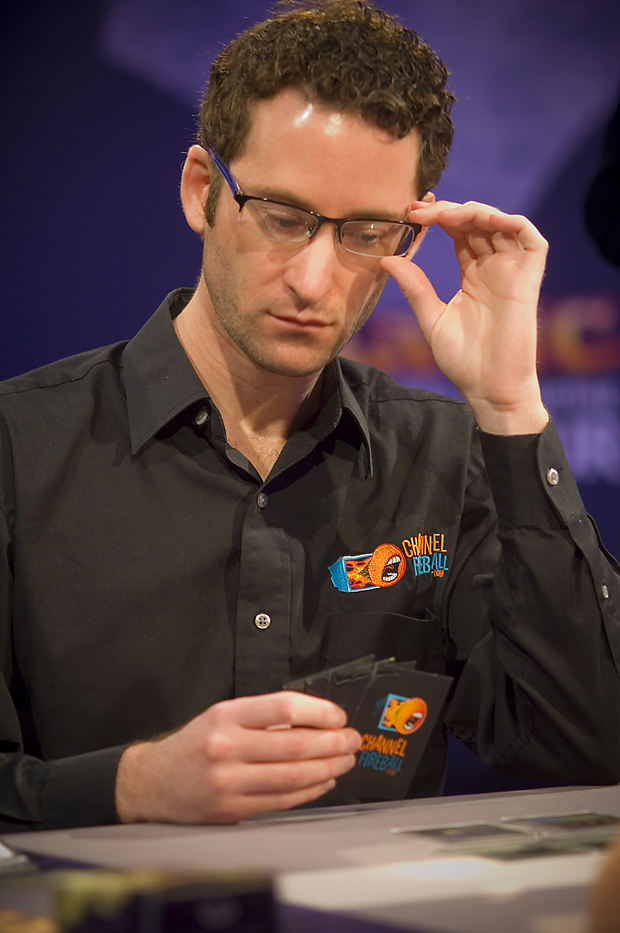 Utter-Leyton demonstrates the power of what his BUG Control deck had with a fast start.

Cifka made an attempt to stay in the match, growing a Favored Hoplite to 3/4 over the next two turns thanks to a completed Ordeal of Purphoros (which became 4/5 when Gods Willing saved it from a subsequent Bile Blight), but that was as good as things would get for Cifka.

Silence the Believers silenced the Hoplite and let Utter-Leyton enact his long-game plan. Ashiok, Nightmare Weaver started exiling cards and Courser of Kruphix started attacking, but it was all pretty much academic at that point anyway. Several turns and many attacks later and we were on to a third game.

On the play for the first time in the match, Cifka offered a definitive "I keep" after slapping himself twice. He seemed happy with his draw, and, for a time, it looked like it could pan out.

First, Favored Hoplite picked up a Dragon Mantle but fell to a Feast of Dreams. Then Phalanx Leader arrived to aid his troops, including a second Hoplite. Coordinated Assault further buffed Cifka's team and dropped Utter-Leyton to 16.

Just like that, before his fourth land hit the table, Utter-Leyton was facing a 3/3 and a 3/4, with promises that both could grow quickly. 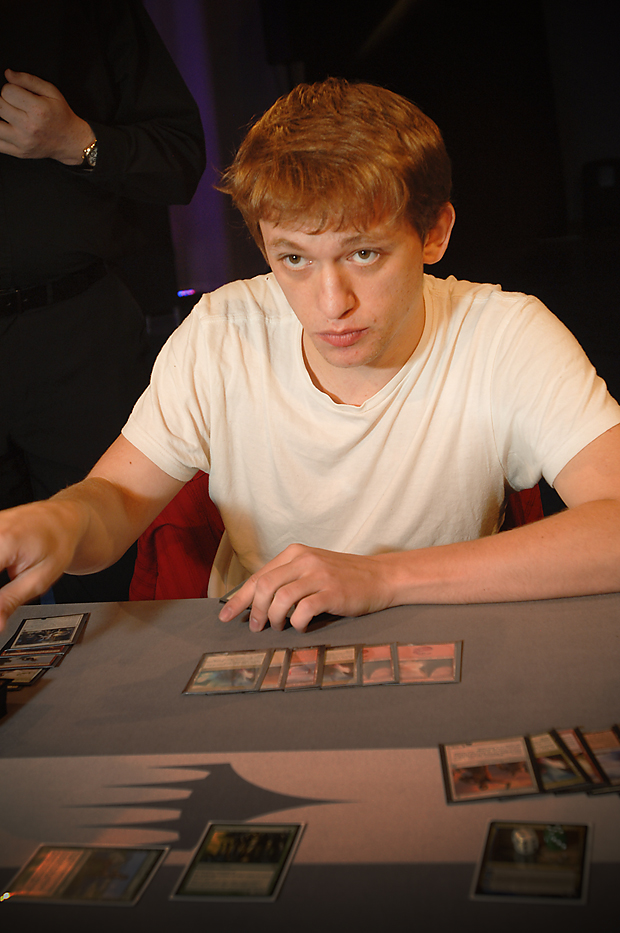 Cifka's creatures start out small, but they certainly don't stay that way.

Thoughtseize then seized up the game as both players contemplated their next move. Cifka thought for a while about firing off a Gods Willing in response, but in the end opted to expose it and a Brimaz, King of Oreskos. Then it was Utter-Leyton's turn to think. Given the weight of the moment and the direction it would take the game in, this decision would color the rest of Utter-Leyton's game plan. Did he want to have to deal with two potentially large, protected creatures? Or would he rather face down three troublesome but likely vulnerable creatures?

He chose to bin Gods Willing and, on the following turn, traded a Courser of Kruphix for a Phalanx Leader by double-blocking. The block worked spectacularly, and when Kiora, the Crashing Wave followed the next turn – and Hero's Downfall appeared on the top of Utter-Leyton's deck – it looked like the control mage might just be ready to take over.

Kiora fell to an attack, but Utter-Leyton started taking over as Cifka began to draw useless lands. Many pros had pointed out over the course of the weekend that the aggressive decks were best when they drew three to five lands, and Cifka, between the four in play and two in his hand, was already up to six.

Two removal spells later, and Cifka's board was entirely clear. Utter-Leyton lacked the second blue mana to put the game away with Prognostic Sphinx, but, for all intents and purposes, he had full control of the game.

Seeing the writing on the wall, and another land from his deck, Cifka extended his hand and congratulated Utter-Leyton. 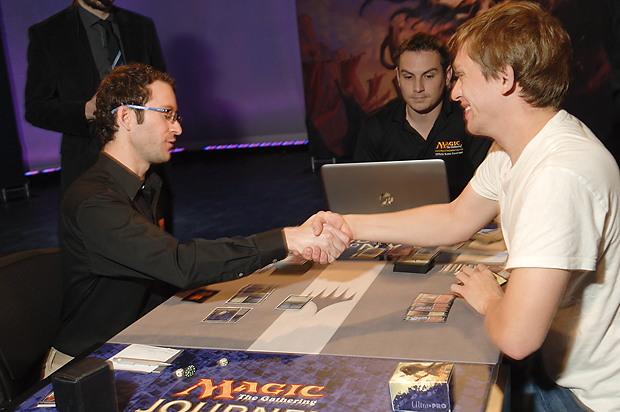 Despite starting off the match with a win, Cifka's heroic creatures ultimately succumbed to Utter-Leyton's BUG Control deck.

After the match, Utter-Leyton, obviously pleased to move a step closer to the finals, highlighted a few key moments.

"Well, one key moment was that if I ever draw a land in Game 1, the game is just over," Utter-Leyton said, still astounded by the string of non-lands that showed up on the top of his deck. "I didn't even need the mana, I just needed the 2 life."

The second game wasn't close thanks to Drown in Sorrow, he added, but the third game was interesting and, he said, tenuous for a while. The Thoughtseize turn was key to his win for a number of reasons.

"On the Thoughtseize, I took the Gods Willing, because they [Brimaz, King of Oreskos] do pretty much the same thing—they trade for a Courser. So I took the cheaper one to hopefully keep him bottled on mana," he said.

As it turned out, Cifka had all of the mana he needed – more than he needed, in fact. What he won't have is a second trophy to take home this weekend.

Utter-Leyton, on the other hand, still has a shot to grab the one thing that's been eluding him.

Josh Utter-Leyton defeats Stanislav Cifka 2-1 and advances to the Semifinals!