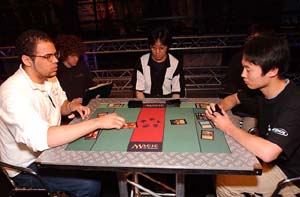 It seems like everyone loves Osyp Lebedowicz. Synonymous with his team, TOGIT, and also with irreverent counterfactual tournament reports, Lebedowicz spreads joy wherever he goes. Lebedowicz was the only Astral Slide player to make it to Sunday, perhaps evidence that the deck wasn't all it was cracked up to be, perhaps evidence of extreme hate, or perhaps just proof that Lebedowicz has skills that pay certain bills. Lebedowicz would have no trouble calling it the latter, but he'd do it with the same carefree only-kidding attitude he always carries.

His opponent is Akihiro Kashima of Japan. Kashima certainly looks the part of the Pro Tour player, despite this being only his first trip to the big dance. He definitely impressed, taking his home-brewed Green-White-Black Explosive Vegetation deck to the Top 8. Most players are thrilled to just make Day 2 of their first Tour. Now Kashima is in danger of running away with the whole thing.

Lebedowicz didn't need to think very hard to decide to keep his opening hand. Kashima was less fortunate. He stared at his first seven and counted his outs. He sucked in his breath and kept, visibly uncertain.

While Lebedowicz cycled through to a turn-three morph, Kashima did not have an easy road. Despite cycling Undead Gladiator he could not find a third land. Kashima called for the Exalted Angel, but Lebedowicz could only smile and deal two. Kashima breathed a sigh of relief. If his Gladiator served a land, it might not be too late.

Lebedowicz's good fortune was brightening his mood. He had a second morph at the ready, and this time it was the Angel. Kashima's third land chose this moment to turn up. Lebedowicz couldn't resist a good-natured "Oh how lucky!" though he immediately apologized. Kashima He made a morph to trade with Lebedowicz's first face-down, but was at six and facing a resolved Astral Slide and Exalted Angel. Lebedowicz hit again, then showed a Starstorm to save his Angel from Akroma's Vengeance. Kashima shrugged and grabbed for his sideboard. 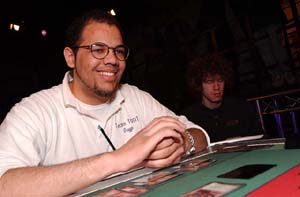 In the gallery above them was a virtual who's who of Japanese Magic, cheering on their man. Well, not cheering. All were watching rapt and silent. The same went for Eugene Harvey, Joe Crosby and Craig Krempels, following Lebedowicz's every move.

Both players spent the early turns cycling, but Lebedowicz was ready to trump Kashima's beatdown play of Undead Gladiator with Avarax. Kashima could only shake his head at the danger it represented. It fetched a friend and then traded with the Gladiator. Kashima decided his best line of play was to regrow and replay the Gladiator. Lebedowicz had something better than Avarax cooking: Exalted Angel.

Kashima took a hit from it then passed an uneventful turn, cycling Tusker at end of turn. Lebedowicz took the opportunity to remove his Angel with Astral Slide, protecting against Akroma's Vengeance. The Slide itself was too dangerous to Kashima, who cast Vengeance regardless. Lebedowitz slammed down Akroma, busting Kashima down to six. Kashima calmly played another Vengeance.

Avarax hit the ground running, and Lebedowicz had enough mana to knock Kashima to one. Kashima was out of Wraths, and held his ground behind Undead Gladiator and a morph. Lebedowicz had Starstorm, and when Kashima flipped up the expected Angel, Lebedowicz just played another Avarax and swung for the kill.

Lebedowicz fronted some changes, but his deck was already set. Kashima tried the same ruse. They shuffled and dealt their opening hands. Kashima looked at his and managed only a "Hm." He stared at the table, then back at his cards. He couldn't bring himself to keep. His next six were just as bad, and when he put them back on top of his deck to reshuffle, Joe Crosby could be seen pumping the fist from the gallery.

His five were good enough. He managed a turn-three morph, and Lebedowicz had a wry smile when Kashima put down his second white source.

Kashima grinned, flipped up his Angel and went to the face for four. Lebedowicz appeared unconcerned. He dropped Astral Slide with white up, which turned out to be for Akroma's Blessing. Kashima had Daru Sanctifier ready. Lebedowicz showed him another Slide. The Akroma's Vengeance in his hand would save him. He missed his sixth drop but had enough cyclers to buy some attack phases. Kashima thinned his deck with Explosive Vegetation and fetchlands. 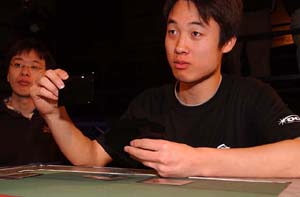 Lebedowicz dropped land number six and swept the board. Kashima's follow-up was a mere Ravenous Baloth, outclassed by Lebedowicz's Exalted Angel. Kashima dug with Undead Gladiator, looking for answers. He found none. Lebedowicz shut down his engine with Lightning Rift and Astral Slide, but Kashima's Daru Sanctifier and Demystify gave him more freedom to cycle. Kashima's Baloth swung in and Lebedowicz made him pay with Avarax. The life totals were twenty-one to nine for Lebedowicz.

Kashima cycled the card he drew, then made a face like he'd drawn a blank. Lebedowicz added an Avarax and charged. Kashima blocked both Avaraxes, and after Lebedowicz pumped to trade with the Baloth showed him Cruel Revival that got back Undead Gladiator. That in turn showed him Akroma, Angel of Wrath, who started swinging.

Lebedowicz had Vengeance to set Kashima back. Kashima returned fire with Krosan Tusker. But Lebedowicz had drawn another Astral Slide, as well as a land to make sure he had mana to protect the Akroma he'd just drawn. He took damage from the Tusker, then showed his opponent the door.