After months, the Argentinian National Team 1999 player, Pablo Huerta finally made Top 8 in a big tournament with his highly teched Sligh with Pyroblast main deck. His opponent was Matias Bollati playing Tradewind Survival and who was proud about his position. 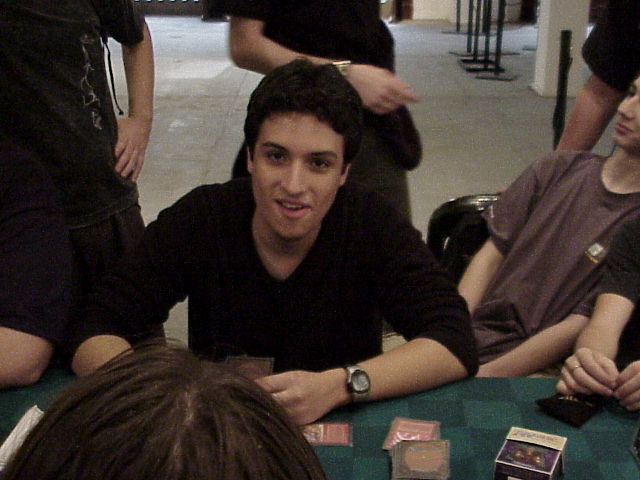 On his first turn he played a Cursed Scroll. Then both of them played some lands without casting spells. The action started when Bollati played a Tradewind and luckily, Huerta topdecked a Pyroblast to destroy it. Then he started the real beatdown with a Viashino Sandstalker. Matias drew a lot of lands but no spells. Finally, he drew a Survival of the Fittest but he had no creatures in his hand to activate it so he had to wait. By that time, Pablo had two Cursed Scrolls and Bollati's life was 7 so he decided to activate one Cursed Scroll at the end of Matias turn showing an Incinerate and on his turn cast the Incinerate targeting Matias and after that he activated the Scroll to win.

In the second game, Pablo took a mulligan.

Matias opened the game with a Birds of Paradise. Then Huerta tried to play a Seal of Fire but Bollati played a Force of Will on it. Then he cast a Bottle Gnomes. Pablo wanted to slow down Matias so he decided to destroy a Tropical Island with a Wasteland. After a few turns, he played a Cursed Scroll and started to kill weenie creatures like Birds of Paradise and Quiron Rangers. He could do so because he had two Fireblasts in his hand. Pablo waited until Bollati's life be 2 when he had to sacrifice the Bottle Gnomes. Then he threw the two Fireblast and won the game.