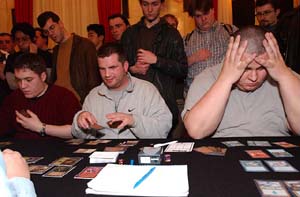 Last year at Osaka, this was the final match. The previous year's Finalists, Panzer Hunters stared down the recently-crowned Pro Tour Champions Phoenix Foundation. The win cemented the Foundation's place as the kings of the Team Limited. Boston kicked off the next season, and Budde, Baberowski and Blume were still undefeated in sanctioned matches. Now it's just assumed they'll take this title too. Panzer Hunters are not about to go quietly.

The first game to finish was Kazuyuki Momose versus Dirk Barberowski. Baberowski's evasive start was slowed by , while Momose hit the ground with Krosan Vorine and . He switched on his Abyss with Berzerk Murlodont, his Vorine outclassing Baberowski's creatures. When Baberowski's sixth turn had no play associated with it, it was clear that he was done.

Things were looking better for Phoenix Foundation in Kai Budde's seat. Reiji Andou's start was slow off the blocks, and Budde had already hit with and morph. took care of the first of Andou's blockers. Then and Crested Craghorn hit, costing Andou more creatures and pushing through more damage.

Itaru Ishida meanwhile was matching pace with Marco Blume. Though Master of the Veil trumped an early Sootfeather Flock, Blume's pressure was such that Ishida could keep up. Sage and Keeneye Avens teamed up to take down Blume's . Morphs appeared on both sides, but Blume's Glintwing Invoker gave him a slight edge. That is, until Ishida threw down , sending Blume's hands to his head in concentration. He didn't have eight lands, so trading wasn't an option. He took a bashing, then flipped up a pair of Mistform Seaswifts and sent the team. After the dust cleared it was just Seaswift and Master of the Veil versus Eel and . He followed up with morph and . Ishida went one better, smashing in with the Eel and then got back his birds with . Blume didn't have enough time to outrace the 6/6 in the air. Soon they were on to Game 2.

Andou had managed to stop Budde's beats with Gempalm Avenger enchanted with . Budde needed to regroup his forces, and that gave Andou the opportunity to start laying some defenses of his own. The game stalemated. Not so between Momose and Baberowski. Baberowski was stuck on three land, and Momose was punishing him for it. removed his first morph, and then Skirk Marauder answered the next. Skirk Outrider was joined by Branchsnap Lorian. Momose didn't even need the he had in his hand. It was a massacre. 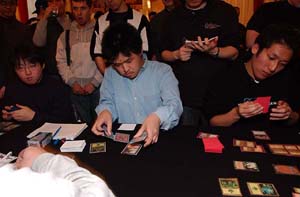 Ishida wasn't looking much better in Game 2 against Blume. He had been forced down to four cards by a series of landless hands. He almost made a game of it, but Blume was on the board with morph and Skirk Outrider before Ishida hit three land for a morph. Ridgetop Raptor powered up the Outrider, and the morphs traded. took down the Raptor, but Blume was ready with Mistform Seaswift, so the Outrider was still large and in charge. Ishida turned his attentions to Game 3.

Meanwhile, Budde had finally drawn , and used it with the help of Andou's Goblin Goon to assassinate much of Andou's team. Soon the way was cleared for an attack. Andou blunted it as best he could, but Budde's men were too big. Andou's forces dwindled with every attack. Krosan Cloudscraper even made an appearance. Soon enough Budde was up a game.

After trading for , Itaru Ishida looked to be ahead. He was swinging in the air with Keeneye Aven. A Seaswift traded with it, and then it was Ishida's morph versus Blume's Glintwing Invoker. He added , but Ishida was ready with . Then came the mighty . Blume was all but ready to pack it in. He held on for two more turns, but couldn't answer the beast. Budde's Masters Jinx was back in effect, and he hadn't even finished a second game.