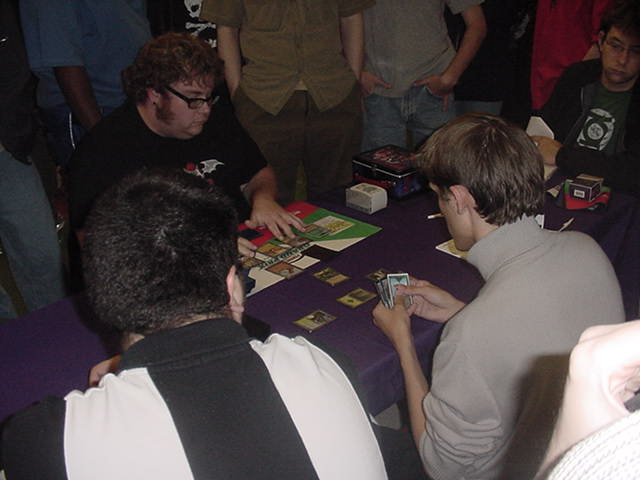 Nobody seemed to know what to make of Dave Petersen's Top 8 deck. He played a variation of Nick Little's nationals qualifying deck (19-Go) from Midwest regionals. Easily the most rogue deck of the Top 8, the deck was a four-color Braids deck with several card choices unseen in the current type 2 format. Most competitors dismissed the Braids deck as being outside the metagame after its fairly poor results at the various regionals. Petersen proved its viability by piloting the deck through the swiss, losing only one match. Petersen is a consistent ptq player in the Midwest and was Midwest regional champion in 98.

Pat Chapin, from Ann Arbor, Michigan, played an archetype that was very popular at the GP. Many competitors played various green/blue, squirrel nest/opposition variations. Chapin chose not to play the full lock of static orb in his version. He also played Compulsion, a card most of the g/u players passed on. Chapin has been one of magic's more eccentric and successful innovators. Chapin often develops technologies with fellow Top 8er Eric Taylor. The two players have surprised several Pro Tour metagames with their original designs. 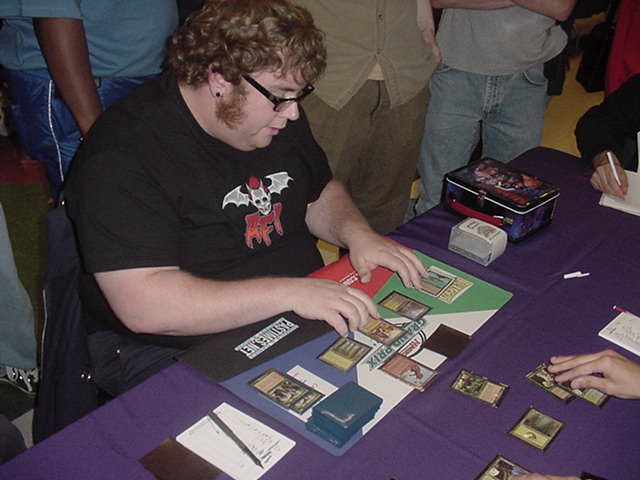 Chapin controlled the first game. His turn three Mongrel ran into Dave many times and was soon joined by two more Mongrels. All Dave could do to stem the Mongrel attack was a Flametongue Kavu that got countered by a Circular Logic and a Braids that was destined for chump blocking that Chapin countered. The lopsided game ended on the seventh turn when Chapin played an Opposition and started tapping Petersen's City of Brasses. Petersen now at three life, conceded.

Chapin sided very lightly, removing his two Compulsions for two Upheavals. Petersen sided in nine cards bringing in his three copies of Thunderscape Battlemage, Pernicious Deed, and Slay and removing his Mesmeric Fiends, Kavu Titans, Spiritmonger, Mystic Enforcer and one of his Braids.

Game two Petersen got to an ideal "19-Go" start by taking a damage from a land and playing a Bird of Paradise. He followed it up with a turn two Call of the Herd. Chapin tried to stop the beats with a Wild Mongrel but it looked fairly overmatched after Dave played a second Call from his hand. Chapin discarded to kill the first Call token and then dropped a Squirrel Nest in the hopes of stabilizing the board. Petersen threw down a Flametongue on his next turn though, clearing away the Mongrel and leaving Chapin with only squirrels to defend him. Chapin found another Mongrel to defend, but Petersen added a Blazing Spectre to the attack. Finally Pat seemed to get back in the game with an Opposition. Petersen played a Deed on his next turn though. He blew up everything on the next turn. His Call of the Herd that followed went unanswered and Chapin had to concede. 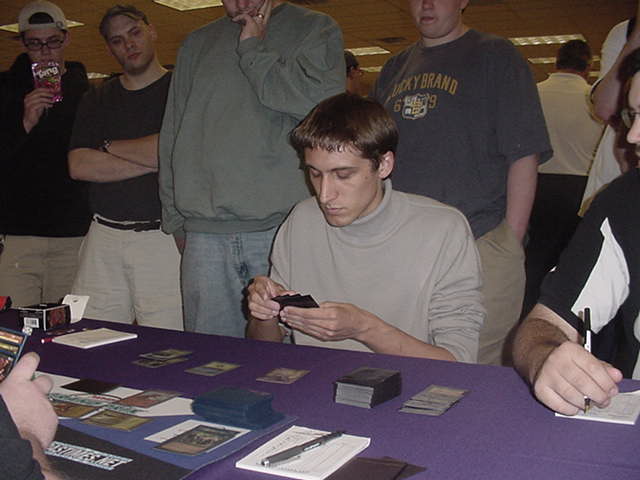 Game three, both players got accelerated starts with turn one Birds of Paradise. Dave developed very quickly getting another Bird down the next turn and killing Chapin's. The next turn Petersen chose to Slay Chapin's Basking Rootwalla, instead of flashing back his Firebolt and removing Chapin's newly played Merfolk Looter. He killed it the next turn with his second Firebolt, which Chapin responded to with an Arrogant Wurm. Petersen followed up with a Braids though and Chapin had to ship the Wurm since he was stuck on three lands. Dave seemed in control now playing a Deed after sacking a land on the next turn. Chapin played Fact or Fiction getting a Circular Logic and Squirrel Nest instead of a Counterspell, Merfolk Looter, and land. He played the Squirrel Nest. Dave sacked another land on his turn and soon discovered the error of his ways. His field of play was now two Birds, a Llanowar Elf and three land with Braids and a Pernicious Deed. Deeding for three and removing the Nest would mean eliminating half of his mana and leaving him with only three lands and a Braids in play. A poor position against Chapin's four lands. Sacking the Birds on the two previous turns would have left Dave with five lands and a Braids in play and a very solid board position. Dave was forced to sack the Braids to itself against Chapin's Nest and sat against Chapin's growing Squirrel army. Dave tried to get back in the game with a Blazing Specter, but Chapin had a Logic for him. Eventually Petersen blew the Deed. He followed up on his turn with another Braids. Chapin had another Squirrel Nest though and Dave was forced to sack his Braids again. Dave's last chance for a win was magic's most tried and true road to victory: BURN TO THE DOME! Chapin was at 11 and Petersen held three Violent Eruptions in his hand and still had two Firebolts in this graveyard. The trick was racing Chapin's Squirrel Nest and Rootwalla. Dave was still at 14 so it looked like he might be ok. His first and second Eruptions hit knocking Chapin down to three life. Chapin had a Circular Logic and lived to beat Dave down. Petersen couldn't stop the squirrels and died to the swarm.