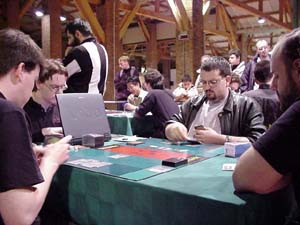 Pierre Malherbaud is the two-time French National Champion and no stranger to Grand Prix Top 8's. He made the quarterfinals of Grand Prix-London 2001. Patrick Mello is part of the same international super-team Godzilla that Kai Budde belongs to and is on a bit of a purple patch at the moment after finishing runner-up in Grand Prix-Lisbon and reaching the Top 8 of Grand Prix-Heidelberg.

Mello had managed to draft mono-black, with a Cabal Patriarch as the highlight. Malherbaud has a reasonable green-black deck and joked that he was playing Portal as virtually all his spells were at sorcery speed.

Mello won the die roll and chose to go first. Malherbaud had to mulligan but still busted out a turn 2 Wild Mongrel. Mello summoned a Dusk Imp in his turn that soon looked under threat as Malherbaud summoned one of the three Cabal Torturers in his deck on turn 3. Mello made a Gravedigger, nothing to get back but still a warm body nonetheless.

The Torturer dealt with the Imp and Malherbaud brought out one of his own. Mello continued to curve up as he laid his fifth Swamp and dropped a Zombie Assassin.

Malherbaud hit for four and continued to drop creatures as a Squirrel token and Crypt Creeper came onto his side of the board.

Mello thought carefully in his turn before dropping Shade's Form on the Zombie Assassin and sending it into the red zone. Malherbaud thought and then decided not to block. Mello pumped it three times and Malherbaud used his Torturer to reduce the damage to five.

This was also the same number Malherbaud swung for in his turn after Mello dropped the Gravedigger in the way of a Crypt Creeper.

A Squirrel blocked another big swing with the enchanted Assassin and then left Malherbaud a decision on what to attack with. He decided to be aggressive and sent in everything but the Torturer. Gouger traded with a card in the Frenchman's hand as it blocked the Mongrel and Mello went down to three life. Malherbaud then cast Tainted Pact and kept going until he found a creature he could cast – a second Torturer – as backup to hold off a potentially massive Zombie Assassin.

Mello couldn't kill either and the swarm of smaller creatures finished him.

Mello had awful luck in the second game. He mulliganed his first hand and then drew six Swamps. He had to mulligan this and then went down to five cards. 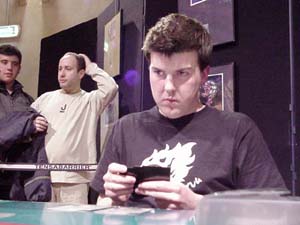 Malherbaud had a good curve again as a turn 3 Torturer followed a turn 2 Crypt Creeper. The hapless German was beginning to feel tortured himself as his deck refused to cough up a third swamp.

Malherbaud turned the screw with Acorn Harvest but then chose not to flash it back the next turn. This gave Mello the opportunity to nick it with a Gravegouger when he finally found a third land. The reason for Malherbaud not flashing it back became apparent as he used the land to cast Elephant Ambush at end of turn.

This left Mello in a horrible position. He had to block with the Gravegouger, but that would give Malherbaud access to two more Squirrel tokens.

A fourth land appeared to mock Mello and he Afflicted a Squirrel as a final act of defiance.