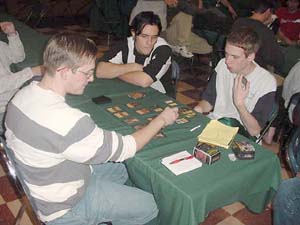 Eli Aden broke through at this tournament, hailing from the University of Tennessee in Knoxville. He's best known for attending tournaments and trading cards. Last year he earned three byes for GP Atlanta, but didn't do too well. At GP New Orleans, he finished just outside the top 64. His main goal this weekend was to come away with an amateur prize—finishing in the top eight certainly fulfilled this wish.

Patrick on the other hand, is a member of team TOGIT. Their team has been on a tear lately, but Patrick has other aspirations.

Patrick: "I'm not an up-and-comer. If I win, I'm going to use the prize money to promote my blossoming rap career."

Patrick won the die roll. Both players kept their hand, and Eli led with a first turn Festering Zombie, second turn Wretched Anurid. Patrick happily played Leery Fogbeast as a 4/2 wall to stop the beatings. It traded with the Festering Goblin, allowing the Anurid to come through. Eli then played a second Wretched Anurid, but Sullivan was ready with Ravenous Baloth.

The 4/4 beast couldn't do much though as Eli enchanted his territory with Cover of Darkness, naming Zombies. The game became a pure war of attrition, with Aden swinging at six a turn, while facing down Ravenous Baloth and Snarling Undorak (both of which could be sacrificed for four life). Eli played Cabal Archon, and used it to chump block and the Baloth. After sacrificing the Archon to bring Patrick to a precarious two life, Sullivan brought two creatures into play (a Glory Seeker and a morph creature), making Eli lose four life, bringing him to a very low three life. The next swing by Eli would have brought Patrick to negative four life, so the Togit player was forced to sacrifice both his beasts to keep alive.

Eli held two Profane Prayers in his hand, but there were no clerics on the board. This meant that all the Anurid damage finally caught up to him as Patrick's two creatures swung in for the win.

Eli got the beats down early again, playing a great curve of Festering Goblin, Disciple of Malice and Cabal Archon. Patrick once again had the Fogbeast, but Eli once again cast Cover of Darkness, this time naming clerics. By turn five the life totals were 20-13, with a Snarling Undorak coming in for the attack as a 4/3. Gluttonous Zombie joined the fray on the side of black, while Wirewood Elf joined the forest team.

Eli attacked for six this time, bringing Patrick to seven. Between Profane Prayers and his Archon, he was able to kill Sullivan with extreme prejudice.

As the competitors shuffled up for Game 3, several TOGIT teammates came on to check the status of the match with Patrick. Eli, on the other hand, beamed at already winning the top prize for amateurs, qualification for Chicago, and a minimum of $2,000.

The tone of this match definitely was much more lighthearted than the matches in the last round. Patrick joked with spectators even as he mulliganed. He didn't seem nearly as happy as he went down to five cards. 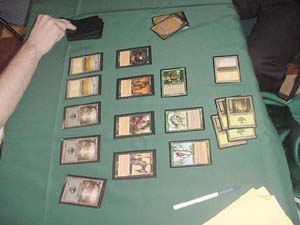 Patrick kept a five card hand, leading with three lands. Eli didn't get the blazing start of previous games, his first play a morph creature on turn three. He also stalled at three lands, playing Cabal Archon, while Patrick's land heavy draw led to a turn five Daunting Defender. The best Eli could manage was Wretched Anurid and Cover of Darkness (naming Zombies), having failed to capitalize on his fortunes early.

The wurm turned as Eli made the 3/3 cleric meet with a Cruel Revival. He swung with the team, dealing seven damage. The next turn, Patrick tried to stabilize with Dive Bomber and Taunting Elf. The flyer died to Eli's Profane Prayers, and Aden smashed down for another few points of damage. Aven Soulgazer came out to try to hold down the fort, but by then it was too late. Eli had Profane Prayers and Cabal Archons to finish off Patrick.

Patrick's hand, as the game ended, was Akroma's Vengeance and Whipcorder. He ended the game with five lands on the board.