Jakub Slemr is an old school magic player who won the World Championships a couple of years ago but has since faded from the spotlights. Today he’s back to regain some of his Glory playing a Blue/Green threshold deck. His opponent, Pedro Velhinho, is a newcomer to high level success but has proved to be up for the challenge with this top 8. He is playing a mono black deck. 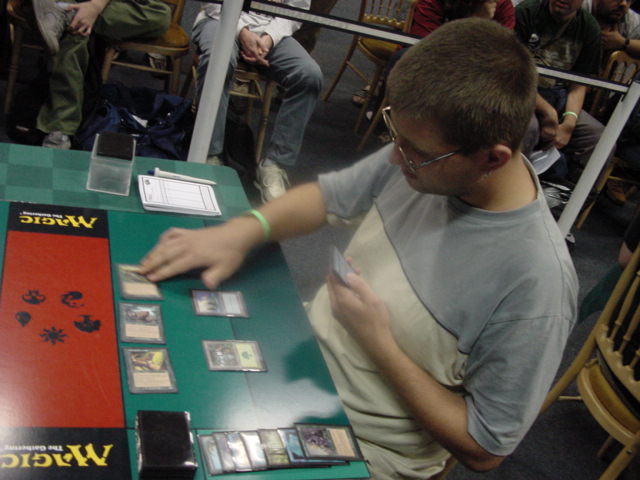 Slemr won the die roll and decided to play first. He thought long and hard about his opening hand but he kept it in the end. Slemr led with a Nimble Mongoose that got killed by an Innocent Blood. He drew a blue source on turn 2 and proceeded to Careful Study away a Rootwalla and a Roar of the Wurm. A Werebear followed soon after and forced Pedro to Tutor for Mutilate.

Jakub got one big attack in before Pedro swept the board triggering Jakub’s Standstill. Slemr was stuck on 2 lands at this point and was unable to flashback his Roars so when Pedro played a Haunting Echoes the next turn he lost every single spell in his deck.

He still had a Wild Mongrel and a Mental Note in his hand though, so he followed up his Mongoose with a Mongrel and killed Pedro the next turn with the Mental Note and the two creatures when Pedro decided to not look for an Edict or Blood with a Skeletal Scrying.

Pedro played first this game and he kept a hand with 2 Innocent Bloods, a Ghastly Demise and 4 land to make sure he’d survive till the late game to find his powerful spells. He took out the first three creatures Jakub cast and then played Rancid Earth on a forest.

He got punished soon after when the obviously colour screwed Slemr not only drew the Island he needed to cast his blue spells but also enchanted two of his lands with Squirrel Nests. Pedro managed to get rid of one Nest with a Tutored for Rancid Earth but the second combined with a Standstill ended the game in a couple of attack phases.

Jakub Slemt advances to the semifinals where he has to play the English Millikin Braids deck piloted by the one remaining Englishman in the GP.