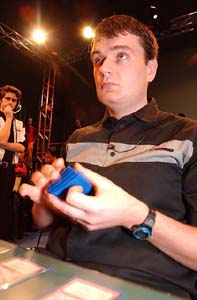 It's the vet versus the newcomer in this battle between two Europeans. Ireland's John Larkin is making his third Top 8 appearance, whereas Denmark's Peter Myrvig is having his best Pro tournament ever.

Larkin and Myrvig played this matchup in Round 13—blue/black Reanimator vs. Psychatog—and Larkin won 2-0. Myrvig rebounded in Round 14, beating Markus Joebstl who had the same deck as Larkin, to make the Top 8, so anything will be possible.

Brainstorm serves two very crucial functions in both decks: card selection when combined with shufflers like Entomb, Intuition, and Polluted Delta, and as a way to hide critical cards from opposing Duress and Cabal Therapy.

Both players spent the first few turns firing off a flurry of Brainstorms and shufflers to set up good hands. Larkin also had Careful Study for library manipulation, and dumped Visara the Dreadful and Verdant Force into his graveyard. Myrvig cast a Psychatog on turn three which allowed Larkin to resolve a Mesmeric Fiend on the following turn. Myrvig's hand turned out to be not very good after all, and Larkin was able to resolve Exhume on turn 4, putting Visara the Dreadful into play. The Fiend had Myrvig's Boomerang on lockdown, so the 5/5 flier wasn't going anywhere.

"Gorgon Legend!" cried the Irishman, who then added insult to injury by Reanimating the Verdant Force. Myrvig made one last attempt to win by Intuitioning for Wonder and two Accumulated Knowledges, but when Larkin Entombed his own Wonder Myrvig had no outs.

Normally the Reanimator deck sides in four Shadowmage Infiltrator against 'Tog, but because Myrvig knew the decklists, Larkin assumed he'd be bringing in Engineered Plagues, which render the Infiltrators useless. Actually, Kai Budde and Dirk Baberowski (among others) had tested this matchup extensively for Larkin and probably told him what to sideboard.

Myrvig started in game 2, and had a Counter for Larkin's turn-2 Duress. Larkin may have been able to sneak it in on the first turn, but decided he'd rather play around Force Spike. Larkin whiffed with a Cabal Therapy on the next turn and then Tutored for another copy. He was saddened when he saw Myrvig had hidden his one Edict with a Brainstorm and would have to play around it now.

Myrvig dropped a 'Tog on turn 5 and got one hit in before Larkin decided to get tricky. Knowing that Llawan, Cephalid Empress was his best way to handle the 'Tog, he Entombed the Legend and Reanimated her, sending Myrvig's 'Tog home. But what about the Edict? Myrvig decided not to respond to Llawan's comes-into-play ability, and gave priority back to Larkin with an empty stack. So Larkin sacrificed Llawan to flash back the Therapy, forcing Myrvig to discard the 'Tog.

The misplay on Myrvig's part didn't matter, however, as he simply Intuitioned for his final three 'Togs, played one, and killed Larkin with it on his next turn.

Game 3 wasn't really a game at all. Larkin mulliganed a hand containing Duress, Entomb, Wonder, and four land, and it went downhill from there. Mulligan to five. Then to four.

The only land Larkin's four card hand had was Volrath's Stronghold, and he never developed any kind of board position. He scooped in six turns. 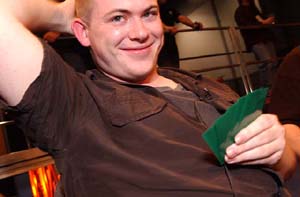 Larkin Duressed Myrvig's Edict on turn one and from there had no problem playing around the countermagic.

A Mesmeric Fiend took a Brainstorm, a Duress was Countered, and a second Fiend took a Boomerang. Myrvig did manage to get one 'Tog down and had just tapped out to put out a second when Larkin dropped the bomb he was holding: Llawan, Cephalid Empress.

With the coast clear, the three Torment cards hit Myrvig for six a turn until he was dead. Llawan has definitely turned out to be one of the more brilliant sideboard cards in the format.

Myrvig sideboarded a little differently for the deciding game, putting 2 Plagues and the Intuition back in, and taking out two Force Spikes and a Memory Lapse.

The Dane had to mulligan to start the final game, and looked only moderately satisfied with his six-card hand. Larkin went right to work on him with Duress, Duress, and Cabal Therapy, putting Myrvig on the defensive.

Myrvig had to tap out for a 'Tog on the third turn, and that's when Larkin went for it: Entomb/Exhume on Verdant Force. Larkin flashed back the Therapy with a Saproling because he had to keep Myrvig from Intuitioning for Boomerang. But Myrvig had a Memory Lapse and then a Brainstorm to find the blue bounce spell. He had taken one hit from the 7/7 and there were still three Saprolings in play when he bounced the Force, so he wasn't out of the woods yet.

Larkin had another trick up his sleeve: Cabal Therapy HIMSELF, naming Llawan. He discarded the 2/3 and then Reanimated it, putting the 'Tog back into Myrvig's hand. The Saprolings swung in for three.

Myrvig had an Engineered Plague for the Saprolings (there was some confusion over whether or not he named "Squirrel" for the Plague, but because he didn't speak clearly, intent was used.)

Llawan swung in to knock Myrvig to three, and a Mesmeric Fiend sealed the deal for Larkin.

The match was clearly all about Llawan. Larkin now faces Justin Gary in the semifinals.