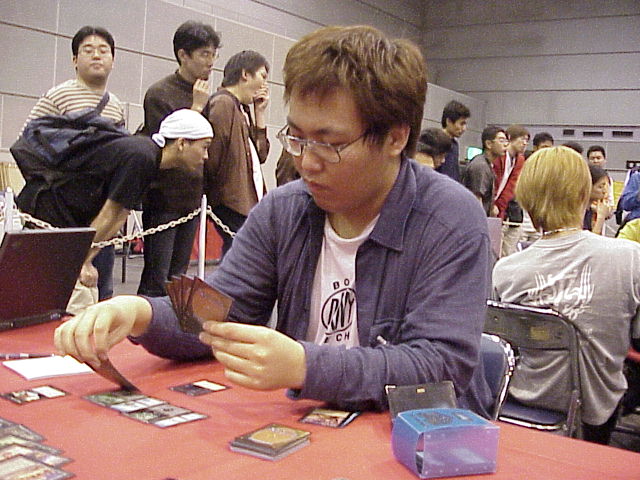 Ando played a first-turn Diligent Farmhand followed by Wild Mongrel. A Peek from Shiozu let him know that Centaur Archer and Demoralize were waiting in the wings. Shiozu made a Fledgling Imp for defence and passed the turn back. Ando sent both his creatures, and pumped up his Farmhand with Muscle Burst.

Shiozu was in trouble. Filthy Cur was not the best blocker. Ando's Archer showed up, and now Shiozu had to act. He passed the turn back without acting, letting four more damage through. Ando's team hired a Krosan Avenger.

Finally, at eleven life, Shiozu found a blocker in Stalking Bloodsucker. Demoralize made its appearance. Ando swung with his team. No matter how Shiozu looked at it, blocking meant using the Filthy Cur. He pushed both his creatures in front of the Archer, and Ando pitched two forests to his Wild Mongrel. After the dust settled, Shiozu was at one. He conceded next turn.

Ando kept a two-land hand going second. He played Wild Mongrel, but Shiozu had the answer with Innocent Blood. He further turned the tables with Filthy Cur, eager to redeem itself. Ando missed his third drop. 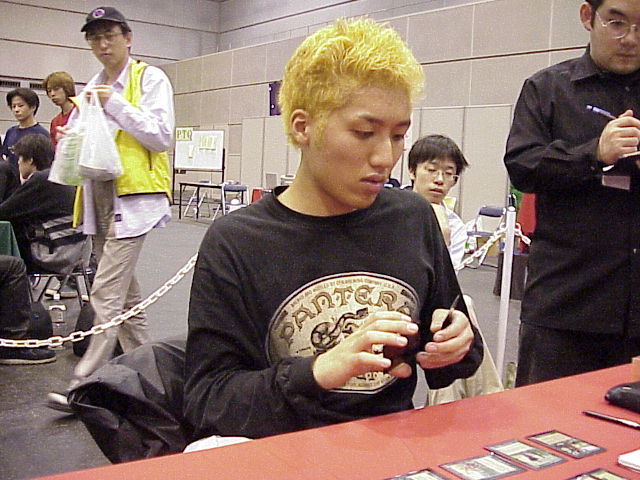 Shiozu, however, wasn't missing a beat. He played Dreamwinder, then Aven Windreader, then Zombie Assassin. Ando couldn't keep up with the beats and packed it in. The game took less time than the competitors did shuffling.

Ando, still hurting from his previous mana difficulties, had to Paris twice. He kept a hand of red mana, Mad Dog, and green cards. Innocent Blood took down the Dog, but Ando found a replacement. Then, Shiozu stalled at three land, and it looked like Ando had a chance. That chance evaporated on the following turn. Ando, despite being disgusted with his ill fortune, shook Shiozu's hand in congratulations.