Here in Pro Tour–Amsterdam, we have the most star-studded Top 8 seen in a long time, with just one name you may not recognise. Thomas Ma is on his very first Pro Tour, and hitting Top 8 on the first try puts him in a select club of players. Playing Jund, he tested for this Top 8 matchup with Conley Woods, trying his best to prepare for the White Weenie matchup. Ma's opponent, Paul Rietzl, qualifies as a veteran of the game despite being just 25. This is his third Top 8, and having prepared with the likes of Gabriel Nassif and Kai Budde, Rietzl seemed confident in his deck and in his plan.

Having finished higher in the Swiss rounds, Rietzl was on the play for the match, and led with Student of Warfare. He had a little think about his play for the second turn, before levelling up the Student twice. Ma cast a Lightning Bolt off Grove of the Burnwillows, to leave Rietzl with just a pair of basic Plains, each from Unlimited Edition. 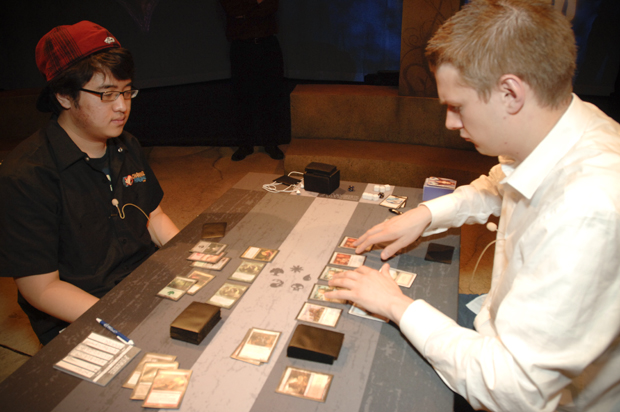 The Jund / White Weenie match-up is heavily tilted, but which way? It depends on whether you ask Thomas Ma, left, or Paul Rietzl.

Ma's follow-up to the blowout Bolt was a Tarmogoyf that grew thanks to a Spectral Procession from Rietzl. It cracked in for 4, and was joined by a twin shortly thereafter. With Savage Lands, Ma successfully got up to all three colours. Rietzl had intimated before the match that it would be reasonable to expect mana issues from Ma's Jund deck at some point in their match, something that is certainly less of a worry for White Weenie.

Paul cast a Ranger of Eos to find Student of Warfare and Figure of Destiny. He blocked neither Tarmogoyf for his turn, going down to 8. Ma, meanwhile, was upping his life total with Kitchen Finks. Honor of the Pure and those two conscripts found by Antoine Ruel's invitational card came down to give Rietzl quite the force.

When Blightning came from Ma, Rietzl had a little think before casting Brave the Elements. Ma responded by using Lightning Bolt to kill Ranger of Eos, but as Rietzl named green, he could not kill off the inevitable blockers from Rietzl that kept him in the game at a precarious 1 life.

"What am I missing?" asked Rietzl, as he looked down at the board. While Ma had knocked him down to 1 life, he had left himself open to a level up, and a big attack from Rietzl to end the game right there. He had a think. If Ma had a burn spell, he should just be dead. Was it a slow-roll, to throw him off for the match?

As Rietzl went for the lethal attack, Ma scooped up his cards. Thomas had simply missed the amount of damage on the board following a level-up, and had paid the price.

The fact that deck lists are shared and matches are best of five means that overnight testing and sideboard strategising is a key part of the Top 8 that is unlike a regular match on the Pro Tour.

When I spoke with Rietzl this morning before the match, he suggested that the sideboard plan that he had worked on with Nassif for the match-up might well surprise Ma, giving Paul an extra edge. While Path to Exile is quite good against Jund, Paul sided out the one that he had main, choosing to bring in Relic of Progenitus instead. That Burrenton Forge-Tender was coming would not be a surprise, but the Relic could throw a colossal spanner in Ma's works. Relic does a number on Tarmogoyf, Punishing Fire, and even the persist of Kitchen Finks, all the while offering a potential cantrip. With Ethersworn Canonist already making Bloodbraid Elf much less exciting, these small changes would allow the usually aggressive White Weenie to take the control role, cutting down Jund's victory conditions to the point that there is ample time to find a kill.

"That was the clunkiest hand ever," said Ma, quick to mulligan on the play. "Four Savage Lands and three Raging Ravine ...."

Unsurprisingly Rietzl had the first play of the game, and for this game the one-drop of choice was Steppe Lynx. Ma did have a turn-two Putrid Leech, though, meaning that the Lynx would need help to be able to attack in. That help came in an Arid Mesa, which let Rietzl attack for 4. He then added a second Steppe Lynx to the board, along with a Burrenton Forge-Tender, to serve as protection from the Jund Charm in Ma's sideboard.

Ma had a Kitchen Finks, and held back to block the attack that came from a fetch-land-pumped set of Steppe Lynxes.

"Hmm ...." said Rietzl. "This situation never occurred during playtesting. I don't have a play here." 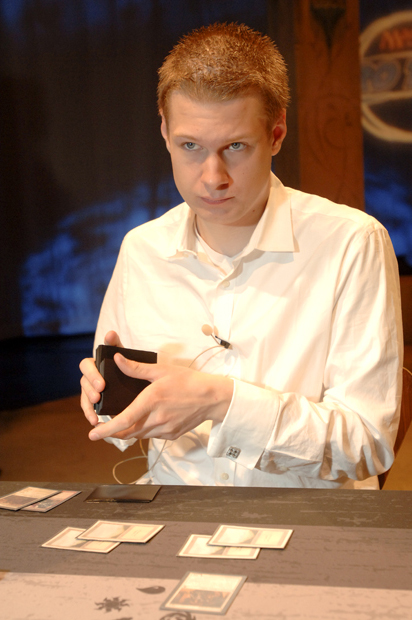 Rietzl simply watched on as Putrid Leech hit the grumper, and Kitchen Finks persisted. While Ma had a new Putrid Leech and a Tarmogoyf, he was on the back foot, to a Spectral Procession from Rietzl and a Relic of Progenitus to keep Tarmogoyf in check. Those Spirit tokens got stuck in, and soon Rietzl's hand was empty, as he played out a second Burrenton Forge-Tender, and an Ethersworn Canonist.

Ma had a second Kitchen Finks, whose life gain was keeping his head above water. Attacks from Ma saw the persisted Finks trading with Burrenton Forge-Tender, while Tarmogoyf got in for all of 2.

Regardless of what Ma might have been doing on the ground, the skies belonged to Rietzl, whose Spirit tokens just kept chipping away. Rietzl blew his Relic of Progenitus to keep Tarmogoyf small and draw a card. It grew up again more or less immediately when Ma cast a Smother on Figure of Destiny. That growth wasn't enough though, as a second Spectral Procession was sufficient to finish things.

Each player shuffled up and drew their opening sevens. Tellingly, despite having seen Relic of Progenitus do its thing, Ma did not seem to have changed his sideboarding plan for what could be his final game.

"That's always disheartening, right?" laughed Rietzl as Ma snap-kept his opening seven for Game 3. Rietzl was slower to keep, but keep he did, ready to see what Ma had for him.

Ma's quick keep took a big hit, as a Tarmogoyf was left fairly small by Relic of Progenitus. A Smother killing Figure of Destiny briefly let the Lhurgoyf get in, but this was very much temporary. It seemed that Paul was all in on his Relic plan, having kept a one-land hand and missed a land drop. When he did lay a Plains on turn three, he was happy to have Knight of the White Orchid, which was both bigger than Tarmogoyf and got Rietzl a land, putting him right back up to speed.

A second Tarmogoyf came from Rietzl, whose Relic was proving key. Ranger of Eos from Rietzl fetched a pair of copies of Burrenton Forge-Tender, meaning that if Ma was looking to use Jund Charm as a Pyroclasm, he would have to do it sooner rather than later, and he would be killing his own Tarmogoyfs in doing so.

Ma attacked with his Tarmogoyfs and used Punishing Fire to kill Ranger of Eos. Relic of Progenitus exiling Ranger of Eos meant that this was only 4 damage.

For Paul's turn, the first two plays were Burrenton Forge-Tender. A second Relic of Progenitus seemed a good one. Between the two Relics, Paul had ample way of stopping that Punishing Fire ever coming back.

Putrid Leech was finally a creature from Ma that would be unconditionally powerful. It would not block Spectral Procession's spirit tokens. Rietzl cast a Student of Warfare and levelled it up to level 2. A Jund Charm from Ma was stopped by Burrenton Forge-Tender, and all the while merrily removing cards in graveyards from the game with Relic of Progenitus. 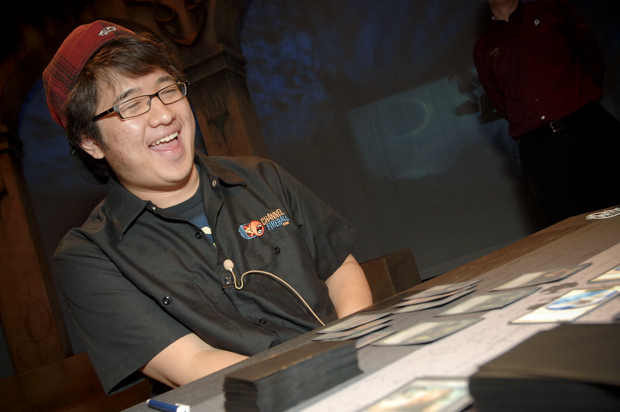 Even down two games to none, newcomer Thomas Ma just seems happy to be in the Top 8.

"This hurts me so bad," remarked Rietzl as he removed one of his cherished Relics from the game to draw a card. He immediately cast another one. Ma was laughing, but he was also in a lot of trouble. He cast a second Jund Charm, which was stopped by Burrenton Forge-Tender.

"So how do I lose this game?" asked Rietzl of himself. The answer he came to was losing his team to a third Jund Charm. As insurance, he fetched a new Burrenton Forge-Tender with Ranger of Eos. The next turn a Brave the Elements ended things in decisive fashion.

Following the game, Rietzl commiserated with his opponent. "Nassif and I were testing last night, and the match0up was pretty heavily in our favour. I think it was about 12-1 to us."

"I was testing last night, and the score was pretty much the same, but in the other direction."

"Who were you testing with?"

"With Conley Woods. I guess we didn't expect the sideboarding to go that way—facing two Relic of Progenitus each sideboard game is pretty rough."