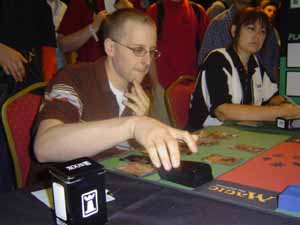 Alex Shvartsman in the Top 8 of a Grand Prix is hardly news. Lately, though, he’s been spending his time running his new Store King’s games, and so hasn’t been pursuing the Grand Prix circuit as diligently. In fact, earlier this year he was starting to worry about falling off the train. This weekend, though, he’s started setting his sights on a Masters Pro Points paycheck, and with a strong enough finish here, he could earn it with a Top 64 at Worlds. His “Bad Form” deck has served him well, crushing the dreams of countless goblin players. Poor Matt Severa, who chose the little red men this weekend. Severa hasn’t been playing much Magic at all lately, but his latent skills served him well and he smoothed his way to the Top 8.

Shvartsman won the die roll, and was noticeably confident about the match. He had a Shock for Severa’s Prospector, and then a Lightning Rift after Severa made a Sparksmith. He made another Rift and accepted three points of damage from Severa’s Smith and newly-summoned Warchief. A cycled Forgotten Cave took care of both of them.

Severa battled back with Clickslither, and Shvartsman was strapped for land. His fourth land was a Temple of the False God, and didn’t have a fifth. He cycled Lay Waste and didn’t activate his Rift, hoping to be able to Solar Blast the Clickslither. It was not to be. Severa’s Siege-Gang Commander would punish him for his stumble. Shvartsman drew a mountain and cycled Gempalm Incinerator, killing the Commander and two of his tokens. Severa was unfazed.

He started to attack, adding Goblin Burrows, then Goblin Warchief, then Gempalm Incinertor. Shvartsman Rifted the Warchief away in response, but Severa ate it and forced him to mana burn for his eagerness. The attack dropped Shvartsman to four. He untapped and pulled up the one card he needed: a mountain. He tapped all his mana and put down Form of the Dragon. Severa didn’t have long to find five points of burn, and soon succumbed.

Severa mulliganed his first hand, but really liked the look of his six. 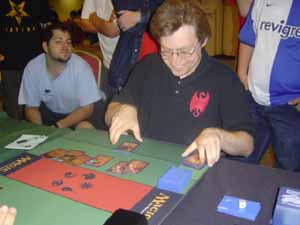 Shvartsman led with a sideboarded Sparksmith, quickly shocked by Severa. Turn three brought with it a Sulfuric Vortex, but Shvartsman paid it no heed. He got in with Thoughtbound Primoc. Severa, stuck on three lands, tried a Prospector, but it was Spark Sprayed. Shvartsman sailed overhead and Severa just sat there, praying for a fourth land.

Shvartsman increased the clock with Gempalm Incinerator as a creature. Severa was in a bind. He drew a Piledriver, shrugged, and played it.

This last as he was tapping six land to throw down Rorix.